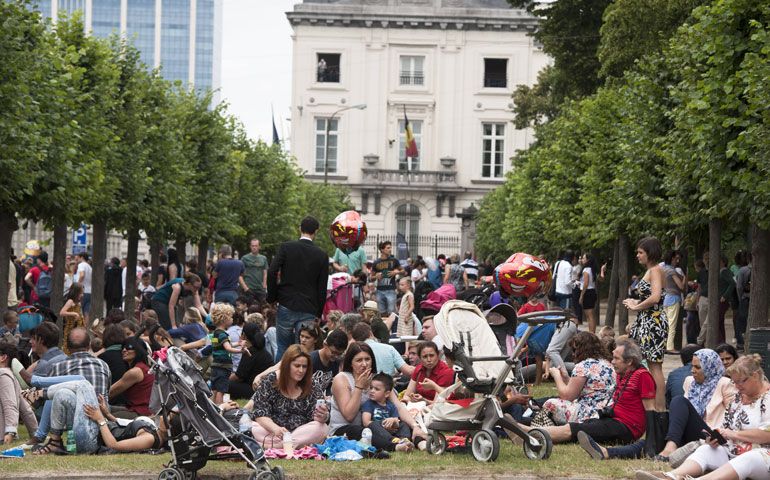 Warsaw, Poland — When Catholic bishops arrive in Rome this October to debate “the vocation and mission of the family,” most will have carefully diagnosed the situation in their own dioceses.

That task may well have proved hardest in Europe, where traditional notions of family life are being widely challenged. Yet while some Catholics think the church is losing ground in consequence, others are more optimistic.

“All European countries are seeing high rates of family breakdown, affecting Catholics as much as everyone else -- but none of this is actually new,” explained Maria Hildingsson, secretary-general of the Brussels-based Federation of Catholic Family Associations in Europe.

“Although there’s been a radical change in value systems here since the 1960s, there’s evidence that young people still want lasting family relationships. The church is sustaining these aspirations -- and in this sense its teaching is still highly relevant.”

When the Synod of Bishops last discussed “the Christian family” in October 1980 under the newly elected Pope John Paul II, Europe was still divided into East and West.

Since then, conditions have diversified, as economic advance, social mobility and mass immigration have had an impact on traditional structures. With access to contraception and abortion now taken for granted and new practices such as surrogacy becoming common, surveys suggest family life has been the area of greatest change.

The 47 member countries of the Council of Europe, with their combined population of 820 million, all concur on the value of family life. But while cohabitation is generally recognized with full property and inheritance rights, marriage rates have declined, and the average marrying age is now seven years later than it was in the 1980s.

Demographic decline has reduced the average household across Europe to 2.4 people, according to the European Union’s Eurostat agency. Though 70.8 percent of households with children still contain two parents, those with just a single parent make up 16 percent overall; a quarter of all children in Britain live in single-parent households.

Poverty levels contrast sharply too, as do relative costs of child care, rents and mortgages, and rules governing maternity and paternity, all of which are left to the competence of individual governments under EU subsidiarity rules.

Although divorce is recognized throughout the EU and affects a third of marriages, rates vary sharply.

So do attitudes toward same-sex marriage, which was first allowed in the Netherlands back in 2001. A total of eight EU countries -- Belgium, Denmark, France, the Netherlands, Portugal, Spain, Sweden and Britain -- currently permit homosexual marriages, while a larger number recognize same-sex partnerships.

However, seven countries -- Bulgaria, Croatia, Hungary, Italy, Latvia, Lithuania and Slovakia -- stipulate in their constitutions that marriage must be heterosexual.

Some Catholic bishops have seen some family trends as a symptom of rampant individualism, elevating personal and fulfilment over commitment and responsibility.

They’ve accused national governments of failing to support family life, despite clear obligations under the 1961 European Social Charter, whose Article 16 defines the family as “a fundamental unit of society,” and commits governments to promote it through all “appropriate means.”

Critics of the church say such politicians aren’t against the family as such, but are merely seeking social acceptance and legal protection for new forms of family life.

But some bishops reject concepts such as “single-parent families” as a contradiction in terms. They’ve criticized judgments by the European Court of Human Rights that appear to undermine or relativize family bonds. They claimed a victory this July, when the U.N. Human Rights Council in Geneva reminded states of their duty “to provide the family, as the natural and fundamental group unit of the society, with effective protection and assistance.”

For all the sound and fury, there’s evidence that deeper values remain intact.

In a recent European Values Study, 84 percent of young people said they considered family life to be “most important” -- well above friends, work, leisure or political beliefs.

“The existence of different forms of family life poses an obvious problem for the church, which holds up its model of a mother, father and children,” Angrit Gerhardt of Germany’s Catholic Familienbund, or Family Union, told NCR.

“Even among Catholic couples, however, real life often has little to do with church doctrine. The church now needs to see conditions as they really are and offer pastoral support for people living outside its ideal.”

Just how the church should do this has been reflected in answers to a Vatican questionnaire, sent out as part of the synod’s lineamenta, or preparatory documents.

Many European Catholics deplored the apparent gap between church doctrine and the realities of family life. They also highlighted the “incomprehensible language” used in some church pronouncements on family issues, and the undiscerning, judgmental attitudes routinely shown by local bishops.

Elizabeth Davies, marriage and family life project officer for the Catholic Bishops’ Conference of England and Wales, regrets that most people hear only “negative, superficial things” about church teachings.

They’d have a different impression, she thinks, if they read key documents such as Familiaris Consortio, the apostolic exhortation issued after the 1980 family synod, which lauded the “community of life and love” embodied in family relationships.

“Although there are issues here which people struggle with, the discourse is also changing, and the church’s pastoral practice is a welcoming one, especially when children need to be loved and respected, whoever cares for them,” Davies told NCR.

“The joys of family life are always much more important and sustaining than the difficulties. Love and togetherness are what’s most important -- so there’s much to be thankful and positive about.”

However true that may be, bitter divisions look set to surface at the upcoming synod, with liberal bishops pushing for change and conservatives determined to resist it.

In a report last March, the German Bishops’ Conference admitted most Catholics had responded to the Vatican questionnaire with calls for a greater openness to the divorced and remarried, as well as to same-sex unions and cohabitation.

Similar results -- with 70 percent of Catholics now favoring the blessing of same-sex partnerships -- emerged from a mid-August survey, which is to be presented at the synod.

Even then, Gerhardt thinks the German church hasn’t gone far enough, maintaining an idealistic picture of the family that comes close to ideology.

“Family life has always faced grave problems -- no one can claim the family in previous times was necessarily sacred and perfect,” she told NCR.

“Today, too, family life isn’t getting better or worse -- it’s just changing. If we’re to support it, we must take account of the variations and complexities and rely less on old rules and clerical doctrines.”

Just across the border, the president of the Polish Bishops’ Conference, Archbishop Stanislaw Gadecki of Poznan, served notice in June that his own church would resist “the theological direction presented by certain German-speaking circles.”

Here too, however, there’s been resistance, as households with single and nonmarried parents become increasingly common.

The Polish church hasn’t disclosed local responses to the Vatican questionnaire, and in June, its Family Commission chairman, Bishop Jan Watroba of Rzeszow, insisted “broad circles of clergy and faithful” were all “unanimous”: No one expected “any adaptation of church doctrine or moral teaching.”

However, in a March survey by Warsaw’s Public Opinion Research Center, up to three-quarters of Poles disagreed with their church’s stance on homosexuality and contraception, and favored a change in Catholic teaching on divorce and extramarital relationships.

In July, the bishops’ conference told Poland’s parliament and president to stop receiving sacraments when they enacted laws allowing sex change operations and state funding for in vitro fertilization.

Malgorzata Glabisz-Pniewska, a Catholic radio presenter, thinks the Polish church has also given “the family” the trappings of an ideology and proved selective in how it defends it.

Poland’s bishops have been repeatedly criticized for failing to speak out against poverty and exclusion in this overwhelmingly Catholic country, which boasts the EU’s highest levels of child deprivation and devotes fewer resources than any other EU state to family support.

Up to 3 million working-age Poles have gone abroad since their country joined the EU 11 years ago, leaving a whole generation of “Euro-orphans” to be brought up by grandparents.

The presenter thinks church leaders should issue fewer stern moral judgments and show a better grasp of the pressures and hardships facing so many families.

“It’s always easier to appeal to some ideal model -- and it would make the church’s task much easier if people really lived by this,” Glabisz-Pniewska told NCR.

“But while it’s important our church still defends the traditional family, it’s hard to see what it’s really offering to strengthen the family -- beyond merely trying to maintain the status quo.”

Be that as it may, the Polish church has powerful allies.

In traditionally Catholic Malta, which allowed divorce only in 2011, Bishop Mario Grech of Gozo warned of a “cultural tsunami” in an August pastoral letter but vowed his fellow bishops wouldn’t tolerate any change in church teaching.

An international “Filial Appeal,” urging the pope to resist “hedonistic propaganda,” has been signed by more than 471,000 Catholics, led by American Cardinal Raymond Burke, a former Vatican prefect.

Even if confrontation results, Davies of the Bishops’ Conference of England and Wales is optimistic.

She thinks the church everywhere, for all the contrasting postures, faces the same problems and wishes to help families preserve the faith and live a good life.

Most Catholics still cherish the Gospel values of faithfulness, honesty and integrity, she says. They don’t necessarily want the church to change its teachings -- just to apply them with greater sympathy and imagination, allowing those who’ve failed to live up to its ideals to feel worthy and valued.

Hildingsson from the Federation of Catholic Family Associations in Europe agrees.

Most Europeans, of all generations, concur that children can find love and support in a variety of situations, but will always be better off with the complementarity and clarity of a mother and father, she said.

Yet sharp differences also exist when it comes to social characteristics and aspirations; and these should be recognized account when the synod begins its work.

“Throughout its history, the church has been challenged to reach out to society, and this is especially evident today in family life,” Hildingsson said.

“It won’t be easy to find the right balance between pastoral and doctrinal approaches, particularly when so many people are already hostile toward Catholicism. But it’s possible to find ways of helping and supporting people which are suited to the times we live in.”

On the Web
Read more from Jonathan Luxmoore and the synod on the family:

An archive of NCR stories about the 2014 and 2015 Synod of Bishops on the family is online at NCRonline.org/feature-series/synod-family.

The U.S. and the Rise of ISIS