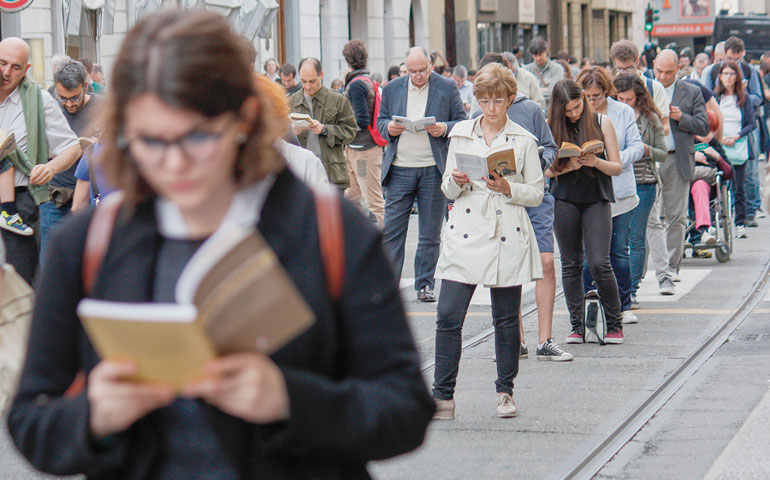 In Turin, Italy, on May 23, members of the group Standing Sentinels hold a silent vigil in support of the traditional family. (Newscom/ZUMA Press/Elena Aquila)

When Catholic bishops from Eastern Europe met in Slovakia in May to coordinate a strategy for next October's Synod of Bishops on the family, it was the latest sign of a looming feud over key areas of church teaching.

Though widely seen as pitting conservative and liberal church leaderships against each other, preparations for the synod are also stoking local conflicts in Europe, as bishops, priests and laypeople weigh in with appeals and demands.

"While we want the synod to help renew the church's pastoral outreach to families, we don't anticipate change in church dogmas," said Antoine Renard, French president of the European Federation of Catholic Family Associations.

"But there are clearly significant divisions over the synod already -- we can expect a battle when it eventually convenes," he told NCR.

The 14th Ordinary General Assembly of the Synod of Bishops, set for Oct. 4-25, will debate "the vocation and mission of the family in the church and in the contemporary world."

It will build on last October's Extraordinary Assembly in Rome and make recommendations to the pope on how best to transmit the faith and uphold sacramental life.

Summing up the 2014 assembly, Pope Francis insisted none of the participating bishops had "questioned fundamental truths," but conceded that differences had emerged over the church's doctrine and discipline.

Since then, however, divisions appear to have hardened, as supporters and opponents of change have pushed their agendas in interviews and articles, speeches and homilies.

When the Vatican sent out the lineamenta, or preparatory document, for the 2015 synod in December, it included a questionnaire on church teaching to be circulated via local dioceses.

How the questionnaire was handled seems to have reflected wider attitudes, with conservative bishops downplaying its importance and more liberal colleagues welcoming it.

Calls for change have been loudest in Germany, where the Catholic church makes up around a third of the population of 80.6 million but has been badly hit by public disillusionment and mass departures.

In 2013, Germany's Freiburg archdiocese drew up guidelines for making Communion available to divorced and remarried Catholics. The guidelines were roundly rejected by the German prefect of the Vatican's Congregation for the Doctrine of the Faith, then-Archbishop Gerhard Müller, who warned that the "entire sacramental economy" would be "swept aside" by such reforms.

However, other German church leaders defended the guidelines. Last December, a German Bishops' Conference report suggested most of the country's 66 bishops now concurred that sacraments should indeed be offered to divorced Catholics.

In March, Cardinal Müller criticized fresh claims by Cardinal Reinhard Marx of Munich-Freising, bishops' conference president, that his church now stood ready to "go down new paths" and "preach the Gospel in its own original way," rather than being seen as "a branch of Rome."

Yet the German church has pressed on. In early May, the bishops' conference amended its employment rules, so ecclesiastical staffers would no longer be fired automatically for remarrying or for forming gay unions.

Those involved in pastoral and catechetical work could still face dismissal for "serious breaches of loyalty," such as by promoting abortion or xenophobia, the bishops warned. Those who remarried or contracted civil partnerships would only face dismissal if their actions damaged "the church's integrity and credibility."

The change had been made, the bishops explained, to reflect "multiple changes in legal practice, legislation and society." It was welcomed by the church's Freiburg-based Caritas charity, whose 590,000 staffers make it one of Germany's largest employers, and by other Catholic organizations.

"Far fewer people are now living as Catholics here -- and it's good the church will now see people as individuals, rather than just generically," said Theodor Bolzenius, spokesman for the Central Committee of German Catholics.

"The relationship between church and state is very specific in Germany -- those who accuse us of being too permissive fail to appreciate current conditions." Bolzenius told NCR.

Catholic reformists are claiming some inspiration at least from Francis, whose November 2013 apostolic exhortation, Evangelii Gaudium, was extensively quoted in the lineamenta.

Evangelii Gaudium conceded that the papal magisterium should not be expected "to offer a definitive or complete word on every question," and cautioned against "a monolithic body of doctrine guarded by all and leaving no room for nuance."

"Pope Francis has called on bishops to exercise a wise and realistic pastoral discernment, and our own dialogue process has shown that access to the sacraments is a major issue for both lay Catholics and priests," a German church spokesman, Uwe Renz, told NCR.

"This is why the German bishops have taken their own steps -- keeping the Catholic community together in unity, but also encouraging hope, courage and a perspective for the future."

In March, the bishops' stance was backed by the influential German Conference of Superiors of Religious Orders, which urged "greater mercy" for remarried Catholics, as well as for gay and lesbian unions.

When it came to following consciences, Catholics were asking church leaders for less interference and greater trust, argued the conference, whose 430 members represent the country's 22,800 monks and nuns.

A "Filial Appeal to His Holiness Pope Francis on the Future of the Family" has been drafted and signed by conservative church leaders, including U.S. Cardinal Raymond Burke, former prefect of the Vatican's Apostolic Signatura.

"We see widespread confusion arising from the possibility that a breach has been opened within the Church that would accept adultery -- by permitting divorced and then civilly remarried Catholics to receive Holy Communion -- and would virtually accept even homosexual unions."

The appeal asks Francis to counter "hedonistic propaganda," by clarifying church teaching. By early June, more than 266,000 Catholics worldwide had signed the appeal.

In Italy, influential lay Catholics have also urged Francis to uphold the inviolability of marriage.

Meanwhile, in Britain, more than 460 priests signed an open letter in March in the Catholic Herald weekly, urging a "clear and firm proclamation" of Catholic teaching by the synod, and pledging "unwavering fidelity to the traditional doctrines regarding marriage and the true meaning of human sexuality."

The letter was endorsed in a separate appeal by hundreds of British lay Catholics, prompting a warning by Cardinal Vincent Nichols of Westminster against conducting debate about the synod "through the press."

In Poland, where the bishops have vigorously campaigned against "gender ideology," church leaders are still resisting school sex education and vowing to uphold a vigorous interpretation of teachings by the Polish-born St. John Paul II.

At their March plenary, the Polish bishops also reaffirmed the ban on Communion for remarried Catholics. It would mean "blessing a sin" and surrendering to "sentimental sympathy," a conference expert noted.

"The church internationally has betrayed John Paul II -- not as the bridegroom of Christ and the church of our faith, but in its pastoral practice," explained Archbishop Henryk Hoser of Warsaw-Praga, who heads the Polish church's Bioethics Commission.

"The church is supposed to offer a prophetic voice to the world by reading the signs of the times and predicting the consequences of attitudes," Hoser said. "However, much of it appears to have succumbed to the eroticization of human relations and new forms of social Darwinism."

Msgr. Jozef Koch, the Polish church's spokesman, says the bishops will outline their expectations for the synod at their plenary in June, but are confident Francis will prevent any misconceived changes.

"As the vicar of Christ, the Holy Father will decide what can be accepted -- in this sense, we've nothing to fear," Koch told NCR.

"At the Second Vatican Council, there was also intense debate on issues like these," he added. "So arguments and conflicts are quite normal, and we're confident we can make our position clear."

In Germany itself, some church leaders have urged advocates of change to show restraint, fearing they could provoke a conservative backlash.

In March, German Cardinal Paul Cordes, retired president of the Vatican's Pontifical Council Cor Unum, accused the reformist Marx of "irritating theological blurriness," and rejected his claim that "certain expectations" were now being directed toward Germany in the wider Catholic church.

Some of Marx's remarks were "worthy of the village pub" rather than of a serious church leader, Cordes said.

In May, the lay-led Central Committee of German Catholics voted unanimously at its general assembly to demand the blessing of second marriages and same-sex partnerships, as well as a "reassessment of contraception methods" and "a clear positioning against the still-existing exclusion of homosexuals."

This time, Marx himself went on the offensive, accusing the committee of making "hasty, raw demands" that were "incompatible with church doctrine and tradition."

Liberal church groups from around Europe took the initiative again a few days later. This time they appealed to the pope to open the priesthood to people with "special gifts," including women and homosexuals.

Renard of the European Federation of Catholic Family Associations thinks the many contrasting voices shouldn't be viewed as a cause of conflict.

"What's beyond doubt is that the church needs to review its approach to family issues at every level -- in this sense it's helpful to have such an intense debate," Renard told NCR.

"Every parish should be a family or families, and I think the synod should encourage priests everywhere to organize their pastoral work accordingly. This itself would bring greater benefits to church life than the changes in teaching which some people are now fighting over."

At their closed-door meeting in Slovakia, the Eastern European bishops vowed to do "all in their power" to resist "the influence of certain ideologies" and to ensure "the church's teaching on marriage and the family, especially as expounded by St. John Paul II, is increasingly appreciated and accepted."

The president of the Polish Episcopal Conference, Archbishop Stanislaw Gadecki of Poznan, chaired the meeting and used his keynote speech to denounce a litany of modern-day ills, including same-sex unions, divorce and contraception.

He warned against "modifying the church's discipline" for those in unmarried relationships, and urged "people with homosexual tendencies" to undergo therapy and not expect pastoral help.

Those favoring a more nuanced approach will have their work cut out for them.

Part 1 of this series appeared last issue. It's available online at NCRonline.org/node/103311.

A version of this story appeared in the June 19-July 2, 2015 print issue under the headline: European church gears up for battle at Vatican's family synod.