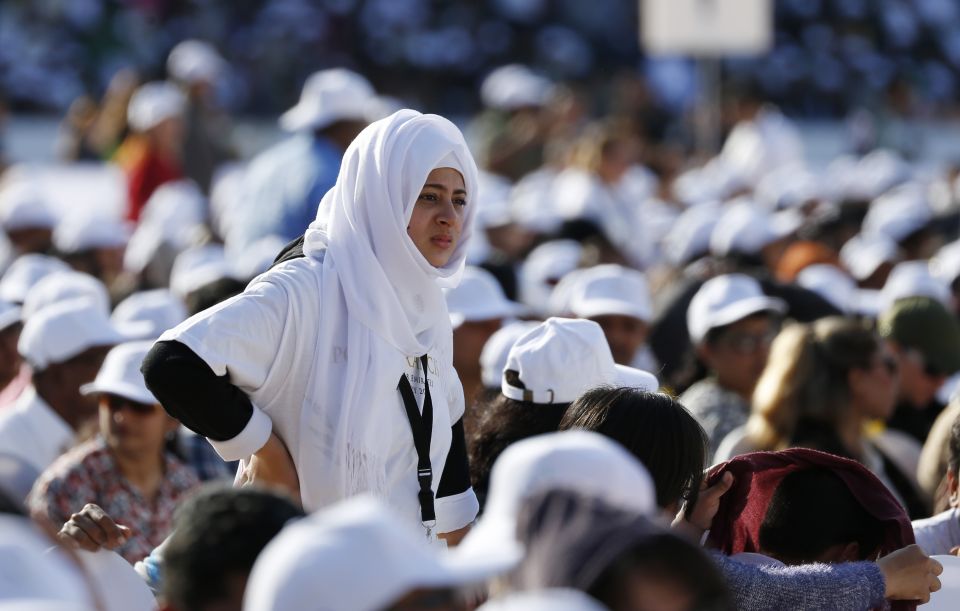 ABU DHABI, United Arab Emirates — Pope Francis sought to fortify the Catholic minority in this Muslim country Feb. 5, encouraging a dynamic but disenfranchised community of migrant workers and housekeepers to "face up to the trials of each day."

In a homily during what was likely the first public celebration of the Mass in the modern era on the Arabian Peninsula, the pope reassured Catholics here that God remembers and cares for them.

"When faced with fresh sorrow or a difficult period, we think we are alone," he told a crowd of some 40,000 inside Abu Dhabi's Zayed sports stadium and another 90,000 participating outside, who followed on jumbotron screens.

"In those moments, where [God] might not intervene immediately, he walks at our side," Francis told the people, who were listening quietly as many clutched white-and-yellow Vatican flags.

"If we continue to go forward, [God] will open up a new way for us," he said, mentioning the difficulty of being away from family. "The Lord specializes in doing new things; he can even open paths in the desert."

Francis was the first pope to come to the Arabian Peninsula, and the first to visit the UAE. He was visiting the country through Feb. 5 to take part in an interreligious conference and to encourage its Catholic faithful, which makes up about a 10th of the 9.3 million population.

Although the UAE is known for being fairly tolerant among its Gulf neighbors, the Christian community, made up primarily of Indian and Filipino workers, faces a number of difficult obstacles.

Because migrants are unable to gain citizenship, and thus unable to buy land, there are only eight parishes for some 900,000 Catholic worshippers. Evangelization is also strictly controlled.

Brandon Vaidyanathan, an Indian sociologist who spent four years of his youth in Dubai and has focused some of his research on the UAE church, said Francis was encountering a Catholic community that lives in a state of "permanent impermanence."

Because migrants have no path to citizenship in the country, anxiety is deep-seated, said Vaidyanathan, associate professor and chair of the department of sociology at the Catholic University of America.

"The anxiety of just not knowing — five years from now will I be allowed to stay in this country, or will they cancel my visa? — it is precarious," he said.

"It's an unusual way of living the sense of being pilgrims and sojourners," he said. "You know you're in a foreign land and you're not at home, and in some sense you're not wanted. That's a deep part of the psyche of someone in that environment."

Although the celebration of the Mass Feb. 5 was marked by an atmosphere of intense silence, the crowds were boisterous and loud beforehand. Prompted by an emcee to shout for Francis, many screamed "viva il papa" as the pope toured the stadium in a popemobile.

Francis reflected in his homily on Matthew's account of Jesus giving the Beatitudes. He called the eight blessings a "roadmap" for the Christian life.

"They invite us to keep our hearts pure, to practice meekness and justice despite everything, to be merciful to all, to live affliction in union with God," he said. "This is the holiness of daily life, one that has no need of miracles or of extraordinary signs." 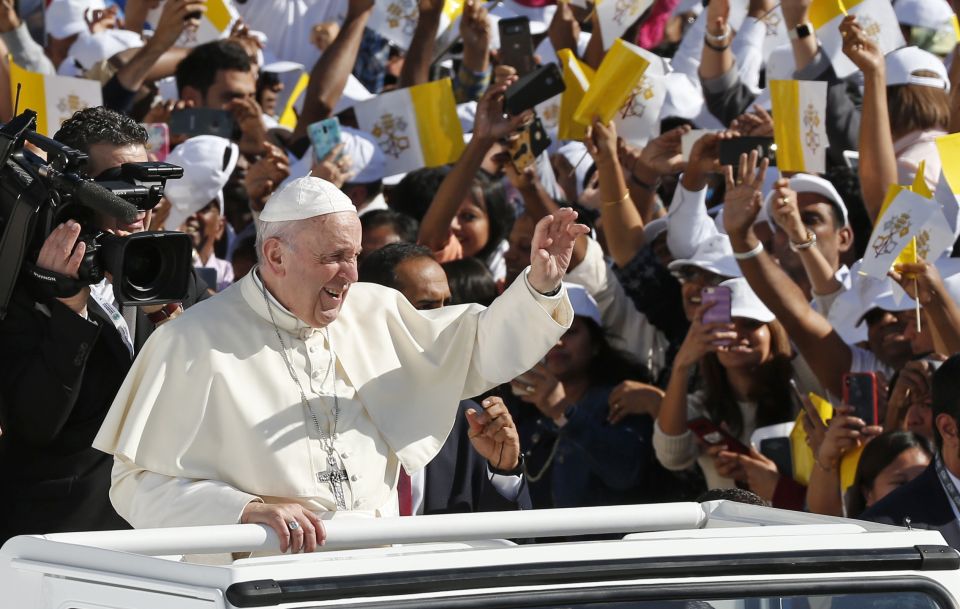 The prayers of the faithful at the Mass were said in six languages: Korean, Konkani, French, Tagalog, Urdu and Malayalam.

The Tagalog prayer asked that God would "bless all the migrants and workers that live in these lands: that their sacrifice and their commitment might blossom and sustain their families."

UAE authorities have sought to emphasize their country's tolerance of various religious communities. In one sign of such efforts, organizers said that about 4,000 Muslims attended the Feb. 5 Mass.

Earlier in his visit to the UAE, Francis had urged religious leaders to renounce all forms of support for violence.

In an address to hundreds of Muslim, Christian, Jewish, Hindu, Buddhist, and Sikh representatives at an interreligious conference Feb. 4, the pope called it a "duty" of the world's faiths to reject "every nuance of approval" for war.

Antonio Banderas may be cast as Pope Francis in biopic