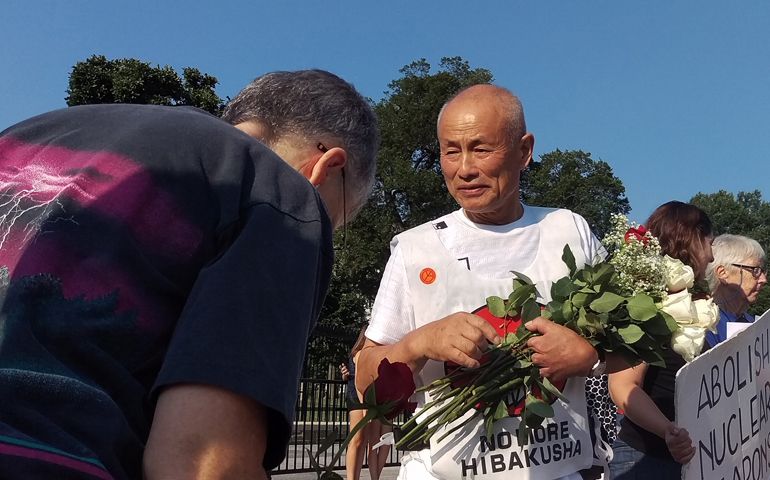 Hiroshima survivor Toshiyuki Mimaki receives roses from a peace activist in front of the White House in Washington Aug. 6, the 71st anniversary of the U.S. dropping an atomic bomb on Hiroshima, Japan. (CNS/James Martone)

Washington — Maimed and fleeing people, charred paper falling from a strangely colored sky, and a father who didn't return were some of the very early but vivid memories Hiroshima survivor Toshiyuki Mimaki recalled Aug. 6.

He shared his memories with a group of activists in Washington exactly 71 years since the U.S. atomic bombing of the Japanese city in 1945.

"The heat and blast from the bomb was so intense that it was if the sun had exploded," Mimaki told about 30 people gathered in front of the White House in sweltering summer heat.

The group included members of Catholic movements working to end nuclear weapons. They had gathered to "apologize" for the Hiroshima bombing, and for the bombing three days later of the Japanese city of Nagasaki Aug 9, 1945, both of which culminated in the death and maiming of hundreds of thousands of people, the activists said.

"Now 71 years have passed," said Mimaki, who was 3 at the time of the bombing, for which the U.S. has never officially apologized.

At Mimaki's feet lay black-and-white images of the explosions' ensuing havoc, including charred bodies, destroyed buildings and a child looking shocked and wide-eyed into space.

"The victims are all old but haven't lost hope that nuclear powers, including the U.S., the U.K., France, Russia (and) China, lead the world in coming up with ways to get rid of nuclear weapons," Mimaki told the group, through an interpreter.

Last year, Pope Francis marked the 70th anniversary of the atomic bombings of Hiroshima and Nagasaki with a reiteration of the Catholic church's call for a ban on nuclear weapons and all weapons of mass destruction.

The bombings still incited "horror and revulsion" and were symbols of "the vast destructive power of human beings when they make distorted use of scientific and technical progress," Pope Francis said at the time.

Ahead of Mimaki's testimony at the hourlong gathering in front of the White House, Art Laffin, a member of the social justice organization Dorothy Day Catholic Worker, called on the United States to repent for the bombing of the two Japanese cities, and to halt its nuclear arms program.

"We call on our nation to join with us in repenting for the colossal sin and crime of building and using nuclear weapons, to personally apologize to the Japanese and A-Bomb survivors ... and to demand an end to ongoing criminal nuclear war preparations," he said.

The U.S had spent nearly $10 trillion building and perfecting its nuclear arsenal since 1940, and an estimated trillion more would be spent on modernizing the arsenal over the next three decades, said Laffin, who helped organize the Aug 6 event along with Pax Christi Metro-DC, Columban Center for Advocacy and Outreach, Isaiah Project and the Sisters of Mercy Institute Justice Team.

"This upgrade of the U.S. nuclear arsenal is a blatant violation of the Nuclear Non-Proliferation Treaty and constitutes a direct theft from the poor," Laffin claimed in a reflection he'd written to open the gathering.

After Mimaki's remarks, participants read aloud a so-called "Apology Petition" to "the people of Japan" for the 1945 bombings.

"As citizens of the United States, we invite people to publicly ask God for forgiveness for the U.S. atomic bombing of Hiroshima and Nagasaki, which caused the immediate death of more than 200,000 people, and hundreds of thousands more who died in the aftermath as a result of radiation poisoning," they read aloud.

"Pope Paul VI, in his 1976 World Day of Peace Message, described the bombings as 'a butchery of untold magnitude,'" said the petition, quoting the pope.

The participants then showered roses on Mimaki -- red for sacredness and grief, and white for hope.

As the gathering ended in Washington, 10 days dedicated to eradicating nuclear weapons and other means of war got underway in Japan, at the behest of that country's Catholic bishops' conference.

"World peace has been shattered and is constantly threatened by such events as the Syrian War, terrorist activities by fundamentalists and others, armed conflicts involving control of resources and hegemonic shows of force," stated the president of the Catholic Bishops' Conference of Japan, Nagasaki Archbishop Joseph Mitsuaki Takami.

"Depending on the power of humanity and the grace of God," the Aug. 6-15 observance in Japan will focus on "eliminating not only nuclear weapons but all types of weapons and violence from the world," said Takami in a message posted on the conference's website.

The 10-day period was chosen to coincide with the Asian nation's Hiroshima and Nagasaki Atomic Bomb Memorial Days and its commemoration day for the end of World War II, the archbishop added.

After the Washington gathering, participant Marie Dennis told Catholic News Service that she'd been "touched" by Mimaki's testimony, and by a photo she'd held throughout, depicting "hundreds and hundreds of skulls from Hiroshima."

"I was very aware of the fact that I have seen the same reality in Phnom Penh in Cambodia, and Auschwitz, and Sarajevo, and in Guatemala, and I believe that it is time for the human community to find other ways to resolve our conflicts," said Dennis, co-president of the Catholic peace movement Pax Christi International.

Mimaki told Catholic News Service afterwards that what most moved him about the gathering was the fact that it took place at all in a country where many still dispute that the atomic bombing of Japan was necessary to effectively end World War II.

"I am so touched by them," he said of the gathering's participants.

"Even though it is far from Hiroshima ... people got together to commemorate the anniversary today," he said.

Government workers were kept in the dark about their toxic workplace