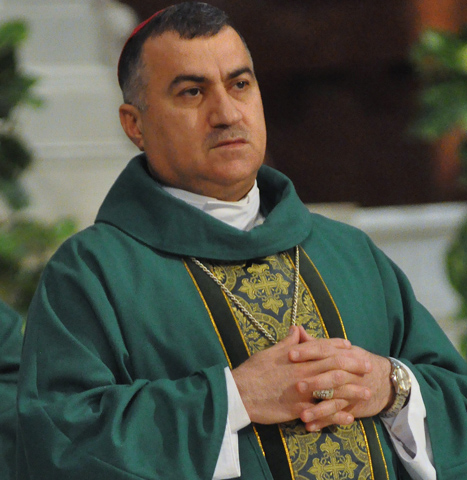 Chaldean Catholic Archbishop Bashar Warda of Irbil, Iraq, concelebrates an Aug. 23 Mass at SS. Peter and Paul Cathedral in Indianapolis. The archbishop visited several U.S. cities and discussed his experience with the flood of Christian refugees to Irbil following the Islamic State's capture of Mosul and the Ninevah Plain. (CNS/Sean Gallagher, The Criterion)

Chaldean Catholic Archbishop Bashar Warda of Irbil, Iraq, placed his face in his hands when asked how his faith has been challenged and changed in the crisis he has helped manage over the past year.

He said he has outwardly encouraged the Christians whom he welcomed to Irbil when they fled Islamic State, but within his heart he would frequently "quarrel with God."

"I don't understand what he is doing when I look at what has happened in the region," Archbishop Warda said. "I quarrel with him every day."

However, the arguments take place within his intimate relationship with God, one that, with the help of grace, withstands even the previously unimaginable challenges to his faith that he has faced over the past year.

"Before going to sleep, I usually hand all my crises, wishes, thoughts and sadness to him, so I can at least have some rest," Archbishop Warda told The Criterion, newspaper of the Archdiocese of Indianapolis. "The next day, I usually wake up with his providence that I would never dream about."

Looking back over the year since more than 100,000 Christians and other minorities sought refuge in Irbil, Archbishop Warda said he sees the care of God coming to suffering believers more effectively than he could have ever devised himself, in part through local lay and religious Catholics and organizations like the Knights of Columbus, Catholic Relief Services, the Catholic Near East Welfare Association and Aid to the Church in Need. His archdiocese in the Kurdistan region of northern Iraq has, with the help of Catholic relief agencies, provided shelter, food, medical care and educational services to the displaced.

"(God) did it in a way that a state could not really offer to its citizens in such a situation," Archbishop Warda said. "He did it through the church and through the generosity of so many people."

His own faith is bolstered as well when he sees the undaunted faith of displaced Christians.

"People come and tell their stories of persecution and how they were really terrified, having to walk eight to 10 hours during the night," Archbishop Warda said. "In the end, they would tell you, 'Thank God we are alive. Nushkur Allah. We thank God for everything.' That's the phrase they end with. That's strengthening, in a way."

In contrast to the goodness he sees in the suffering faithful that have filled Irbil, Archbishop Warda recoils when he describes the Islamic State, which he often refers to by its Arabic "criminal name," "Daesh."

And he knows that the evil that overtook Mosul could also strike Irbil.

"It's quite possible, but the coalition, led by the Americans, has stopped Daesh from advancing," Archbishop Warda said. "This has given some sense of security to the people. But Daesh is just 40 kilometers (25 miles) from Irbil. It's not far away. Anything could happen."

This uncertainty and the horrific experiences of the past year have led many Christians who fled to Irbil to move on to refugee camps in Jordan, Lebanon and Turkey with the intention of emigrating from the Middle East for good -- something that saddens Archbishop Warda.

"They lost trust in the land and their neighbors," he said. "Everyone has betrayed them and treated them as a treasure to be stolen, took their houses and property. Their daughters were under threat at any time."

The thousands who remain in Irbil have moved from makeshift shelters on church properties and in public schools to prefabricated houses and pre-existing homes provided or rented by the church. Some want to stay in the region and are seeking jobs to support their families.

"All of them are waiting for Mosul to be liberated so that they can go back again and start their life again," Archbishop Warda said.

An important step that he thinks will help galvanize the international community to help Iraqi Christians is for national leaders to join with Pope Francis and recognize what is happening there as a genocide. He spoke of this in Indianapolis -- where he visited his fellow Redemptorist, Archbishop Joseph W. Tobin -- and in Washington.

"It's genocide. It has all the facts, events, stories and experiences to meet the definition of genocide," Archbishop Warda told The Catholic Standard, newspaper of the Archdiocese of Washington.

Recognizing the genocide would mean "those people are not forgotten," the archbishop said. "They are remembered and acknowledged. Their sacrifices and experiences are not forgotten. We'd be giving them just status, to help the world not repeat (this)."

"Do not wait another 20 years and look back to what happened and say, 'Well, I'm sorry that we did not do something really decisive,'" he told The Criterion.