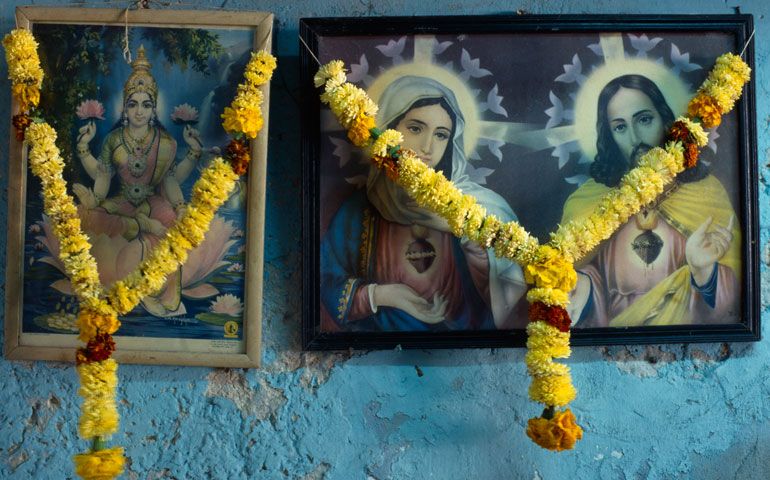 Framed pictures of Hindu and Christian iconography hung with marigold flower garlands are seen in India. (Newscom/Eye Ubiquitous)
This article appears in the Synod on the Family feature series. View the full series.

Bangalore, India — The growing phenomenon of Catholics marrying outside the faith and the challenges that it poses to the church in Asia -- especially in countries like India, where Christians are a minority -- was the subject of discussion at a recent gathering of Asian moral theologians.

Fr. Michael Peters, an Indian moral theologian who studied mixed marriages in several archdioceses in southern India between 2005 and 2010, said his survey revealed "a clear indication" that such marriages are steadily growing in the country.

In light of this trend, the church is rethinking its earlier rigid stand against marrying outside the church and is open to serving couples in this situation, Peters found, but significant challenges remain.

According to the Missionaries of the Precious Blood priest, the new trend is the result of the technological revolution of recent years that has brought drastic changes in how young people form relationships.

Peters was among three theologians who dealt with "Family and Marriages: Challenges and Hope" during the July 17-20 pan-Asian meeting of Catholic ethicists in Bangalore. The conference addressed "Doing Catholic theological ethics in a cross-cultural and interreligious Asian context."

Peters' paper, "Inter-faith Marriages from a Faith-Moral-Pastoral Perspective," found that information technology is a major contributor to the trend of mixed marriages in Asian countries.

On one level, he said, information technology itself connects young people together across religious, caste and cultural divides.

On another level, the information technology industry creates working environments that bring together legions of young hires from diverse backgrounds into the same physical location and allows them to interact with each other.

"In this scenario, our youngsters fall in love, and religion and faith at that point matter less," Peters said, adding that such relations often end in marriages between parties of different faiths. "Their hearts are united while they differ by their faith."

Even the working paper for the Vatican's upcoming Synod of Bishops on the family has noticed this trend, he says. The document acknowledges that spouses in many Catholic families in Asia, North Africa and other regions are people from other religions.

While these couples bring "great richness to the church," Peters said, they also pose difficulties, especially in countries where religious affiliation has implications in civil law. In India, for example, different religions have their own sets of personal laws that govern matters relating to family life, such as marriage, divorce and inheritance.

What is positive in all this is the church's ability to evolve with the times, said Peters. The church that had earlier banned Catholics from marrying people of other religions now allows such relations under a dispensation called "disparity of cult," provided the couples agree to raise their children as Catholics and the Catholic partner continues to practice the faith.

The church's earlier rigid stand caused a great deal of stress, animosity, misunderstanding, hurt feelings, and "loss of family relationship and at times faith in Christ, if not in the Mother Church," Peters said.

The church has the duty to educate its people on family and moral values since its primary task is to evangelize the world and re-evangelize the evangelized as part of her Christ-given authority to save souls, Peters said.

Despite changes in the church's pastoral practice, many challenges remain, Peters said his research found.

Often, he found, the biggest hurdle for mixed marriage is not the church but the couple's parents and relatives who are not open to the marriage.

The church, too, is challenged to provide pastoral care to families of mixed marriages, Peters said. These challenges include:

Another practical problem is the burial of the non-Catholic partner. "Will the church that blesses the couple of disparity of cult allow the non-baptized partners to be buried in the Christian cemetery?" Peters asked, adding that the church has no common rule on such matters. Each bishop can decide the matter according to the local pastoral situation.

Peters also found that the church's outreach to mixed marriages ends with the wedding. All dioceses in India have marriage preparation programs that both the Catholic and non-baptized partner must attend, but only about 5 percent of dioceses have post-matrimonial programs for those married under the disparity of cult dispensation. That, Peters said, is an urgent need.

To ensure that the Catholic partner in a mixed marriage continues to practice the faith, he said, the church needs programs to help couples build their bonds and live with mutual respect and love.

Parishes should help to identify such families and pastors should invite the couples after a year of marriage for "cordial meetings" to find out their well-being.

Peters has recommended that dioceses prepare short, preliminary programs at the deanery level for these couples. Using the experience of these meetings, church leaders could draw up a post-matrimonial program for spouses of mixed marriages conducted by diocesan family commissions with the collaboration of parish priests and experts in family apostolate.

A big challenge for the church is to help Catholic spouses and their partners defend family moral values "in an emerging technological and globalized world where religious values are often overlooked" and individuals are reduced to "mere producing machines," Peters said.

No healthy human society can be established unless family moral values are protected and defended in such a scenario, he said.

The national bishops' conferences and diocesan family commissions have to develop ways to care for such families and help the spouses to understand each other and the moral values in their partners' religious traditions, respect and practice them in their families.

[Jose Kavi is the editor in chief of Matters India, a news portal focused on religious and social issues in India. This article is part of a collaboration between NCR's Global Sisters Report and Matters India.]

Haunted by its history, Berlin debates whether to restore the kaiser's gilded cross