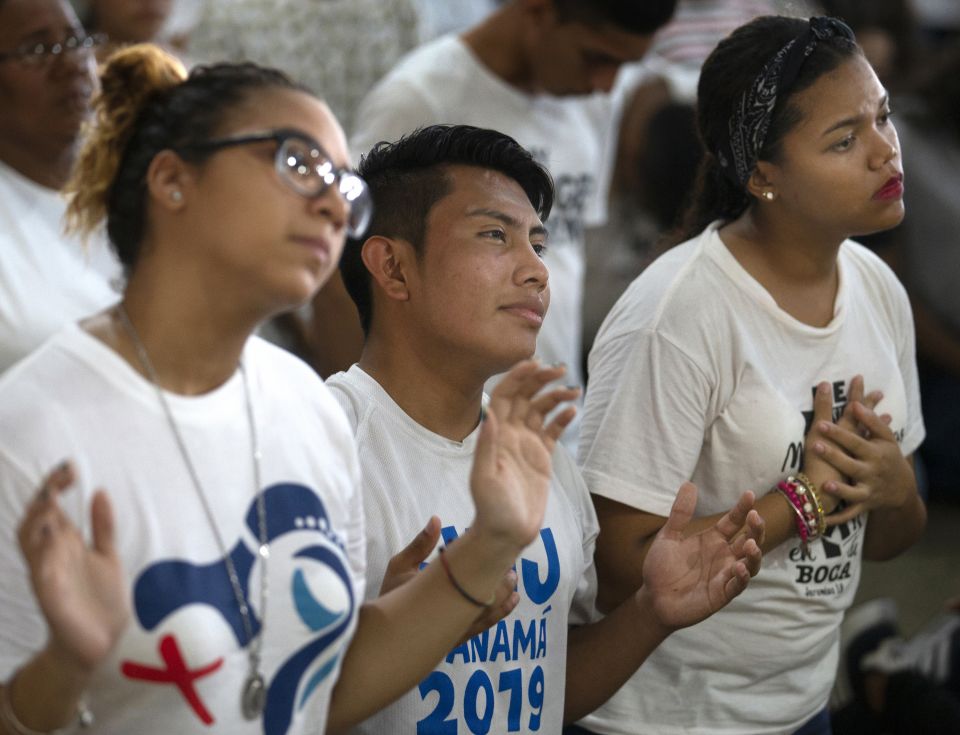 Yassiel Barranco, 21, Ivan Lopez, 20, and Liz Marie, 17, pray during a vigil for young people at the Church of Christ the Redeemer April 22 outside Panama City. World Youth Day 2019 will be celebrated Jan. 22-27 in Panama City. (CNS/Bob Roller)

Panama City — The Church of Christ the Redeemer was built with Panama's hot and humid weather in mind. There are no walls on the building. Its tall round roof is supported by cement columns spread far apart so that a good amount of breeze can make its way down the church's aisles.

But there was no way to stave off the heat in April as a group of some 500 young men and women packed the large church to pray and dance at a service in preparation for next year's World Youth Day.

The young people swayed back and forth, waving their arms joyfully, as they sang a hymn about being "invaded" by God's love. A volunteer who led the service urged them to invoke the Holy Spirit and to pray for young people who had lost faith in themselves.

"I think that World Youth Day will help us to grow spiritually," said Ivan Lopez, 20, who attended the prayer service. "There are many young people who have drifted away from the church, but this will help us to strengthen our parishes."

Panama will host the 16th World Youth Day Jan. 22-27. It will be the first Central American nation to host the massive event, which will include a music festival, dozens of seminars for youth and an expected four-day visit by Pope Francis.

For many of the young people in Panama who are already preparing for this event, however, World Youth is not just about prayer and reflection. Organizers hope the event will strengthen parishes and provide them with an incentive to keep working for a better future in a region that has recently been through tough times.

Volunteers also are hoping that the event will give young people from around the world a chance to meet, share experiences and discuss ways in which young people can make an impact on society.

"We have people coming from places like Brazil, Haiti and the Philippines," said Carolina Vivas, 23, a volunteer who is helping large groups of pilgrims to register for World Youth Day through the event's official internet site, https://panama2019.pa.

"I've never been to those places. But when these people come here, I will be able to see the world through their eyes," said Vivas, who is originally from Venezuela.

Organizers said that, by mid-May, 155,000 pilgrims had registered for World Youth Day. These include about 5,000 young adults from the United States; most pilgrims come from the host nation and from Latin American countries such as Colombia, Argentina and Brazil.

Fr. Romulo Aguilar, director of the local organizing committee, said he is expecting at least 300,000 people to register for the event.

That's a large number for Panama, which has a population of 4million people, and it means that hotel rooms will be scarce -- and quite expensive -- during the event.

Aguilar said thousands of families in Panama City are opening their doors to pilgrims to stay in their homes. Groups can choose that option when registering.

"We have already managed to make enough room for 60,000 pilgrims at family homes," Aguilar said. "Our country has responded with a lot of enthusiasm."

The Panamanian government also will pitch in during World Youth Day by turning several schools in Panama City into shelters for pilgrims. Twenty-five public and private schools are being reviewed as possible shelters.

The government plans to open public hospitals to pilgrims who need medical assistance and organize a task force of 30,000 officers to provide security. Most of the musical performances and religious events will take place along a wide coastal avenue known as the "Cinta Costera," which connects Panama City's historic center with the financial district. Organizers say the central location, in the heart of Panama City, should make it easy for pilgrims to travel to events.

For Panama Archbishop Jose Ulloa Mendieta, though, logistical issues are not the only concern. He told Catholic News Service that as World Youth Day approaches, he has been visiting parishes to pray with young people, but also to speak with church leaders about how the Panamanian church can better serve them.

"We need to prepare for the day after this event is over," Ulloa told CNS. "What type of church will young people whose faith was renewed by this World Youth Day encounter?"

To prepare for the future, the archdiocese has published a manual that helps parish leaders facilitate discussions on 12 issues that matter to young people, including the environment, drugs, social inequalities and the role of women in the church. The manual looks at what church doctrine has to say about these issues.

Ulloa said World Youth Day will be preceded by a special summit for indigenous people and by several prayer events in underserved communities, like the one held at Christ the Redeemer Church in April.

"We want this youth day to reach out to everyone, and especially those who are on the margins of society," Ulloa said.

In Colon, an impoverished port city about an hour from Panama's capital, young parish leaders said they appreciated church efforts to reach out to marginalized people. But they said more needs to be done to draw young people into the church and show them that a better life is possible.

Colon has only 16 streets, but about 25 gangs are fighting for the local drug market. Entire blocks of the city are made up of decaying buildings with rusted paint, some of which have been abandoned by their owners and taken over by illegal tenants.

Yitzhak Gonzales, a local leader for the youth committee, said young people in the poorest parts of Colon grow up seeing their peers getting into drug-dealing outfits. Many feel the church is irrelevant in their lives.

Gonzalez, 26, said one way to fix that is by creating spaces for youths to "reflect on what they want to do with their lives."

He said even if young people do not turn to crime, they go about life mostly thinking about how to make money to support their families. This hurts the chances of anyone seeking a career in the church. The diocese is notoriously short on priests, which means some rural areas only get Mass once every three months.

"There is not much thought given to what God wants from us, or even if we may have a religious vocation," Gonzalez said. "That is why we need more spaces to talk about our vocation and career options."

Neyci Romero, a World Youth Day volunteer at Colon's Jesus Pan de Vida parish, said part of the problem her parish faces is that the faithful have a habit of keeping to themselves. She is hoping World Youth Day will become an excuse for churchgoers to "reach out" to the rest of the community.

"We are going door to door, encouraging people to learn about World Youth Day and get involved," said Romero, 24. "We also have a car with big speakers that we take into the streets to get noticed and make some noise."

The Colon Diocese is aiming to take 3,000 pilgrims to World Youth Day. Some young Catholic leaders in the city have quit their jobs or taken months of leave to help the diocese prepare for the event.

Gonzalez took a one-year leave from his job at the local port. He said he has found the preparations to be rewarding and that he hopes Francis, who is famous for seeking those on the margins, visits Colon while he is in Panama.