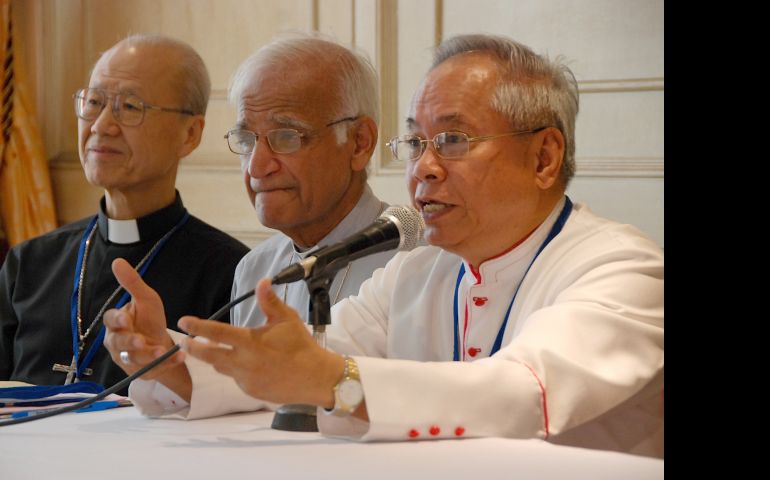 Manila, Philippines — Pope Francis fueled hope for renewed interest in the pastoral theology inspired by the Federation of Asian Bishops' Conferences (FABC) when he announced Sunday in Rome that Archbishop Orlando Quevedo of Cotabato is among new cardinals he will instate next month.

The pope during his weekly Sunday public address at St. Peter Square named Quevedo among 19 bishops he will formally instate as cardinals at a Feb. 22 consistory. Quevedo was FABC secretary general until 2011.

Around Manila, proponents of FABC orientation and thinking on the way church must be structured, developed, and lived in Asia expressed joy in hearing that Quevedo would be joining the body of top church leaders who head pontifical councils and elect popes.

"I am very happy with the news of Quevedo being made a cardinal," said Claretian Fr. Samuel Canilang, director of Institute for Consecrated Life in Asia, a theological school and formation center for priests and other religious serving in Asia.

He told NCR: "many people I talked to this morning were very happy with it also because they see it as the pope sending a very strong signal and significant statement that the Church is now going to take this direction toward the pastoral theology which Quevedo is known for."

Canilang said the bishop's nomination as cardinal "confirms the orientation of our institute, which is pastoral and missionary."

Quevedo is well known for his experience as bishop who is a pastor and for his "involvement in the lives of the people, especially the poor," Canilang said.

The 50-year ministry of Quevedo since he was ordained a priest of the Oblates of Mary Immaculate has taken him to parishes in mission areas served by his order, including Jolo in southwestern Philippines, where 97 percent of the population are Muslim.

He has come face-to-face with violence. In 1985, while serving as bishop of Kidapawan, North Cotabato, anti-communist cult members shot dead Italian Fr. Tulio Favali in his parish in Tulunan.

While leading the archdiocese of Nueva Segovia, Ilocos Sur in what was known then as the "solid north" bailiwick of deposed President Ferdinand Marcos loyalists from 1986 to 1998, Quevedo worked to boost social concern and commitment to the common good through the development of Basic Christian Communities.

Quevedo told NCR he was "totally surprised" and felt humbled to be included in the College of Cardinals. He asked for prayers for the gift he received out of God's "double-edged" love.

"It is a not a gift that provides only happiness and joy. It can cut you," he said. "You have to wear some kind of crown, which is not golden but like a crown of thorns."

This is especially so today, during Francis' papacy, he said. In an earlier interview, he shared with NCR his view of challenges the pope poses to the church in the Philippines and Asia that have stressed the same vision of church and attitudes Francis has been pronouncing.

"To be a church of the poor is for me the most formidable dimension of the renewed vision of church articulated in PCP-II (Second Plenary Council of the Philippines, 1991) because the vision requires a radical change for clergy, religious and laity," Quevedo told NCR.

While he said he believes it is impossible for the church as an institution at its present stage to completely do away with pomp and power, "it must avoid triumphalism and 'holier than thou' attitude."

Quevedo noted that thousands of priests in Asia, where most of the world's population lives and majority of the people are poor, still ride horses or walk to remote villages.

"We cannot go back to the time of the itinerant Jesus, walking to every village to announce the reign of God. But the road of the spirit of poverty and simplicity, as well as the use of institutional riches in the journey for the sake of the poor and the reign of God is open to a disciple church," Quevedo said.

He said he believes this is the way for the church in the Philippines and Asia to go "to be truly authentic and credible disciples of the Lord and heralds of the Gospel."

Quevedo said he was surprised to have been made a cardinal, but said he sees that the move to select someone from the southern Philippines "embodies everything that Pope Francis has been talking about -- dialogue, church of the poor and underdeveloped communities, and peace."

Some 90 priests and 110 nuns serve more than 600,000 Catholics in Cotabato archdiocesan territory, where at least 47 percent of the 1.24 million people are Muslim.

Quevedo understands the hope people place in him to advance the work of the church in Asia and represent their aspirations and thinking in church bodies he will participate in. He said he will draw from his experiences as president of the Catholic Bishops' Conference of the Philippines (CBCP), member of the Pontifical Council for Justice and Peace and other committees and conferences he has joined.

"Prayers, I also need your prayers," he added.

"I've been tied up since (Cardinal Luis) Tagle told me about my appointment at 7:45 p.m. yesterday," Quevedo said, his voice fainter than usual. He said answering text messages and telephone calls from around the Philippines and abroad deprived him of sleep.

Well-wishers included family members, friends in FABC, Thailand, Europe and the United States. In the Philippines, officials of the Moro Islamic Liberation Front negotiating peace with the government, Muslims and Christians in dialogue e-groups, government peace negotiators, former Health Secretary Alfredo Bengson, and President Benigno Aquino's adviser on the peace process, Teresita Deles, were among people who sent him congratulations.

Nuncio to the Philippines Archbishop Giuseppe Pinto called him up Monday morning to advise him on his instatement as cardinal. "I asked him whether I should write my letter of retirement on my 75th birthday on March 11, and he just laughed."

Church law requires bishops to submit their letter of retirement when they reach 75 years old, but bishops remain active until the pope accepts their retirement.

Senior Philippines and FABC theologian Fr. Catalino Arevalo was "overwhelmed with joy" to hear Quevedo was getting the red hat.

The Jesuit priest had worked with the bishop in CBCP and FABC.

"Quevedo is almost always a member of the drafting committee. The committee would very often give him the documents and he would work all night and finish it up in the early morning. That means capacity for reflection, for putting things together," Arevalo said.

Quevedo went to special college in San Jose Seminary in the Philippines from 1954 to 1956 before moving to St. Peter's Novitiate in Mission, Texas. In 1957, he returned to San Jose, where he completed philosophy in 1960. He finished his MA at Oblate College in Washington, D.C.,* before proceeding with post-graduate studies in educational management at the University of Santo Tomas in Manila. In 1977, he completed his course on the theology of religious life at St. Louis University.

Arevalo and confreres involved in their San Jose Seminary for diocesan priests were especially happy to hear of the nomination of another graduate to the College of Cardinals. Cardinals Gaudencio Rosales and Luis Tagle went to the same Jesuit institution.

But the "really significant part" of Quevedo's nomination as cardinal, in Arevalo's view, is that it was done by Francis. "It's a reflection of what Francis has done in the church, and we are hoping and praying in a sense that it is what Quevedo will do to Mindanao," Arevalo said.

To the theologian, Francis' actions represent what FABC has been striving for -- building up the local church. He considers the really key role of the church -- when it comes to actually getting things done from the real needs of the people as resting in the local church.

While acknowledging it is difficult to predict whether FABC initiatives will kick off so that its thinking and spirit will permeate everyday life of the church, Arevalo noted there are new channels for local church participation in decisions and actions that were not authorized before.

He cited the authority Francis' Evangelii Gaudium, gives to episcopal conferences, and openness it affords to dialogue and matters involving various cultures.

Calling the papal document "a real revolution," Arevalo expressed his trust in the competence and determination of Quevedo to use the opportunity to push forward the renewal of the church that FABC has been working for.

Philippines called to lead campaign against the death penalty in Asia

Sartain: Reform of US nuns group an opportunity for dialogue