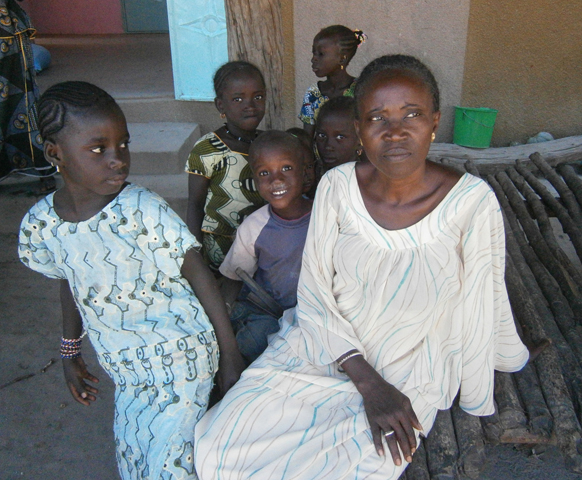 When she heard from the village chief that a 14-year-old girl was being forced to leave school and marry, Senegalese aid worker Constance Mbaye could think of only one thing to do.

"I gave the chief my telephone number and address and told him to tell the girl that if she could escape and make it to the city, I would take care of her," said Mbaye, a Catholic who once thought she wanted to be a nun.

She said the girl, Idiatou, fled her tiny village the same evening, walked five miles in the dark through forests and fields to the nearest road, then hitched a ride to Tambacounda, where she showed up in front of Mbaye's house the next morning.

The event in 2007 marked the beginning of Femmes Entr'Aide, the charity Mbaye founded to help Idiatou and others like her study amid great obstacles in rural Senegal, where a 2012 UNESCO report shows 94 percent of women ages 15-24 have less than a lower secondary education.

"They get married early, or their parents don't have the means to pay for school, or it is far and they can't get there," Mbaye told Catholic News Service in mid-December.

"I grew up in the (Catholic) church and learned to help others when I can," said Mbaye. "I consider that my efforts to educate young women are part of what Jesus meant when he told us to love each other."

This lack of educated young women in Senegal contributes to the country's lack of development, said Mbaye, who has worked for nearly 30 years on various aid projects across this West African nation of 13 million people.

"Yes, we can teach older illiterate women to read and write, but often they don't have the time and are too busy with chores to go to classes. So I understood long ago that we have to start early and at the basic level ... so it is imperative to get families to send their girls to school," Mbaye said.

After Idiatou showed up at her house, Mbaye said she sought and received money from French and American donors to start her charity and build a hostel in Tambacounda for young women from Senegal's rural villages. In the countryside, a blend of poverty, illiteracy, traditions and absence of secondary schools keeps girls homebound to work and wed -- sometimes at as early as age 11 -- despite Senegalese law that states the minimum marriage age is 20 for males and 16 for females.

"One time there was an 11-year-old girl that was engaged to be married," Mbaye recalled, "and I complained to the village chief, who told me, 'You want every girl in the village to go to school? Take half, but leave half.'"

Mbaye said the safe and free-of-charge hostel encourages parents to let their young women leave their villages to study in Tambacounda's public schools, as does the stipend that covers school materials and daily meals.

Since opening its doors in 2008, Femmes Entr'Aide -- French for "Women Aiding Each Other" -- has helped 552 young women attend classes beyond the elementary level, according to the charity's records.

Mbaye spoke of a shortage of funds, noting that a recently fired employee was in jail for swindling thousands in hostel funds.

"We have had to cut back on cooks and cleaners, and the amount of the stipend has decreased. We are looking at ways of making the hostel more sustainable," she said.

When not at school or studying, the young women take turns cooking and cleaning, and there are plans to build a reservoir to save on water bills, as well as plans for a boutique to sell soap the women will make to help defray living costs.

Mbaye said that of the 131 students now living in the hostel, 35 are young men residing in a separate wing, and 59 male students have received assistance from her organization since 2010.

"Villagers get afraid (of educating their young women) and ask, 'If we send the girls what will happen to the boys? Who will they find to marry?' I say let's send everyone to school," Mbaye said.

She said her organization recently used funding from the Catholic charity Caritas in the Diocese of St. Polten, Austria, to construct classrooms for both young men and women in Thies, her hometown.

She said her paying job as a coordinator for a government rural energy project means she is often in the field in remote parts of the country, giving her vital access to village parents and the opportunity to advocate for their children's education.

"I don't tell (parents) they are wrong, this is not my approach. I explain to them the negative consequences of not sending their young to school and the effects this will have in the future" such as increased illiteracy and poverty, Mbaye said.

Idiatou, the catalyst behind Femmes Entr'Aide, is now 18. At the time of her escape, Mbaye insisted on meeting the girl's illiterate parents to convince them they'd be better off with a daughter who was educated. The parents consented, but married Idiatou to a neighbor's son on the second day of her first school break, when she was home for a visit.

"Then I went back to the village and convinced the husband to allow his new wife to continue her studies in Tambacounda," said Mbaye. "He was immigrating ... and I explained how useful it would be if his wife was educated ... in order to look after their future children's health and read important notices" while he was away, Mbaye explained.

Mbaye said that, soon after the wedding, the husband left for Spain and has not returned.

Idiatou, in the meantime, has finished high school in Tambacounda and is now in her second year of studies at a nursing college, Mbaye added.