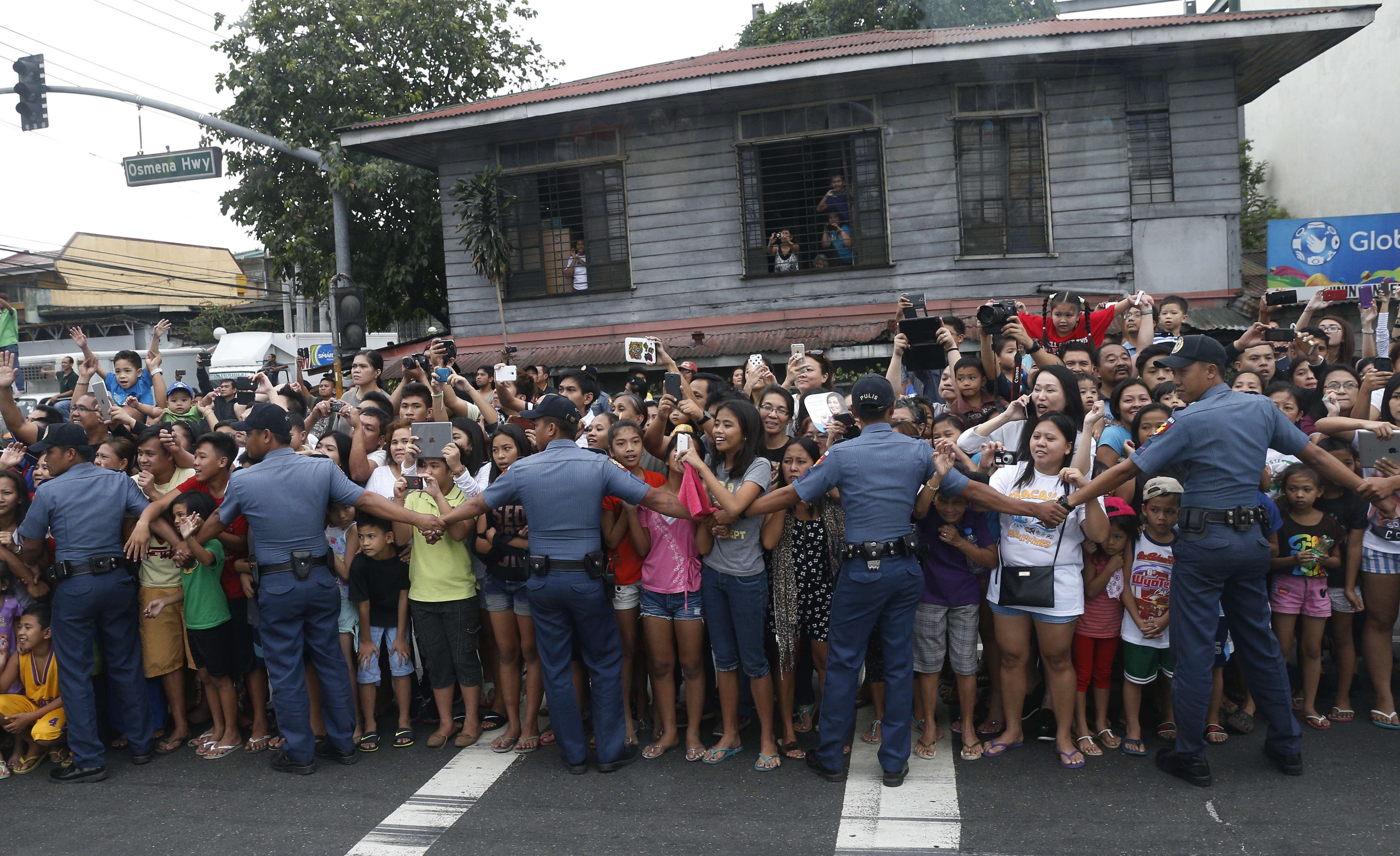 Police hold back the crowd lining the motorcade route as Pope Francis arrives back in Manila after celebrating a Mass adjacent to the airport in Tacloban, Philippines, Jan. 17. (CNS/Paul Haring)

A botched plan by hurricane survivors to hand over a compilation of messages and a shepherd’s staff made for Pope Francis' visit to Tacloban, did not dampen their resolve to continue leading the rehabilitation of their communities where many of the deaths occurred in Typhoon Haiyan Nov. 8, 2013.

"Pope Francis' visit was very fast and security was tight so the people decided to just find another way to get the report and the staff to (Francis) later on, maybe through the nuncio," Franciscan Fr. Robert Reyes told NCR on the phone from Tacloban.

Braving tropical storm Amang, Francis left Manila at 7:30 a.m. Saturday, earlier than scheduled. His plane touched down at Tacloban airport, but his eight-hour visit was cut down to three hours to ensure a safe flight back to Manila.

Francis went to all of the scheduled activities, but skipped some of his speeches so he could be back at the airport by noon. The pope joined survivors for lunch, blessed Pope Francis Center for the Poor in Palo, and spent a few minutes with clergy and religious gathered there.

Since Jan. 12, Reyes helped the organization Urban Poor Associates prepare 10 communities in Tacloban for the papal visit. Residents gathered to pray, reflect and share about Francis, writing down what they wanted to share with the pope.

Urban Poor Associates staffer Celia Santos, who is collating people's messages, shared some of them: "Thank you, Pope Francis for coming to visit us and for praying with us," many wrote. "Thank you for working to make the church open to the poor," others wrote.

She told NCR, "We are very surprised that they are not asking anything material, but just asking for the pope to continually remember them and pray for them." Through a contact of Reyes, the communities commissioned a northern Philippines carver to craft a shepherd's staff from bamboo with the image of St. Francis on top of it.

Santos explained Urban Poor Associates’ work in these communities, including Barangay 89 and Barangay 90, or small communities, where some 400 people died in Typhoon Haiyan. At least 6,000 deaths were recorded across central Philippines, and scores of others remain missing.

"We are organizing them into several units similar to homeowners associations,” Santos said. “We organize advocacy activities on issue of climate and housing rights. This time the people want to be able to express as close as they can and as much as they can to the pope, and we try to help link them.”

After Typhoon Haiyan struck, Urban Poor Associates went to Tacloban to survey the ruin. Its leaders and workers asked to talk to leaders of communities and found there were no people's organizations at all, not even neighborhood organizations.

"In those areas there were no recognized leaders meaning they had no way of expressing group action,” said Urban Poor Associates executive director Denis Murphy. “Maybe if one person had a complaint he might go to the Barangay captain (community official) and that would be the end of it.”

This is why the principle of "build back better" applied by governments and international aid organizations "is not a very good goal," Murphy said. "We add, we want to build back better, but we include in better the initial roots of democracy and people's power."

He explained why "it's useless" to leave the ravaged communities without their own sense of organized power, solidarity, know-how to do things. "They'll just slip back ... when all the food is gone and whatever resources they've gotten are put into place and there's nothing left."

This time, residents were called to town-hall type meetings. They shared their troubles with tent-living. They told community organizers since the tents were resting on wet sand, when the rains came, the water rose into the living area and the beddings.

"The women told us no one could sleep," Murphy recalled.

The organizers asked the people what they wanted to do. Residents threw out suggestions. Finally, they agreed they had to put something on the ground, suggesting rocks, and hollow blocks until someone suggested plywood. Finally the groups decided to use marine plywood because it is thicker and waterproof.

Urban Poor Associates gathered the people again to develop a systematic way to implement the project. They formed committees: one to price the plywood, another to go around each house and find out how many pieces of plywood it needed, and another to take some kind of census of who lived in each tent.

Families who received plywood had them laid out in just a few days. "Only maybe one or two families sold," Murphy said.

Meetings continued to evaluate the conduct of the activity and how to improve the process.

"So that's a good opener, it's quick, very concrete, and it affects everybody. Groups don't do that. They manage the whole thing and they manage the people. If they see that the people had put it up that's good that's the end," Murphy said.

Today only a few tents are left in Barangay 89 and Barangay 90. In consultation with the people, a feeding program is being implemented along with Bible classes. They are training to dialogue with local government officials and have been allowed to build transitional houses within the 40-meter no-dwell danger zone, if they find a landowner that will allow them.

"We also tackle laws with adults, such as what to do if someone comes to demolish their homes," said Murphy, an American who has worked for decades in poorest communities in the country. He said there is much work left to do.

He said people have expressed gratitude to international agencies like Christian Aid and Oxfam who support their projects. Religious, like Reyes, have also volunteered to help with spiritual growth, such as sessions on Francis that focus on sections of his apostolic exhortation translated to Filipino language.