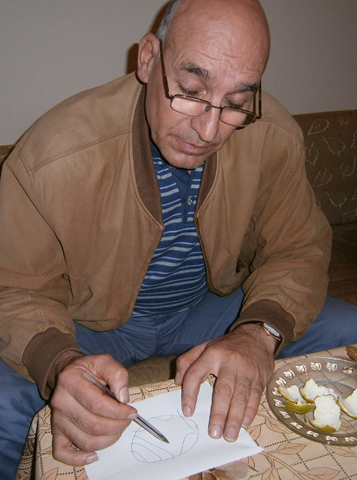 Michel George Sarkisiyan draws a map Nov. 15 at his apartment in Istanbul, Turkey, of the Syrian city of Aleppo, which he was forced to flee in October because of the civil war in his homeland. He and his family have run out of money and are concerned for their future in a foreign country. (CNS/James Martone)

Michel George Sarkisiyan is behind on the rent for the one-bedroom apartment he shares with his wife and 8-year-old daughter, Magdalena.

That's just one of the hardships the small family has faced since fleeing to Istanbul from their home in Aleppo, Syria, 554 miles away.

They can't afford to pay the gas bill. So when not taking long walks, they sit in the cold of advancing winter, and use only enough light at night to be able help Magdalena do her homework. The little money they have left will soon be spent on food and electricity, and their tourist visas are running out, which will make them illegal residents of Turkey.

"We are the lucky ones, we have a roof over our heads and an Armenian school has allowed our daughter to attend. But I don't know what we will do at the end of the month," said Sarkisiyan, who was once a wealthy factory owner in Aleppo.

He refuses to take his family to one of the refugee camps opened by the Turkish government for the tens of thousands of Syrians escaping civil war at home.

"If (Turkish) police tell me to go there, I won't," he told Catholic News Service Nov. 15 in his chilly Istanbul apartment, as Magdalena and his wife, who asked not to be named, watched.

Turkey has committed to providing the flood of refugees with shelter, food, medication and education in the 14 camps located along the country's 560-mile frontier with Syria, where the government and its supporters have been locked in a battle with rebel forces for the last 20 months.

The United Nations High Commissioner for Refugees reports that more than 117,000 Syrians reside in the border camps and that another 70,000 are living in Turkish urban areas near the camps.

UNHCR spokesman Metin Corbatir said another 8,000 to 9,000 refugees are registered at the camps but have since moved out. An unknown number of refugees have not registered with the refugee agency and reside in Istanbul or other communities, he said.

"Some entered legally or illegally and moved to cities either with visas or without visas and they stayed until their visa expired," Corbatir told CNS.

For these there is little relief, say aid groups, because the Turkish government considers all Syrians fleeing war as "guests" with rights to aid at the border camps. But the Turks do not consider the Syrians as full-fledged refugees who, under international law, are entitled to aid and relocation to other parts of Turkey and eventually abroad.

"We don't have the right to register them," Msgr. Francois Yakan said of the few Syrians who make it to the charity known as Kader that he runs in Istanbul. The organization guides legally recognized refugees through the paper work necessary to obtain resettlement abroad.

"We tell (the Syrians) they are better off in the camps for the time being than elsewhere," he said. "At least they are provided for there. There are times when some come to us penniless, and we give them the money they need to get back (to the camps)," explained Yakan, vicar of the Chaldean Patriarchate in Turkey.

Such legal hurdles have made Syrians living outside of the camps reluctant to go public. Of five Syrian refugees in Istanbul contacted by Catholic News Service, only Sarkisiyan agreed to an interview. He put the number of Syrians fleeing to Istanbul in the hundreds, and said most of them feared repercussions from both Turkey and Syria if they made their presence known because they would be sent to the camps or "eliminated" if they returned to Syria.

"They are afraid. When I hear families speaking Syrian Arabic, I try to help them find apartments, but everything is too expensive and they have no money," said Sarkisiyan, a member of Syria's Armenian minority.

He said he traveled last month by car, bus and foot the 100 or so miles from his city to the Syrian border. Along the way he reported seeing "entire families living under trees, cooking leaves for their kids to eat and asking passers-by for clothing."

"I could not believe my eyes," added Sarkisiyan, 53, who said that returning with his family to Syria was no longer an option.

"I want to work here in Turkey ... or travel to Australia," he said. "Syria for me is over. (Government) planes bombed my chair factory. We also no longer have a house there because the area we lived in has been completely destroyed by shelling."