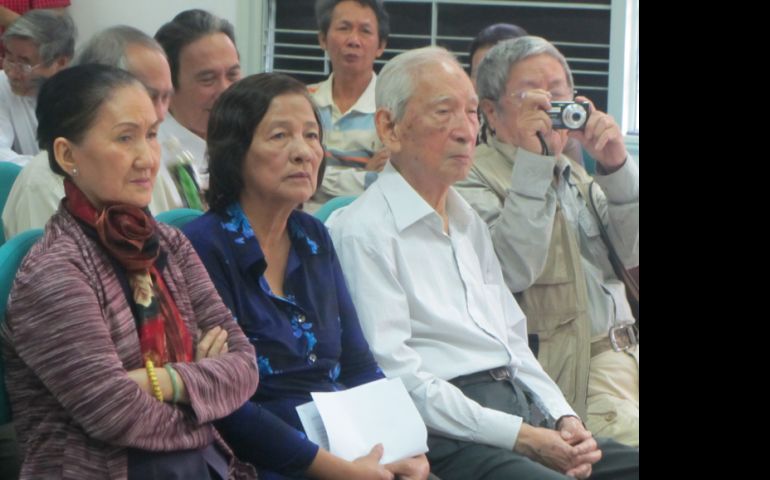 Ho Chi Minh City, Vietnam — After 40 years of near-silence, Catholics and retired government officials have expressed gratitude to former South Vietnam’s soldiers who died in the war against the Chinese invasion of the Paracel Islands.

“Today we gather together here to commemorate, express our deep gratitude to and pray for soldiers who sacrificed their lives to defend our nation in the sea war against the Chinese invasion of the Paracel Islands in 1974,” said Fr. Joseph Maria Le Quoc Thang, secretary general of the Episcopal Commission for Justice and Peace.

About 70 people, including retired government officials, attended a special celebration to commemorate the 74 soldiers who had died in that war. A dozen plainclothes officials were present and took photos and video of the ceremony, which was held by the Paul Nguyen Van Binh Club at the Dominican-run pastoral center in Ho Chi Minh City on last Saturday.

The club, named after a deceased Ho Chi Minh City archbishop who had worked with the communists in a spirit of dialogue, aims at increasing mutual understanding among the local church and government. Club members – priests, religious, and Catholic intellectuals – study local church issues and discuss things like culture, the economy, education, history, laws, politics and religion with experts from state-run centers.

Fr. Thang, who concelebrated the Mass with two other priests, noted that the celebration aimed not at arousing resentment against the Chinese, but at breeding patriotism among people who have to continue to defend and develop the whole nation that their ancestors died for.

Dominican Fr. Joseph Nguyen Trong Vien, who presided at the Mass, told NCR, “I would like to acknowledge my debt to soldiers who fell down to defend these islands, and my debt to their wives.” He also admitted that the local church had done few things to support them.

This is the first time the club has held a Mass to pray for the martyrs and console their relatives, though in 2011, club members and retired government officials did offer incense to remember the martyrs.

Sinh, 65, told NCR, “We are happy that Catholics prayed for our husbands. The celebration is the greatest consolation to us for decades.” She said she had not received any support or consolation from the government.

The mother of two said her children are married but live a meager living. Because of a planned road building project, government authorities had her move two years ago but have not compensated her with an apartment.

“I stay at my sister’s house that is too small for me to set up an altar to my husband,” she said.

Thanh, 67, said that through the celebration she felt proud of her husband, who died while she was pregnant with her second child. She said she worked hard to raise her children.

Noting that just one year after the Paris Peace Accords had been signed 1973 to end the Vietnam War and make the United States withdraw its troops from South Vietnam, Dau said that from Jan. 17 to 20, 1974, China deployed warships and invaded the Paracel Islands, taking some of them from the US-backed South Vietnam soldiers’ control. The brief but bloody naval battle left 74 of South Vietnam’s soldiers dead, while 48 others, including an American whose name was Gerald Kosh, were captured as prisoners of war.

Dau, who is the club’s vice chairman, said then South Vietnam Foreign Minister Vuong Van Bac sent a message to nations that it had diplomatic ties with and to the United Nations, criticizing China’s illegal invasion of the islands:

“The Paracel and Spratly archipelagos are part of the Republic of Vietnam,” he wrote. “Our nation’s sovereignty over those islands is based on our legitimate historical, geographic and legal materials, real administration and ownership as well. They are undeniable facts.”

In a decisive move in the battle for sovereignty over the disputed islands, in 2012 China established Sansha City its local administrative center, on Woody Island in the Paracels.

Vietnam has never relinquished its ownership of the Paracel Islands, however, and continues to keep military bases and other facilities on some of the Spratly Islands.

On Jan. 9, Vietnam rejected as "illegal and invalid" China's new regulation that requires foreign vessels entering China-claimed waters in the area to obtain approval before fishing there. Under the new regulation that came into effect on Jan. 1, violators could face severe punishments, including having their catch or boats confiscated or their crews prosecuted under Chinese law.

Vietnam Foreign Ministry spokesman Luong Thanh Nghi said China's move "further complicates the situation in the East Sea," as the disputed waters are called in Vietnam, and he urged its northern neighbor to "rectify its wrongdoing and make practical contributions to maintain peace and stability in the region."

Nghi said the Chinese move seriously violates Vietnam's sovereignty over the Spratly and Paracel islands in the South China Sea and its sovereign rights and jurisdiction under the 1982 U.N. Convention on the Law of the Sea.

This year, state-run media for the first time has published reports on the former South Vietnam’s battle against Chinese invasion of the Paracel Islands.

Zahra: Economic system must be based on principles of freedom, dignity

Religion and the Democratic Party: It's complicated