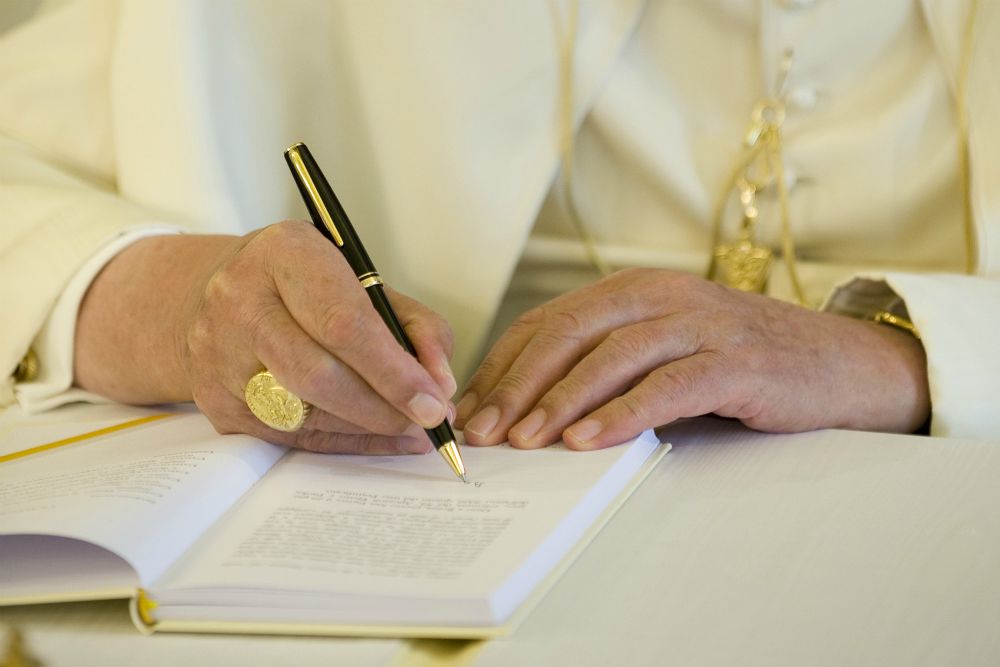 Pope Benedict XVI signs a copy of his encyclical, "Caritas in Veritate" ("Charity in Truth"), at the Vatican July 6, 2009, which addresses the global economic crisis. (CNS/L'Osservatore Romano/Catholic Press Photo)

The whole world now knows that Pope Francis is more or less fed up with some of his critics. His comment about it being an "honor" to be attacked by conservative Catholics in the U.S. made that clear for all to see. Francis had just been presented with a copy of a new book by French author Nicolas Seneze, which catalogues conservative Catholic efforts, largely American, to influence this pope or to limit his influence and undermine his efforts. The fallout from the pope's comment is kind of fun to watch. Last week, EWTN host Raymond Arroyo began his hour-long show with an eight minute "commentary" that pronounced the pope's comment "troubling." I actually found the pope's candor refreshing.

Arroyo referred to a "string of lazy articles." He went on: "This is tired, and, frankly, a fact-free narrative." He complained that it had been peddled mostly by "Europeans and progressive Americans" and claimed these critics "make the mistake of casting orthodox Catholics in America as right-wingers, players in a political plot to undo the agenda of Francis." He countered this portrayal, saying, "The truth is much more simple. American Catholics actually believe what the church has always taught, and they're loud enough and have big enough platforms to broadcast that belief." Arroyo insisted that "all traditional Catholics have done is ask questions."

Arroyo unwittingly confirmed the thesis he was trying to debunk when he concluded: "The truth is this is all a craven attempt to demonize and purge voices form the church who dare to question the radical changes that are under way and the brutal tactics used to enact them." Radical changes? Brutal tactics?

To prove his claim to editorial balance, Arroyo played a tape of him of the night a year ago when he reported about Archbishop Carlo Maria Viganò in which he said, "I am a little squeamish about a pope resigning again." Huh? Had a former nuncio publicly demand that Pope Benedict XVI resign? Why add the word "again"? He did, to his credit, acknowledge there had been criticism of Viganò, but one year later, on a show just two weeks ago, Arroyo and his papal posse, Robert Royal and Fr. Gerald Murray, spent more than half the show defending Viganò and arguing that most of his claims had been proven true, when in fact, most of them had been proven false.

Me thinks the pope touched a nerve. Arroyo's rant sounded like nothing so much as the wild excuses a child makes when caught pilfering the cookie jar. To be clear, if I were in his shoes, I would be upset also. I would be upset if I thought my pals owned the church and someone had come along and taken it away from us.

There is, indeed, a cabal among right-wing Catholics to undermine or minimize this pope and his teachings, and you could discover it merely by watching EWTN or reading its auxiliary media outlets. No one would have Cardinal Raymond Burke or German Cardinal Gerhard Müller on their show as an authoritative guest unless such undermining was the goal. No one would have Phil Lawler, who was the first guest on Arroyo's show last week, on their show as an expert unless undermining the pope was the objective. The two men enjoyed themselves complaining about all the damage they think Francis is doing to the church.

I wish to send Arroyo and other conservative Catholics an invitation, one that I received a long time ago and from which I derived enormous benefit. During the more conservative pontificates of John Paul II and Benedict XVI, friends encouraged me to read their writings with an open mind, not to dismiss them because they were so conservative. Of course, in the area of Catholic social teaching, there has been enormous continuity, not only across the last three pontificates but stretching all the way back to Pope Leo XIII. But, when I read some of the writings of Cardinal Joseph Ratzinger, from his early work Introduction to Christianity to the trilogy on Jesus of Nazareth that he wrote while pope, I not only learned a great deal, I had my faith strengthened by the insights he discerned. Here is the column I wrote the day after his resignation. I was not yet a writer when Pope John Paul II issued Novo Millennio Ineunte, but I remember thinking it was a magnificent document that made me stretch in ways I would not have done if I had simply stuck to my more liberal Catholic texts.

So, instead of painting Francis in such a harsh and negative light, rather than poking fun at synods, or highlighting and even championing a score-settling text like Viganò's "testimony," I invite conservative Catholics to come to Francis and his teachings with an open heart and an open mind. I hope they might find, as I did with his conservative predecessors, an opportunity to stretch their faith, which always leads to an expansion and a deepening of that faith as well. It is a big church, and there is room for everybody. The alternative is the emergence of a sectarian, para-schismatic church in the United States. And, if a full-blown schism were to occur, its source would largely be found on EWTN.