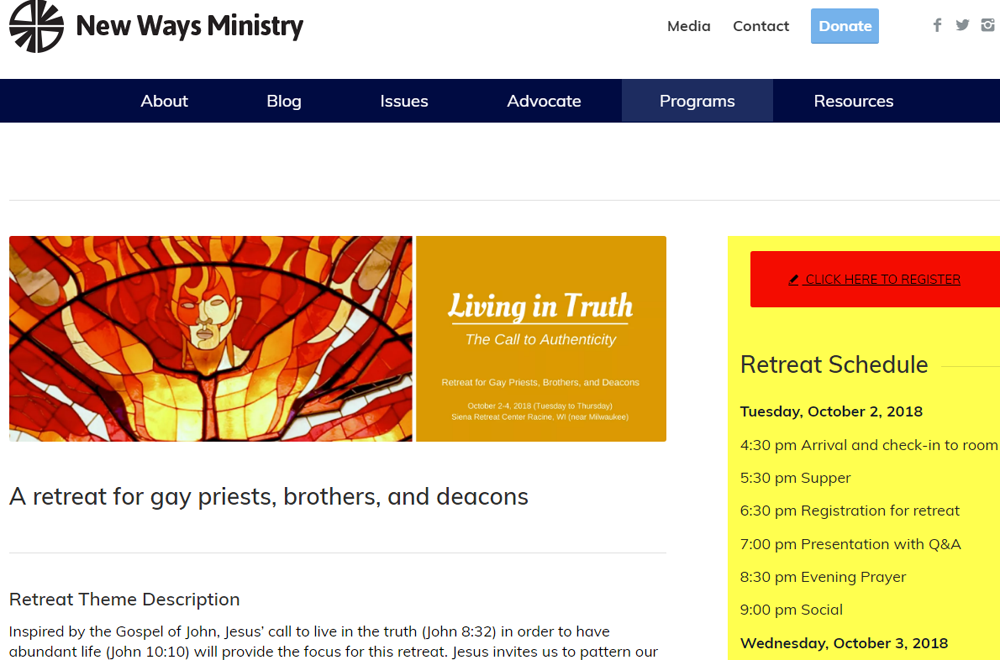 As the facilitator of this retreat, I offer these observations in response to concerns that have been raised about it:

1. Permission for a retreat?

This year I marked my 35th anniversary as a priest. Over the years, I have led retreats for all kinds of groups, including Christian women, Boy Scouts, confirmation candidates, seminarians, pastoral ministers, young adults, teachers and principals, parish councils, Black Catholics, Latino Catholics, Engaged Encounter, women religious, permanent deacons, campus ministry groups, those who have left the church and seek to return, and even Catholic cat lovers (!) Never was there a suggestion that advance notification was needed to act as a spiritual guide for the people of God.

Thus, it would never occur to me that a unique communication or permission would be expected in order to lead priests, deacons and brothers in prayer. These are my brothers, men with whom I share bonds of ministry, sacrament and life commitment. Frankly, I'm amazed, and sad, that there is such deep concern over a retreat for people who have pledged their lives in service to the church.

Some insinuate that there is something "clandestine" about this retreat gathering. To the contrary, this event has been publicized for over a year both in print and on the internet. The retreat's venue and theme — "Living in Truth: The Call to Authenticity" — have not been secret or hidden. Nor is there anything covert or nefarious about the retreat's content or activities. Indeed, I would warmly welcome my archbishop if he would want to attend and pray with this group.

New Ways Ministry has sponsored this retreat for priests, brothers and deacons for some years. Yes, this organization has questioned the adequacy of official teaching and policies on same-sex relationships. But to say that invalidates this retreat is a leap in logic, to say the least. It implies that any association with a group implies endorsement of all its practices.

More to the point: I myself — not New Ways Ministry — wrote the retreat's description in the promotional brochure. It reads: "Inspired by the Gospel of John, Jesus' call to live the truth (John 8:32) in order to have abundant life (John 10:10) will provide the focus for this retreat. Jesus invites us to pattern our ministry and our sexuality according to his embrace of the truth. Embracing God's truth, discovered in our deepest selves, both challenges and empowers us to live more authentically in every dimension of our lives."

I cannot see how anyone can read this and conclude that this retreat is "not in line with church teaching." Such an assertion, even before it happens, is at best unfounded — and perhaps even a sin of rash judgement.

This is the core issue. If this was a retreat for "senior" priests, "young" brothers, "retired" deacons or "alcoholic" priests, there would be no concern or consternation. The word "gay," with the fears and prejudices it conjures in the minds of some, is what makes this gathering of God's servants problematic.

The insinuation is that gays and lesbians, especially gay men, are so sexually undisciplined that any gathering becomes morally suspect and spiritually dangerous. To say this theologically, two or more gay people in a room equals an occasion of sin.

In such a mentality, a gay cleric or vowed religious becomes something "other" — a walking contradiction — tainted, deviant, and "less than" his straight brothers.

(This explains the constant efforts to blame the scourge of sexual abuse on gay priests — a gross slander that also ignores the horrors inflicted upon women victim-survivors.)

Stated bluntly, gay clergy and religious are an embarrassment for some in the church. "Gay" forces an uncomfortable public acknowledgment of what many already know, namely, that there are same-sex oriented priests, brothers, deacons — and bishops — who not only are members of the church but also serve it honorably as spiritual leaders.

This is precisely why this retreat is a felt need. Gay clerics and vowed religious have unique joys and challenges that arise because they strive to serve a church where too many view their presence with suspicion, alarm and even hostility and disdain.

Thus, the need to gather and prayerfully encounter the God who loves them even as they answer the call to serve a faith community that too often denigrates their sexuality, a "fundamental component of their personality" (Catholic Congregation for Education, 1983).

5. 'A dominant marker of identity' best lived in silence?

The Milwaukee archbishop's communication quotes a brother priest who expresses the belief that:

"The best pastoral experience of the Church, as well as our consistent teachings about who we are as persons, point to the reality that it is never healthy or holy to act out on same-sex desires, even in the realm of the merely emotional. Much healthier and holier is the attitude that our sexual desires are simply one facet of who we are as persons, rather than making them our dominant marker of identity with a term such as 'gay.' "

There are many problems with this statement. First, church teachings actually encourage gay men and lesbian women to form affectionate and nurturing friendships. To maintain that such affection must lack "emotion" in order to be holy or healthy is unrealistic and inhuman.

More to the point: The statement that priests who use the word "gay" are making their sexual desires "a dominant marker of identity" is a gratuitous assertion. Pope Francis, in perhaps his most famous statement, used the word "gay" while speaking of someone whom he described as possessing a desire to "search for the Lord." The Holy Father recognizes that a priest can be gay and have an innermost desire to be conformed to the person of Christ. In a word, to be holy. Identifying as "gay," then, does not mean that "sexual desires" must become a man's defining or core identity.

But the fundamental issue with this statement is that it conveys a conviction that gay persons — and especially priests — should live hidden lives where their sexuality is veiled from public view and cloaked in silence. And that such a life is the best path to health and holiness. I strongly disagree.

In fact, I argue that a toxic culture of secrecy is a major contributor to the waves of sexual scandal that have plagued our church and devastated the lives of untold thousands. Silence feeds shame; and these breed sexual immaturity, abusive pathology and systemic dishonesty.

In this time of crisis, the laity don't want to hear only about a "joyful witness to celibacy," as this priest suggests. (Note how this summons ignores the existence of married priests). They want church leaders who are spiritually healthy, psychologically mature, and sexually honest.

Above all, they want bishops of integrity who prioritize the welfare of the faithful over the reputation of the institution.

I believe that this retreat, which prayerfully considers the joys and challenges of "living in truth and authenticity," is one way of creating a "healthier and holier" climate in our church and a safer environment for all of God's people.

In conclusion, it is sad that a group of people who want to pray arouses such concern and even hysteria. Especially a prayerful assembly of ministers who serve Christ's church.

I am honored to lead this retreat. I believe it will be an occasion of grace, not only for those who attend, but also for the church we serve and love.

[Fr. Bryan Massingale is a theology professor at Fordham University in New York. He is the author of Racial Justice and the Catholic Church.]