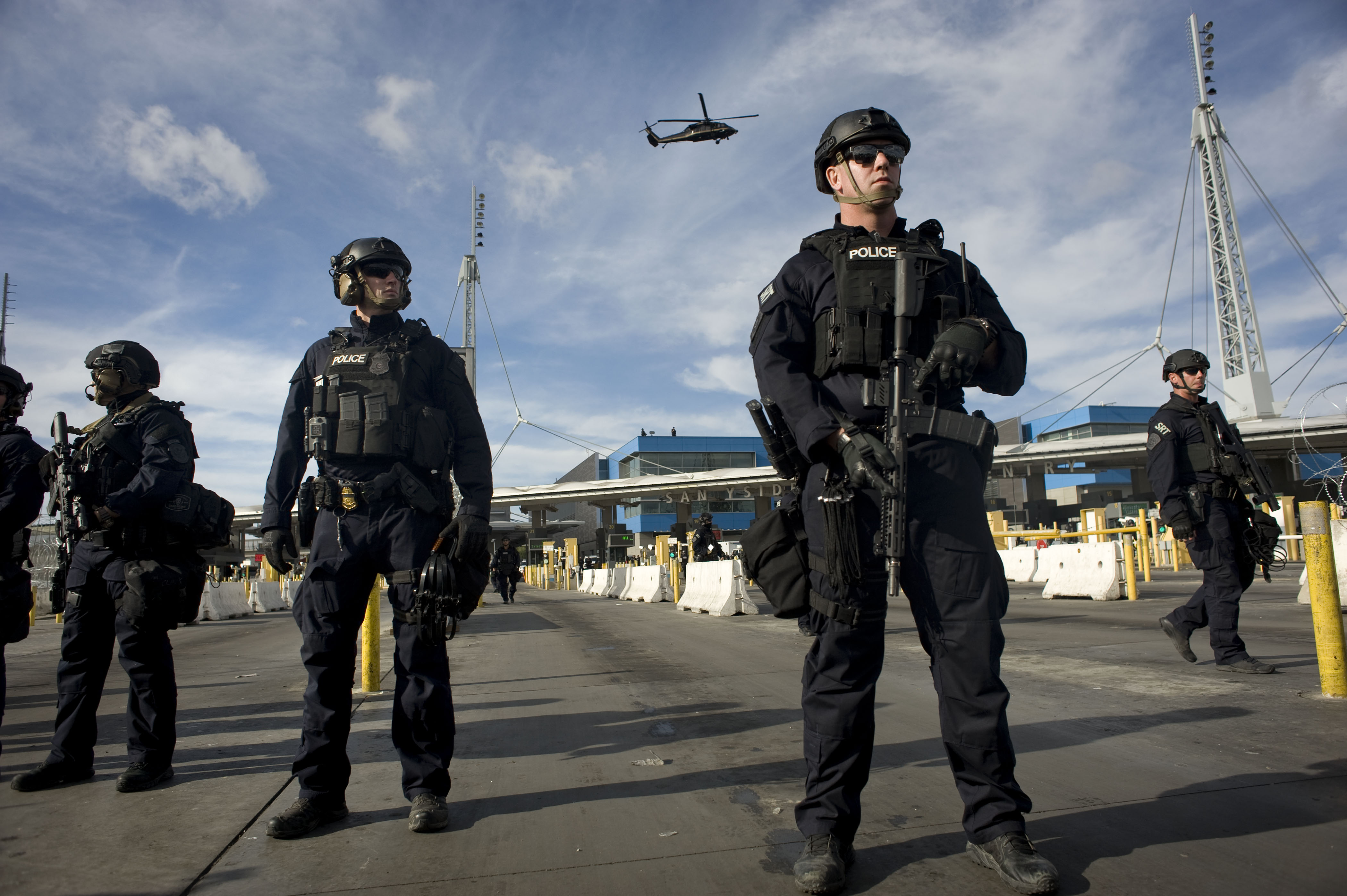 U.S. Customs and Border Protection officers stand in the vehicle lanes during a show of force and exercise to secure the San Ysidro Port of Entry Nov. 22 in San Diego. Several hundred officers as well as military personnel were seen participating in the exercise, which had the border crossing closed for about 30 minutes. The show of force and exercise was in response to the presence of a large caravan of mainly Honduran migrants that recently arrived in neighboring Tijuana, Mexico. (CNS photo/David Maung)

I was traditioned into the legacy of St. Óscar Arnulfo Romero y Galdámez Romero by the Puerto Rican actor Raúl Julia. His haunting interpretation of the martyred archbishop in the 1989 film Romero was a staple of the ethics course I taught for almost a decade at an all-boys Catholic high school. To this day, Julia ordering the Salvadoran military and police to stop the repression echoes in my mind, so much so that when I finally heard a recording of Romero himself uttering these words I thought it had to be a mistake. Where was the fury and fire? The film's poetic license was necessary to capture in a few minutes the essence of almost three years of weekly 80-90 minute Sunday homilies, many of them more than twenty single-spaced typed pages long, exhorting, imploring and begging all of his Salvadoran people to turn away from violence. These famous words near the end of Romero's last Sunday homily, the day before his assassination, are followed by 30 seconds of applause in the Cathedral:

The context of this order emanating from a higher authority was, in part, a response to a letter sent to Romero earlier in the year by soldiers who were seeking his support in publicizing their plight. In a January 1980 homily, the archbishop read aloud their words outlining their 10 recommendations to improve conditions for the troops. Half of their list addressed such concerns as better food and clothing, fair pay, compensated lodging and enhanced life insurance. The other requests, interspersed throughout the list, dealt with violence. They called for a cessation of the beatings they experienced, of the commands given to repress their own people, of combat without reasons. They outed their commanders and officials as responsible for "toda la opresión hecha al pueblo." Faced with the prospect of fratricide, of following orders to oppress their own people, these soldiers had sought counsel from their Archbishop through their letter. In the last Sunday homily of his life, Romero replied to his people in the armed forces and the police with a clarity rooted in Christian tradition:

Our shameful times are in need of such a reminder as ICE, border patrol and agents of the Department of Homeland Security are enforcing policies and practices that separate children from their parents and families, that drive asylum seekers to even more desperate measures, that allow children to suffer and to die from treatable illnesses. There is no federal law mandating the sacrifice of one's child for the act of migrating without the proper documents. This policy change, effected by the attorney general of the United States in Spring 2018 to deter migration, criminalized such entries into the country resulting in forced separations, detentions, traumatized families and lost children. Government-abetted child neglect and abuse is a scandal, not a laudable national security plan.

Where are the calls for acts of conscience from our ecclesial leaders? If, as Augustine posited, as Aquinas affirmed, as Martin Luther King, Jr. and Óscar Romero insisted, an unjust law is no law at all (lex iniusta non est lex) then what about an unjust policy? In 1969, the U.S. bishops released Human Life in Our Day, their pastoral letter on the sanctity of life and conscience, remembered today in limited excerpts primarily for passages on abortion and contraception. Conveniently overlooked is the bishops' controversial position allowing for the possibility of selective conscientious objection, "without fear of imprisonment or loss of citizenship" for those who refuse to serve in "wars which they consider unjust or in branches of service (e.g., the strategic nuclear forces) which would subject them to the performance of actions contrary to deeply held moral convictions about indiscriminate killing." (152) The bishops acknowledged "frequently conscientious dissent reflects the influence of the principles which inform modern papal teaching, the Pastoral Constitution, and a classical tradition of moral doctrine in the Church." (145)

What about the church's teachings on migration? Are they not capable of informing "conscientious dissent" on matters of policies and practices regarding the treatment of migrants and refugees? Where are the words of the hierarchy to our Catholic brothers and sisters trying to sort out their responsibilities as people of faith employed in law and border enforcement? Where is the church-provided counseling to support local and federal government employees who refuse to participate in immigrant roundups, deportations, family separations and the incarceration of children? After all, Gaudium et Spes identifies both arbitrary imprisonment and deportation as insults to human dignity. (27) How difficult and stressful must it be for those who are immigrants or the children of immigrants, particularly Latin@s, to police the southern border of the U.S. and enforce policies that pit them against their own kin? Who informs the consciences of contract employees who themselves are loving parents yet dispassionately guard crying children in cages in conditions they would not tolerate for their own kids?

As a pastor and as a Salvadoran citizen, Romero called on more than the military to reclaim and act according to their individual and collective consciences in order to stop the repression. Through his homilies he called out every sector of Salvadoran society in the name of the gospel to "walk away from the paths of violence and to seek, with greater vigor, rational solutions through dialogue." In the Lenten Sunday homily, two weeks before his assassination, he summoned the oligarchy to collaborate with the people and to "yield with pleasure that which will bring greater peace to people and peace to your own consciences" namely the land they possessed, the rightful patrimony of the people. He beckoned those government officials who felt impotent in the face of corruption to either exercise their power "or confess that you cannot command and unmask those who are doing the country great harm under your protection." He reproached those in power who colluded to prevent reform to cease their obstructing, their fomenting of repression, their betrayal.  He appealed to guerrilla groups to abandon violence as a means to a just end. Born in the shedding of blood, the fruits of such violence would not last. He urged popular organizations to "be reasonable political forces that act on behalf of the common good of the people" and seek change through dialogue and peaceful resolution. Romero advocated solidarity with those who were poor yet acknowledged the power of campesinos to evangelize others, to act on their own behalf, to contribute to the common good and to participate in the creation of a just nation.

As archbishop, Romero was pastor of the vulnerable, the indifferent, the collaborators, the perpetrators and those whose fortunes benefitted from the violence. For three years, through his radio broadcast Sunday Mass homilies, Romero called out all of his people, imploring them individually and collectively to reclaim their consciences, to resist violence and to work toward solutions respectful of human dignity. Each week he challenged fake news and publicly named the dead and disappeared. He used his Sunday homilies (which were, in effect, his social media platform), as a means of prophetic resistance, catechesis and the formation of consciences.

As our national border crisis swirls out of control, sucking into its vortex of destruction those who are generally people of good will, where are our Romeros? The inability of U.S. Catholic Church leadership to function as a cohesive, persistent and loud prophetic voice in this time of national scandal is rooted, in part, in an enduring failure of individual and collective consciences to systemically and justly address abuse within "our own house." The process of accompanying individuals and communities in the formation of consciences should not be restricted to matters of sexuality or religious liberty narrowly construed.

Advocacy, prayer and charity are not enough to revoke policies, practices and laws that sanction the abuse of migrants, refugees and their children. It is high time to remind all Catholics who are enabling or engaging in violations of human dignity to "take back your consciences." Echoing once again Romero's plea "in the name of God, and in the name of this suffering people, whose laments rise to heaven each day more tumultuous … stop the repression."

[Portions of this column are a revised version of "¡CESE LA REPRESIÓN! Romero, an Inconvenient Saint for Our Troubled Times," presented at the University of Notre Dame in October 2018.]

[Carmen Nanko-Fernández is professor of Hispanic theology and ministry, and director of the Hispanic Theology and Ministry Program at Catholic Theological Union (CTU) in Chicago. The author of Theologizing en Espanglish (Orbis), she is currently completing ¿El Santo? Baseball and the Canonization of Roberto Clemente (Mercer University Press).]