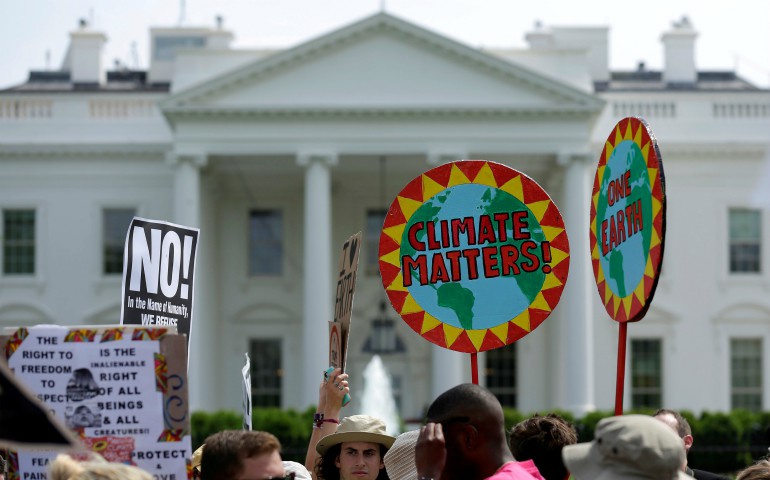 Protesters carry signs during the People's Climate March April 29 outside the White House in Washington. The U.S. bishops June 1 urged President Donald Trump to honor the nation's commitment to the Paris climate pact and protect the planet. (CNS photo/Joshua Roberts)

Editor's Note: This guest commentary titled "The Paris Agreement and global solidarity" was written by Bishop Oscar Cantu of Las Cruces, New Mexico, who is chairman of the U.S. Conference of Catholic Bishops' Committee on International Justice and Peace, and Bishop Frank J. Dewane of Venice, Florida, chairman of the USCCB's Committee on Domestic Justice and Human Development.

President Donald Trump is taking time to listen to his advisers on whether the United States should honor the Paris Agreement on climate change. The administration has repeatedly delayed its decision and an announcement is expected after the meeting of G-7 leaders in Sicily. This delay may be a good thing.

On his way to Sicily, President Trump met with Pope Francis, exactly on the second anniversary of the promulgation of "Laudato Si'" May 24. While it is not known that the date of their meeting was deliberate, Pope Francis gave a copy of his ecological encyclical to the president, who said he would read it. One may still hope that the president will embrace and apply the message of "Laudato Si'" during his term in office.

Hope defines us. Pope Francis' predecessor, Pope Emeritus Benedict XVI, wrote an encyclical on hope in which he admonished: "Let us say it once again: The capacity to suffer for the sake of the truth is the measure of humanity. Yet this capacity to suffer depends on the type and extent of the hope that we bear within us and build upon."

What kind of hope do we have? The Paris Agreement is important because it deals with great suffering that has overtaken the world. As Pope Francis indicates, the planet is beginning to look like "a polluted wasteland" and now creatures and people, often the poor, are bearing the consequences.

Change at this global scale can only come from a collective effort. Even then, a successful outcome is not guaranteed. Let us face it. While the emissions targets outlined in the agreement are ambitious, the details of how they will be achieved and enforced are modest. In practice, limiting warming to 2 degrees Celsius above preindustrial levels means reaching net-zero global emissions by around 2050.

In 2016, the global energy sector emitted 32.1 gigatonnes of carbon dioxide. Currently our technologies cannot provide the 7.5 billion people on the planet with carbon-free energy. So much of the world's population lives in poverty, and for carbon-free energy to supply the planet, it must become as affordable as its carbon alternatives. Political will is only a necessary condition to meet these goals, not a sufficient one.

Yet political will is still necessary. The power of the Paris Agreement lies in the fact that it expresses a universal and united political desire to work together. As an icon of international solidarity, the importance of the agreement transcends climate change itself. The Paris agreement is a modern symbol of global solidarity and unity towards the common good.

By withdrawing from the Paris Agreement, the United States would send the message that it doesn't care about the common good of all peoples and it has no appetite for solidarity. Furthermore, it would miss the opportunity to shape the future of the global energy revolution.

There are other high-emitting nations that are making great strides toward renewable energy development. In principle, this is good. However, some of these nations have also adopted values contrary to integral ecology, such as aggressive population control policies. Pope Francis said it loud and clear in "Laudato Si'": "Since everything is interrelated, concern for the protection of nature is also incompatible with the justification of abortion" (LS 120). Technology is never value free; the package of technical knowledge is always wrapped with the ideas and values of its manufacturer.

If the United States leaves the Paris Agreement other nations will become the energy revolution leaders. By leaving our seat at the table, our nation is also losing its ability to lead with our values. Our nation must honor the Paris agreement because it has the potential to make great contributions to the world.

President Trump's visit to Rome could not have come at a better time. Let us encourage him to uphold the values that have characterized us as a nation and to lead the world, in solidarity, to greater prosperity.