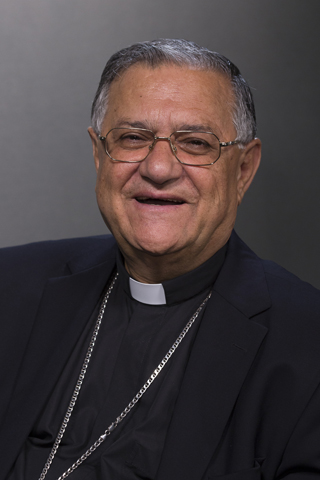 Latin Patriarch Fouad Twal urged moderate celebrations of Christmas this year because of the current political situation, but he also called for an end to the arms trade.

In his Dec. 16 Christmas message, he urged a more spiritual holiday celebration and also encouraged all parishes to turn off the Christmas tree lights for five minutes in solidarity with all the victims of violence and terrorism. In Bethlehem, West Bank, the Christmas Mass will be offered for the victims and their families, he said, "that they take to heart the participation in the joy and peace of Christmas."

At the local level, he urged Palestinian and Israeli leaders to have the courage to work toward a just peace, rather than war and violence.

"Enough of stalling, reluctance and false pretenses," he admonished. "Respect international resolutions. Listen to the voice of your people who aspire for peace, act in their best interest. Each of the two peoples of the Holy Land, Israelis and Palestinians, have the right to dignity, to an independent state and sustainable security."

"What suffering it is, to once again see our beloved Holy Land caught in the vicious cycle of bloody violence. What pain to see anew, hatred prevail over reason and dialogue. The anguish of the people of this land is ours, which we cannot ignore or disregard. Enough! We are tired of this conflict as we see the Holy Land sullied with blood," he added.

He called for the creation of a Palestinian state alongside Israel, and for the two to exist in "peace and tranquility."

Without naming specific groups, he said the situation in the Holy Land is a reflection of what is happening around the world, which is "facing an unprecedented terrorist threat."

He said that though recent attacks have taken place against France, Lebanon, Russia and the United States, people in Iraq and Syria have been suffering for years from the war. Syria is at the center of the crisis, he said.

"The future of the Middle East depends on the resolution of this conflict," he said.

He also condemned and called for an end to the weapon trade, which he said is perpetuating the conflict. He blamed "several international powers" for the continuation of a situation of "total absurdity and duplicity."

"On the one side, some speak of dialogue, justice and peace, while on the other hand promote the sale of arms to the belligerents," he said in his message. "We call to conversion these unscrupulous arm dealers who may be without conscience, to make amends. Great is your responsibility in these devastating tragedies, and you will answer before God for the blood of your brothers."

He urged world leaders to find the roots and cause of "this scourge."

"We must combat poverty and injustice, which may constitute a breeding ground for terrorism. Similarly we must promote education on tolerance and acceptance of the other," he said.

In response to a journalist's question, the patriarch said that while he welcomed current international attention and solidarity with the plight of Christians in the Middle East in light of the fighting, he lamented that it is only when their own interests are affected that they have finally begun to take notice of the Christians of the Middle East.

"There have been thousands and thousands of Iraqis and Syrians who are suffering," he said.

He noted the importance of the 50th anniversary of "Nostra Aetate," the Declaration on the Relationship of the Church to Non-Christian Religions, and its role as the foundation for dialogue.

"Here in the Holy Land, this dialogue is of paramount importance where difficulties exist, but it is necessary to continue to hope all the more, to the viability of a Jewish-Christian-Muslim dialogue," he said.

He invited pilgrims to continue visiting the Holy Land, despite the current tense situation, and said they would find three doors designated as Doors of Mercy during the Year of Mercy.

"The pilgrim route is safe and they [pilgrims] are respected and appreciate by all sectors in the Holy Land," he said.