Skip to main content
News
This story appears in the Francis in Egypt feature series. View the full series. 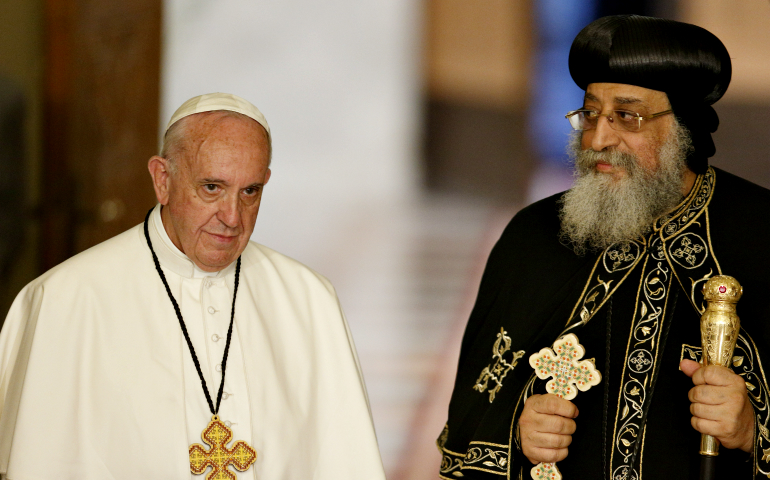 Pope Francis' trip to Egypt was marked Friday, April 28, by a significant step forward in ecumenical relations between the Roman Catholic and Coptic Orthodox Churches.

In a joint declaration signed April 28 by Francis and Coptic Pope Tawadros II of Alexandria during Francis' visit to the Orthodox St. Mark Cathedral in Cairo, the two churches agreed that they would not hold baptisms for members of one church wishing to join the other.

"We, with one mind and heart, will seek sincerely not to repeat the baptism that has been administered in either of our Churches for any person who wishes to join the other," the two popes said in the declaration. "This we confess in obedience to the Holy Scriptures."

The declaration carries significance because Catholics and many Christian churches teach that people can only be baptized once in their lives. Re-baptizing someone is seen as a way of lessening the significance of the person's original baptism and faith community.

Release of the declaration came as a surprise. It was not listed on the schedule of events for Francis' April 28-29 Egypt trip.

In an interview before the trip, one expert on relations between the two churches had told NCR he did not expect them to come to agreement on the issue of re-baptism.

Paulist Fr. Ron Roberson, associate director of the U.S. bishops' Committee on Ecumenical and Interreligious Affairs, said that while re-baptism was a "serious question" between the churches, he thought the issue might come up in private discussion but not in public.

The signing of the declaration came after Francis and Tawadros gave public remarks inside the cathedral church, which just three weeks ago was the scene of a bombing that killed dozens. People were killed in a chapel adjacent to the church while they were praying and preparing for Palm Sunday celebrations April 9.

"Your sufferings are also our sufferings," he said. "Let us strive to oppose violence by preaching and sowing goodness, fostering concord and preserving unity, praying that all these sacrifices may open the way to a future of full communion between us and of peace for all."

Tawadros told Francis that while his people have lived through "difficult and turbulent periods," Egyptians are united in standing against violence.

"In these difficult times, the true worth of Egyptians manifests itself, united by joy and pain, announcing to the whole world that our disgrace and pain are those of a country united in agreement: Criminal minds cannot ever break or belittle the hearts of citizens," he said.

Tawadros also praised Francis for choosing to emulate St. Francis of Assisi by coming to Egypt. St. Francis came to Egypt as a pilgrim of peace in the 13th century during the fifth crusade.

Tawadros said that visit was "one of the most important experiences of intercultural dialogue in history, a dialogue which is renewed today with your visit to confirm the fact that dialogue is the way and the bridge that unites peoples and is the constant hope of humanity through the centuries."

Following the signing of the joint declaration, Francis and Tawadros led an ecumenical prayer service for Coptic victims of violence in Egypt.

Ecumenical Patriarch Bartholomew was also present for the service, which included prayers from the two popes, a reading from Matthew's rendition of the Sermon on the Mount, and a joint Our Father prayer.

The Coptic Orthodox Church of Alexandria is a small minority in Egypt, where about 90 percent of the country's population of some 92 million identifies as Muslim.

The church traces its founding to the apostle Mark and is one of six churches that form Oriental Orthodoxy. Those churches, which have about 84 million members together, recognize only the first three ecumenical councils, breaking off from the other Christian churches in the fifth century.