Content from NCR special sections, including our August 2-15, 2013, Peace 7 Justice edition, is not available online. These sections explore topics important to today's Catholics, including Our Environment, Catholic Education, Family Life and Theology. 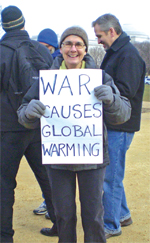 Watching newsreel footage of rallies against the Vietnam War in the 1960s and 1970s, one is struck by the large numbers of Catholic religious men and women who joined those protests. The anti-nuclear protests of the 1980s also drew many Catholics. Yet, with the U.S. in the second decade of a war on terror, can the same be said of today’s anti-war movement? Is there anything significant enough to be called a Catholic peace movement in the United States?

In June, at its 40th anniversary national conference in Atlanta, Pax Christi USA drew fewer than 200 people. The group that bills itself as the “national Catholic peace movement” is struggling to increase membership and raise funds. At present, Pax Christi USA includes just four full-time staff members and a part-time bookkeeper, down from the days when more than a dozen were on staff. 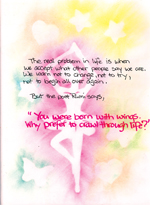 The journey from margin to center
By Diane Pendola

“When did you know that we weren’t on the margins but at the center?” The question felt poignant. It came from one of the women in our core group of LiT-uPP From the Inside Out, or the Lioness Tale Prison Project. She was reading a book that held a chapter on this project for women serving life sentences in a maximum-security prison. I knew the lines she was referring to because I had written them. They read:

These women ... are not on the margins. They are at the very center. And in the midst of an inherently violent and dehumanizing system that would relegate them to the status of nonpersons, they can claim their personhood. … They become not the victims of a degrading system but the very instruments of its transformation. 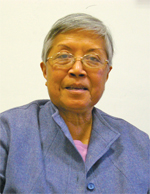 ROME: Maryknoll Sr. Teresa Dagdag isn’t more than a 10-minute drive from the Vatican. Her office at the  headquarters of the De La Salle Christian Brothers is due west of the colonnades of St. Peter’s Basilica.

Yet, as 115 men gathered there in early March to elect a new Roman pontiff, she and the other sisters, brothers and priests she works with were busy focusing on things like human trafficking, migrants, and structures of sexism — even inside the Roman Catholic church.

A native of the Philippines, Dagdag is the executive co-secretary of a group of leaders of international orders
of men and women religious who focus on social justice issues. ... PRINT ONLY