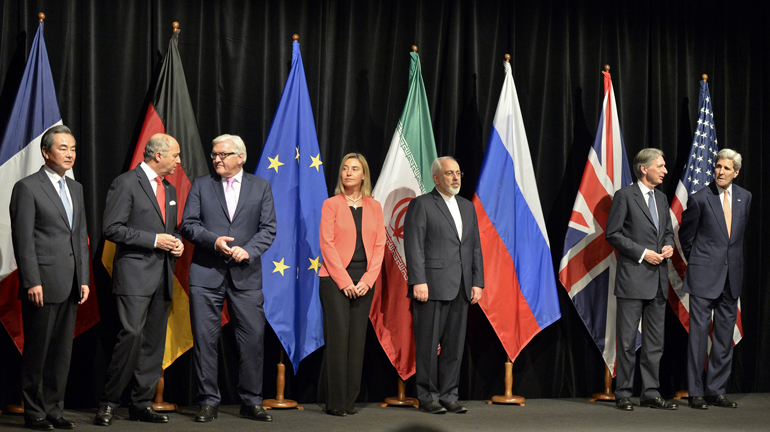 Agreement and a coordinated strategy across a broad spectrum of Catholic groups, including the U.S. bishops' conference, in support of the Iran nuclear deal demonstrates a growing "seamless garment" approach to difficult public policy issues, say Catholic advocates involved in influencing opinion on the Iran deal.

The response from the Catholic community in support of the deal, which will lift economic sanctions on Iran in return for a moratorium on the country's pursuit of nuclear weapons, has been sweeping. It follows similar Catholic hierarchical and grassroots unity in their unsuccessful opposition to the Trans-Pacific Partnership, a trade-deal pursued by the Obama administration between the U.S. and several Pacific Rim countries that Catholic and labor groups said would hurt average working people in the States and abroad.

The seamless garment is a term that was popularized by the late Catholic Cardinal Joseph Bernardin and refers to a "consistent ethic of life," or moral concern relating to questions of human dignity over the entirety of life, ranging from abortion to war, poverty to capital punishment.

Congress is in a 60-day assessment period leading up to a vote to approve or reject the agreement by Sept. 17. Lobbying in Congress on both sides of the agreement has been intense.

In July, shortly after the deal with was reached, Bishop Oscar Cantú, chairman of the Committee on International Justice and Peace for U.S. bishops' conference, sent a letter to every member of Congress welcoming "the momentous agreement," which he said "signals progress in global nuclear non-proliferation."

In the letter, Cantú, who recently visited Japan for the 70th anniversary of the bombings of Hiroshima and Nagasaki, said, "The United States and its international partners have taken a remarkable step with Iran in reaching this agreement. We encourage Congress to support these efforts to build bridges that foster peace and greater understanding."

The U.S. bishops "will continue to urge Congress to endorse the result of these intense negotiations because the alternative leads toward armed conflict, an outcome of profound concern to the Church," Cantú wrote.

Since then, the conference and a variety of Catholic groups have been in touch regarding the Iran deal, which finds itself in political jeopardy.

On Aug. 11 a yet unnamed coalition of Catholic organizations -- including the Franciscan Action Network, Catholics in Alliance for the Common Good, Pax Christi International, Maryknoll and NETWORK -- met to discuss a Catholic grassroots approach to promoting passage of the deal. A representative from the progressive advocacy group MoveOn.org also took part in the discussion.

According to sources from within the coalition and the conference, the two Catholic bodies have been in touch and have decided to work independently in the effort to persuade Congress and Catholic voters, but only in order to amplify the unity of their "Catholic voice" on the Iran nuclear issue.

"We will continue to speak in multiple voices, but thinking together," said Marie Dennis, co-president of Pax Christi International.

"We are complementing one another," said Stephen Colecchi, Director of the conference's Office of International Justice and Peace. "We are pursuing a parallel and, you could even say, coordinated strategy."

Dennis said it is "a little bit unusual for us as Catholic groups across a pretty broad spectrum of outreach to think together about how can we do this in a way that will ensure our voice is heard."

That the bishops' conference is speaking out on the question of war and nuclear proliferation is nothing new, said Patrick Carolan, of the Franciscan Action Network.

"On peace keeping, when we went to war in Iraq, the bishops' conference was not in favor," he said, "they were strongly opposed."

Colecchi agreed. "I don't think it's new, exactly," he said. "On nuclear weapons, we go back to 1963, Pacem in Terris, where Saint John XXIII called for a worldwide, verifiable ban on nuclear weapons."

But Carolan thinks the conference is becoming a "more vocal … I think they're being more proactive about the message peace."

"That is the message that is starting to resonate and come out," he said. "It's the message of Pope Francis. And I think bishops in the United States and in other countries are getting it and understanding it. And I think that's a wonderful thing."

"I do sense that Catholic leaders feel inspired by this pope to speak out in a bolder and more expansive way," wrote John Gehring, Catholic program director at Faith in Public Life, in an email.

"The pope is broadening the pro-life frame by insisting that extreme inequality, climate change and a globalization of indifference that treats migrants as expendable all degrade human dignity," said Gehring, author of the upcoming book The Francis Effect: A Radical Pope's Challenge to the American Catholic Church. Gehring did not participate in the coalition meeting.

"It's traditional Catholic social teaching but Francis has prioritized it in a way that makes everything feel new. He is helping to rebalance a Catholic narrative in this country that in recent years had been narrowly defined and stuck in the culture wars."

Meanwhile, the American Jewish response to the Iran nuclear deal has been anything but seamless.

According to a poll from the liberal Jewish group J Street, which supports the deal, "a large majority of [U.S.] Jews support the agreement recently reached between the United States, world powers, and Iran."

The Jewish Journal also reported on polling that found wide support among Jewish-Americans. But a poll from The Israel Project says that "by a narrow margin, a plurality of Jews want Congress to reject the deal."

"The Jewish community is really divided on the issue," said Rabbi James Rudin, senior interreligious adviser of the American Jewish Committee, which opposes the agreement. "There's a division within the Jewish community, and I would say an honest division, because it's such a consequential thing."

In part because of that division, Rudin doesn't see the possibility for damage to Catholic-Jewish relations.

"I don't think it's going to affect Catholic-Jewish relations at all," he said.

"And if I'm right," he added, "that's a tribute to the past 50 years of hard work that many of us have done in building up the relationships, which are really quite profound."