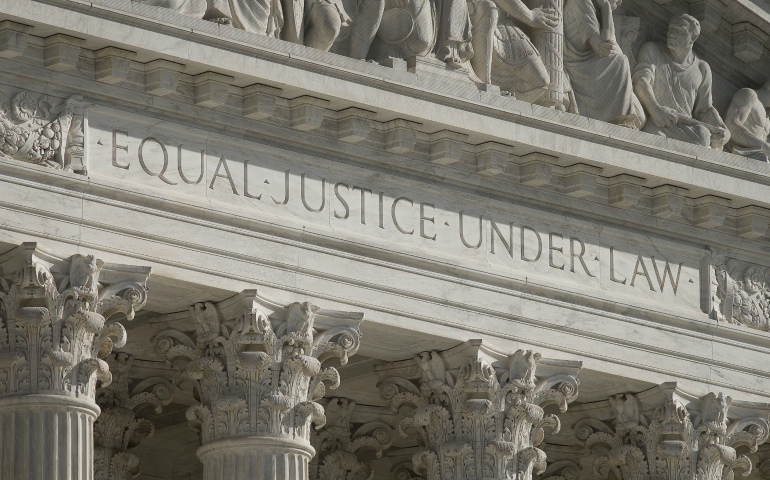 The U.S. Supreme Court in Washington is seen Jan. 31. The court sent a Texas death-row case back to lower courts March 28, saying the inmate's intellectual disability should prevent his execution. (CNS photo/Tyler Orsburn)

The U.S. Supreme Court sent a Texas death-row case back to lower courts March 28, saying the inmate's intellectual disability should prevent his execution.

The court's 5-3 decision reversed a Texas appeals court ruling that said inmate Bobby James Moore was not intellectually disabled based on state criteria and could face execution.

Karen Clifton, executive director of the Catholic Mobilizing Network to End the Death Penalty, praised the Supreme Court's decision, calling it "the needed step toward justice for some of the most vulnerable in our society."

"In affirming a person with intellectual disabilities should not be executed, the court made it clear that states must uphold the needs of all of its citizens," she said in a March 28 statement.

"Texas cannot satisfactorily explain why it applies current medical standards for diagnosing intellectual disability in other contexts, yet clings to superseded standards when an individual's life is at stake," Ginsburg wrote.

In 2002, the Supreme Court's Atkins v. Virginia decision said executing the intellectually disabled violated the Eighth Amendment's ban on cruel and unusual punishment but the court largely left it up to the states to implement the ruling.

According to the state of Texas, Moore passed criteria measuring his intellectual ability and so could face the death penalty for fatally shooting a store employee in 1980 during a botched robbery.

Ginsburg said the state court should have looked at more factors to determine Moore's intellectual ability, saying his passing score of scoring 74 on an IQ test, four points above the court's indication of intellectual disability, could have fluctuated in the range from 69-79.

The court opinion also said the state failed to consider current clinical standards in evaluating Moore — such as his ability to handle demands of everyday life — and instead focused on what the court called his "adaptive strengths," including that he "lived on the streets, mowed lawns and played pool for money."

The opinion noted that even when he was 13, Moore "lacked basic understanding of the days of the week, the months of the year, and the seasons; he could scarcely tell time or comprehend the standards of measure or the basic principle that subtraction is the reverse of addition."

Chief Justice John Roberts wrote the dissent, joined by Justices Samuel Alito and Clarence Thomas, arguing that it had not been proved Moore had enough of an intellectual disability.

He also said the court's ruling in Moore did not give states enough guidance about how to proceed with future similar cases.

The court's decision was its second ruling in a Texas death penalty case this term. In February, it blocked the execution of an African-American inmate on death row in Texas over racially biased testimony.

In a 6-2 ruling in that case, the court agreed that Texas inmate Duane Buck had been unfairly represented by an expert defense witness who told jurors that Buck was more likely to commit violent crimes in the future because he is black.

Amy Howe, writing for a blog about the Supreme Court, scotusblog, said the court's decision in Moore, although not entirely unexpected, represents a major victory for Moore and other intellectually disabled inmates on death row in Texas.

"It will likely lead to new litigation in the other states that have not adopted legal definitions of intellectual disability that are not specifically based on the current medical standards," she added.

That would work for Clifton, the Catholic anti-death penalty leader, who stressed that "people with intellectual disabilities should not be sentenced to death" and applauded the court "for calling attention to this grave injustice."