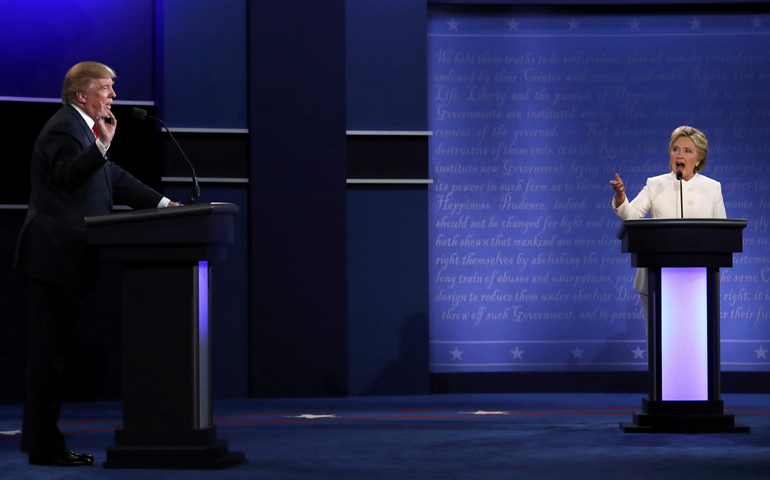 What to make of this election?

The debates, to much fanfare, are over. Just 14 days now remain in the 2016 presidential campaign before votes are cast and counted on Nov. 8.

As the conclusion nears, it's no doubt difficult to place context on an election cycle that began nearly two years ago, saw more than two-dozen candidates enter and exit, and has exposed the country to some of the harshest rhetoric heard in modern times — as television, the internet and social media have intensified the scrutiny of each candidate — as well as exhumed some of the nation's own once-cloaked social sores.

"The challenge of this election — it's so unconventional," said Patrick Maney, a history professor at Boston College specializing in U.S. politics and the presidency.

"And yet, because it's unconventional — we've never had a campaign quite like it — there's a temptation to think that it's dramatically different or more important than previous campaigns, and that I'm not quite so sure about," he said.

In Maney's estimation, the 2016 campaign between Democratic nominee Hillary Clinton and Republican candidate Donald Trump ranks among the most divisive and contentious. But as for its importance, he said it pales when compared to nearly every election from the Great Depression and the eve of World War II through the end of the Cold War.

Part of the loss of perspective comes from the swelling media attention that has swarmed recent elections, as the internet and social media have elevated more and more voices into the mainstream of public discourse.

U.S. politics have always had a level of mudslinging to them, said Diane Heith, chair of the government and politics department at St. John's University, in Queens, N.Y., all the way back to their origins in the feud between Thomas Jefferson and Alexander Hamilton, captured in part in the hit Broadway musical "Hamilton."

"They just did it in a very high-brow way in their party's newspapers," she said, though conceded the vitriol has reached new levels this year, in particular in the personalization of the verbal attacks from the candidates themselves.

Attitudes, problems out in the open

Beyond the bevy of verbal slings and arrows, social media has also served to amplify the divisions polling shows present among the electorate. Both candidates are historically disliked, with unfavorability polling for Clinton consistently above 50 percent, and for Trump, around 60 percent, according to Real Clear Politics. Those negative ratings "seem to fit the mood of the country" toward their government and elected officials, Heith said.

"And if you think about both Trump and [Vermont Sen. Bernie] Sanders, I think you could say there was clearly, in both wings of the parties, there was a real cry for something different. A real sense that there are people who feel not represented by traditional politicians," she said.

That sense has been tirelessly probed and analyzed by think tanks and the media in an effort to understand the rise of passionate supporters behind each of those candidates, primarily among working-class Americans.

The "tell it like it is" style of both Trump and Sanders, in a way, peeled away the veneer that often covers or distorts traditional election dialogue, Maney said. Ultimately, that may be a healthy development, he said, "because it's been revealing attitudes and values that we haven't acknowledged that are there, but haven't been created by this election." Attitudes, among others, on immigration, on religious values and diversity, on race, and on law and order.

"I think in some ways it's better to have things on the surface; we're closer to solving our problems once things are really out in the open," Maney said. "I'm an outlier in viewing the election as a positive thing, but it seems to me, this election is really forcing kind of a shakedown cruise for both parties, in that they really have to decide what they're all about."

The "wellspring of resentment" toward traditional politicians among the working class in the Rust Belt and coal country is a result of both Democrats and Republicans failing to address their grievances, Maney said. Returns from the GOP primaries showed roughly a third of the Republican Party rejecting the leadership's plans and instead supporting the unconventional Trump, Heith added. In his time on the campaign trail, Vice President Joe Biden has urged his party to better connect with the concerns of the middle class.

That both parties have been forced into internal debates on issues impacting working Americans, at a moment when the economy is evolving and becoming more technology-based, is a good thing.

"At times I think this is the worst, most toxic campaign in modern history; other times, that it might lead to a healthy, if wrenching, coming to grips with what ails us," Maney said.

The idea of defining what one stands for also extends to religious groups, the exercise perhaps no more visible than within the evangelical and religious right community.

Their siding with Trump was a most incongruous matchup from the start: The New York businessman, whose life even prior to the infamous "Access Hollywood" video defined every aspect of the worldliness denounced in Bible classes, declaring his love for "the evangelicals" during a June meeting in a Times Square hotel with the "who's who" of conservative Christianity in the U.S. And "the evangelicals," at least in the person of some high-profile leaders of the Christian right, responding in kind.

The love was sorely tested in recent weeks, most prominently by the 2005 "Access Hollywood" video where Trump boasted of interactions with women involving nonconsensual groping and kissing. The candidate later apologized for the comments, labeling them nothing more than "locker room talk" that never became actions. Since then, more than a dozen women have accused Trump of sexual assault; he has denied all allegations.

That video, however, only exacerbated some of the breaches that had been developing in the evangelical community for some time, according to religion historian Randall Balmer.

If the New York gathering seemed an unlikely lovefest to some, to Balmer, the John Phillips Professor in Religion at Dartmouth College, it was far from surprising. The meeting, he said, was an inevitable conclusion to a long journey for evangelicals in which biblical values have been traded over time for access to power and love of wealth.

In an op-ed in May in the Washington Post, Balmer said the affinity then between Trump and evangelicals "seems improbable" but quite understandable because the modern religious right movement "was never about the advancement of biblical values." Quite to the contrary, he said, it "is a movement rooted in the perpetuation of racial segregation, and its affiliation with the hard-right fringes of the conservative movement in the late 1970s produced a mutant form of evangelicalism inconsistent with the best traditions of evangelicalism itself."

While those identified today as white evangelicals place at the top of the agenda opposition to abortion and same-sex marriage, Balmer said that is not necessarily the case with young evangelicals and it certainly was not the case at the start of the movement, with the real catalyst a defense against IRS attempts "to rescind the tax exemption of racially segregated institutions, especially Bob Jones University and Jerry Falwell's segregated Liberty Christian Academy in the 1970s."

Balmer told NCR the very definition of "evangelical," historically not a monolithic reality but covering a variety of religious expressions, is called into question today given the growing splits among the movement and its political ambitions.

Today, he said, the splits in the evangelical community are more along demographic lines — gender, generation and race — than along doctrinal or theological issues.

And the new splits often emerge out of politically charged circumstances. Balmer said he began to notice a distance between the concerns of high-profile evangelical leaders and young evangelicals during visits to Christian colleges around the 2008 campaign. Figures such as Charles Colson and James Dobson, he said, were claiming "the only salient moral issues are abortion and same-sex marriage." Younger evangelicals, however, were talking about "a much broader spectrum of issues that they consider moral issues," including poverty and a heavy interest in environmental concerns, he said.

The rise of Trump has exposed those divergent views even more. A number of younger leaders rejected Trump early in the election season, as well as a recent push from a small group of students at Liberty University.

"Trump has consistently normalized violence, sexual deviance, bigotry and hate speech," Jen Hatmaker, a popular evangelical author and speaker, recently told The New York Times. "I wouldn't accept this from my seventh-grade son, much less from a potential leader of the free world."

From the close proximity of the present, the divides in America exposed by the 2016 election appear acute and the challenge for the next president to unite immense.

The Pew Research Center, in a September report titled "The Parties on the Eve of the 2016 Election: Two Coalitions, Moving Further Apart," stated "the two parties look less alike today than at any point over the last quarter-century," when examined by characteristics such as religion, race and education.

"The Democratic Party is becoming less white, less religious and better-educated at a faster rate than the country as a whole, while aging at a slower rate. Within the GOP the pattern is the reverse," Pew found.

Past elections, though, have been waged under similar, if not more severe, circumstances.

At the extreme ends, Abraham Lincoln and Franklin D. Roosevelt entered the White House amid national turmoil. Lincoln, having emerged from a four-candidate field, two from a fractured Democratic Party, garnered just 40 percent of the popular vote in November 1860; before Inauguration Day, seven southern states would secede. FDR, on the other hand, on Nov. 8, 1932, won in a landslide, with a clear mandate from the country to implement his New Deal after it suffered through three years of the Great Depression.

More recently, George W. Bush took the White House in 2000 after having lost the popular vote but won in the Electoral College after a contentious recount of votes in Florida; meanwhile, the Senate split and Republicans held a slim majority in the House of Representatives. Eight years earlier, Bill Clinton won handily in the Electoral College, but carried a mere 43 percent of the popular vote, the lowest total by a victorious candidate since Richard Nixon in 1968.

The magnitude of divisions present in current times won't be fully clear until the votes are counted, said Heith, the politics professor at St. John's. Whereas Hillary Clinton has appeared to at least absorb some of the issues raised by Sanders and his supporters, the split among Republicans remains a fracture.

The latest polls show Clinton the heavy favorite two weeks out to claim victory on Nov. 8. [FiveThirtyEight.com places her chances at 86.3 percent; The New York Times' The Upshot blog gives her a 93 percent chance of becoming the 45th president of the United States.]

If Clinton does win, and wins big, that won't necessarily be a sign of universal support, Heith said, because her ideas may have done less to unite voters than widespread rejection of Trump. What happens in Congress and voter turnout may offer better indicators, she added.