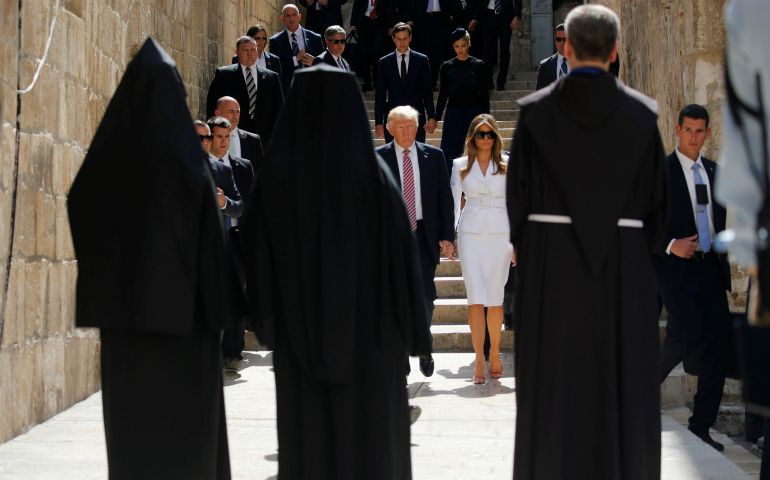 President Donald Trump's speech at the Israel Museum May 23 put extra emphasis on spiritual themes, but experts are skeptical that Trump will be able to translate his lofty statements into concrete action. It was the final event during his 27 hours in Israel and the Palestinian territories.

"The fact that now people have been made aware of the emphasis on religion is a good thing," said Archbishop Pierbattista Pizzaballa, apostolic administrator of the Latin Patriarchate of Jerusalem. "But we really hope that he goes forward and these things don't remain on the level of slogans and talking."

Trump stopped short of recognizing Jerusalem as the capital of the Jewish people, something many right-wing Israelis had hoped would happen ahead of the anniversary of the Six Day War and Israel's annexation of East Jerusalem, which is celebrated on May 24 (the day after Trump left).

Instead, Trump told the crowd of gathered dignitaries, members of Knesset, religious leaders and others that "the ties of the Jewish people to this Holy Land are ancient and eternal."

Although many politicians in Israel hailed this description of Jerusalem's historical ties to Judaism, Pizzaballa took a more measured approach. "This is not something new," Pizzaballa told NCR as he exited the Israel Museum speech on Tuesday and Trump's motorcade left for the helicopter pad. "He also mentioned all of the other religions. We are all rooted to Jerusalem, nothing has changed."

Alan Sager, a businessman from Austin, Texas, who attended the Israel Museum speech as part of the Republican Jewish Coalition, said he found the reverential references to religion the most moving part of the speech.

"Just the allusions and metaphors and the way he spoke about God and religion was unbelievable," said Sager. "It's a level you don't usually hear from American presidents, though George Bush was pretty good."

"Yesterday, I visited the Western Wall, and marveled at the monument to God's presence and man's perseverance — I was humbled to place my hand upon the wall and to pray in that holy space for wisdom from God," Trump said in the speech. "I also visited and prayed at the Church of the Holy Sepulcher, a site revered by Christians throughout the world." Trump did not visit the Church of the Nativity in Bethlehem, which was originally rumored to be part of the itinerary.

"As we stand in Jerusalem, we see pilgrims of all faiths coming to this land to walk on this hallowed ground," Trump continued later, after talking about security. "Jews place the prayers from their hearts in the stone blocks of the Western Wall. Christians pray in the pews of an ancient church. Muslims answer the call to prayer at their holy sites. This city, like no other place in the world, reveals the longing of the human heart — to know and worship God. Jerusalem stands as a reminder that life can flourish against any odds."

Trump did not provide any specifics on how he would achieve peace in a conflict that has lasted thousands of years, like the many issues that have held up Palestinian-Israeli negotiations in the past; these include Israeli settlements in the West Bank, sovereignty over Jerusalem, and the two-state solution with a sovereign Palestinian state.

"I didn't expect a lot, and not a lot happened; when it comes to Trump, I'm pretty timid," said Amnon Ramon, a senior researcher with the Jerusalem Institute for Policy Research. "He uses religion because he knows that in the U.S. that's the right language to use when talking to the right-wing Americans. It's something personal, but I don't think anything stands behind it."

Ramon pointed out that prior to the trip, Trump rarely had bothered to make the distinction between radical Islam and mainstream Islam.

As Air Force One lifted off towards Italy, Trump watchers turned their attention to his upcoming meeting with Pope Francis on Wednesday morning.

Pizzaballa said it was difficult to predict what will happen with the meeting between the pope and president. "It will be very different from this [part of the trip]," he said. "I'm sure they'll talk about the Middle East trip, and I hope they can work some things out."

Ramon took a cynical view of the meeting. "I think he's taking advantage of the pope," said Ramon. "This is a person whose traditional behavior, the way he's talking and the culture of lies that he lives in, is so different [from Pope Francis]. I'm not so excited by anything of this."