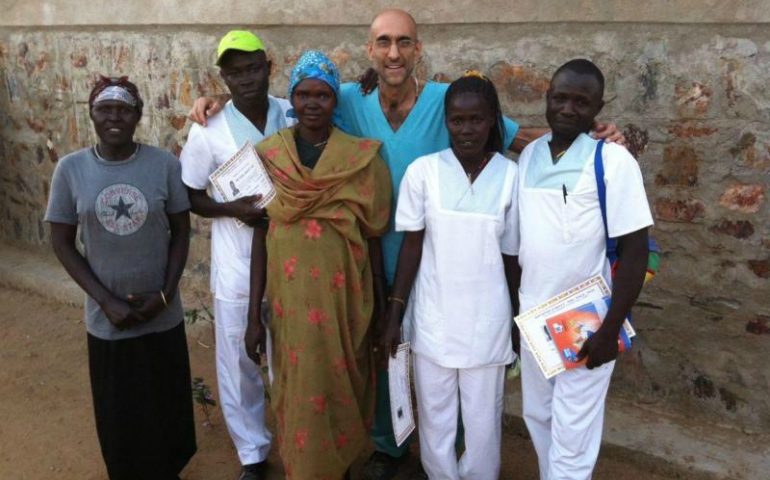 Dr. Tom Catena is pictured with his medical team in outside Mother of Mercy Hospital in Gidel, Sudan, in 2013. (CNS/courtesy CMMB)

Hidden in the Nuba Mountains of Sudan, a war zone for the past few years, a U.S. Catholic missionary, Dr. Tom Catena, ministers to a village of 750,000 people as the single medical doctor in the area.

He says his faith is the primary motivation for his work and that he relies on his faith to keep up with the unrelenting nature of his work.

"We have very clear directives from our Lord as to how to treat our brothers and sisters who are 'the least of these,'" Catena said in a June 5 email to Catholic News Service.

Catena received the Aurora Prize for Awakening Humanity May 28 in Yerevan, Armenia, for his work among the people in Sudan.

The Aurora Prize has been awarded annually since 2015 "to an individual whose actions have had an exceptional impact on preserving human life and advancing humanitarian causes," according to the Aurora Humanitarian Initiative's website.

Founded in an effort to honor the lives lost in the Armenian genocide of 100 years ago — when 1.5 million Armenians were killed by Ottoman Turks — the foundation supports individuals who dedicate their lives to serving those in need.

Catena assists as many as 500 patients in one day. While he remains the only permanent doctor in the area, other volunteers have been able to assist for short periods of time. Their secluded location in the Nuba mountains, as well as their proximity to the war front, makes it difficult for others to assist.

Catena is completely open about the difficult work that his job entails. But it isn't the tiring work, or the vast amount of people to whom he tends daily that makes his job difficult. He said it is the death of his patients.

"The most difficult part is having your patients die," Catena told those in attendance at the Aurora Prize ceremony. "It is the most excruciating pain imaginable. A child that was hit with an incendiary bomb, burns over 60 percent of his body, dies in your arms. In the female ward, a woman with terminal breast cancer dies.

"A woman who had a leg amputation dies. A pregnant woman with pre-eclampsia dies during childbirth," he continued. "A mother is screaming in grief because her baby has just died from measles. In the male ward, a soldier you operated on dies and you are trying to explain to the family what happened. And that's just a typical day."

His remarks at the ceremony were released by the Catholic Medical Mission Board, known as CMMB, in its announcement of him receiving the prize.

The Nuban people in Sudan have been suffering since April 2012 when the Sudan government began a bombing campaign against those they assume to be associated with Nuban rebels. Since then, the Sudan government has dropped 4,802 shrapnel bombs on civilians, according to Nuba Reports, an online news site. The bombings have left civilians suffering and injured.

"I went outside and when I looked up, I saw a Sudanese plane flying over," Catena said as he received the Aurora Prize. "They started dropping some bombs and my first feeling was, 'Don't these people know that there are people down here?' Then it occurred to me that they don't care. They don't care about me or the Nuban people crouched down here and cowering for our lives."

He added, "I think that is the crux of our problems. One group thinks that their lives are more valuable than others. I felt that my life was equal to the Nuba people in the foxhole with me. If we took this one small step, it would be a step toward solving this crisis."

Along with the award, Catena receives a $100,000 grant and $1 million prize, which he has given to three organizations, one being CMMB. The organization has assisted Catena in his efforts as well as the hospital where he works, Mother of Mercy Hospital, with donations of pharmacy goods as well as financial and other aid.

Bruce Wilkinson, CMMB president and CEO, said the organization is proud to be partners with Catena.

"Dr. Tom inspires all of us by his selfless dedication to bringing healing and hope in a forgotten and war-ravaged part of the world," Wilkinson said in a statement. "His humble and long-term service sets an example for humanitarians everywhere and challenges them to recommit to the struggle for justice and protection for the most vulnerable."

Co-chair of the Aurora Prize Selection Committee, George Clooney, the Academy Award-winning actor, said Catena is a role model to all.

"As violence and war continue to threaten people's spirits and perseverance, it is important to recognize, empower, and celebrate people like Dr. Catena who are selflessly helping others to not only survive, but thrive," Clooney said in a statement.

Originally from Amsterdam, New York, Catena played football at Brown University. Receiving his medical degree in 1993 from Duke University, which he attended on a Navy scholarship, he completed his residency in Indiana. Catena's missionary life began with a trip to Kenya while in medical school, and he returned to the life of a missionary following his residency.

Word of Catena's work has been spreading as he was named one of Time's "100 Most Influential People," in addition to being featured in the film "The Heart of Nuba," directed by Ken Carlson.

While war wages on, Catena is determined to remain with the people he serves.

"My decision to stay here was a simple one," Catena said. "As the only doctor at the only major hospital in the Nuba Mountains, I could not leave in good conscience. Also, as a lay missionary, I felt it was important to show the presence of the church in this time of need — to show that the church does not abandon her people when a crisis arises."

He said the Catholic community can assist him and provide support to the Sudanese people through prayer.

"There is incredible strength in a worldwide community showing solidarity with us through prayer," Catena told CNS. "We are very encouraged when we receive messages from all corners of the world that people are praying for us and are with us in our struggles. Catholic nurses and doctors can help us by putting their faith into action and coming to assist us in whatever way they can."