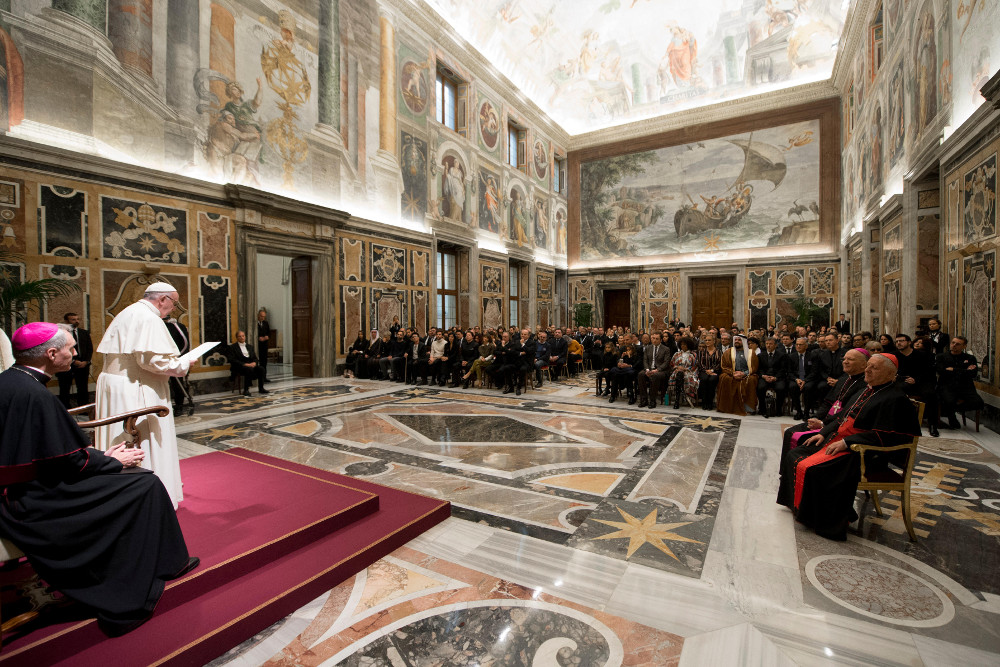 Pope Francis meets Dec. 14 with organizers and artists who will perform in a benefit Christmas concert at the Vatican. The concert proceeds will be donated to two organizations: Scholas Occurrentes in Iraq and the Don Bosco Mission in Uganda. (CNS/Vatican Media)

As the celebration of Christmas draws near, the plight of the Holy Family calls to mind the sufferings of the many men, women and children escaping war and persecution, Pope Francis said.

Meeting with organizers and artists participating in a benefit Christmas concert at the Vatican, the pope said the holy season is an invitation to come together to help those in need, especially young migrants who "instead of sitting in school desks, like many of their peers, spend their days doing long marches on foot, or on makeshift and dangerous means of transportation."

Educating young migrants will give them the tools to find "work in the future and participate in the common good as informed citizens. At the same time, we educate ourselves in order to welcome and show solidarity so that migrants and refugees do not meet indifference or, worse, intolerance on their journey," he said Dec. 14.

The proceeds of the Dec. 15 concert, which is sponsored by the Congregation for Catholic Education, will be donated to two organizations: Scholas Occurrentes in Iraq and the Don Bosco Mission in Uganda.

According to the Congregation for Catholic Education, the Don Bosco Mission aids refugees from South Sudan escaping civil war and is invested "in the training and professional development of young people."

Scholas Occurrentes, the congregation added, will use proceeds from the benefit concert to continue their educational initiatives in Irbil, Iraq, where, "for thousands of children and young people who live in refugee camps, going to school is their only chance for liberation."

During the papal audience, Cardinal Giuseppe Versaldi, prefect of the education congregation, said initiatives that help migrants and refugees are a reminder that humanity has a duty "to protect the civilian population, especially children, from the effects of war."

"The languages of music and art, linked to the Christmas season that celebrates the coming of the Son of God, help to manifest our generous support" for those most in need, Versaldi said.

In his address, Pope Francis said that Christmas is a time that awakens charity and "calls us to reflect on the situation of so many men, women and children of our time — migrants, refugees and displaced persons — who are marching on to escape wars and misery caused by social injustice and climate change."

Just like many migrants and refuges today, he added, the Holy Family experienced "the anguish of persecution" when fleeing to Egypt.

"Little Jesus reminds us that half of today's refugees in the world are children, blameless victims of human injustice," the pope said.

The pope said that initiatives, like those in Iraq and Uganda, are an opportunity for the church to respond to the tragedies that countless men, women and children face and to offer them a chance not only to receive an education, but also the means for them "to get back on their feet" with dignity, strength and courage.

He also thanked the artists and the event organizers for donating their time and talents to "light in every heart the warmth and tenderness of Christmas."

The mission of the church, the pope said, "has always been manifested through the creativity and genius of artists because they, through their works, are able to reach the most intimate areas of the conscience of men and women in every age."