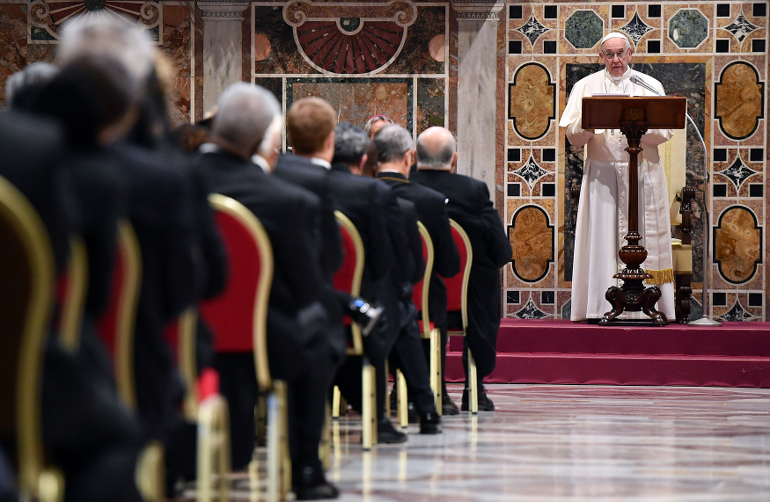 Pope Francis leads an annual meeting to exchange greetings for the new year with diplomats accredited to the Holy See, at the Vatican Jan. 7. (CNS photo/Ettore Ferrari, pool via Reuters)

Pope Francis issued a stark warning about the fragility of the international order Jan. 7, saying in an annual address to the Vatican's diplomatic corps that "the same attitudes" that led to the failure of the League of Nations now endanger the system of diplomacy set up after World War II.

The pontiff told the some 180 ambassadors accredited to the Holy See that the success of the diplomatic order rests on three foundations: good will among nations, their ability to deal fairly with one another, and openness to compromise.

"Whenever even one of these elements is missing, the result is a search for unilateral solutions and, in the end, the domination of the powerful over the weak," said the pope.

"The League of Nations failed for these very reasons, and one notes with regret that the same attitudes are presently threatening the stability of the major international organizations," he warned, before adding: "It is clear … that relationships within the international community, and the multilateral system as a whole, are experiencing a period of difficulty."

Francis was speaking Jan. 7 in an annual event in which he gives what is often called his "State of the World" address.

Like in past years, the pontiff's 55-minute speech in the Vatican's 16th-century Sala Regia focused on a range of issues and conflicts across the world. But unlike in past years, Francis' address also considered wider issues the pope said are threatening the international order.

Among the issues the pontiff identified: "nationalistic tendencies," "policies determined more by the search for a quick partisan consensus than by the patient pursuit of the common good," and "a gradual marginalization of the most vulnerable members of the family of nations."

Francis likewise criticized a kind of globalization that he said had "developed in too rapid and disorderly a manner, resulting in a tension between global and local realities."

"The global dimension has to be considered without ever losing sight of the local," said the pontiff. "As a reaction to a 'spherical' notion of globalization, one that levels differences and smoothes out particularities, it is easy for forms of nationalism to reemerge."

"Yet globalization can prove promising to the extent that it can be 'polyhedric,' favoring a positive interplay between the identity of individual peoples and countries and globalization itself, in accordance with the principle that the whole is greater than the part," he said.

Returning to his warning, the pontiff said that some of the issues he was highlighting "go back to the period between the two World Wars, when populist and nationalist demands proved more forceful than the activity of the League of Nations."

"The reappearance of these impulses today is progressively weakening the multilateral system, resulting in a general lack of trust, a crisis of credibility in international political life, and a gradual marginalization of the most vulnerable members of the family of nations," the pope reiterated.

After warning about the overall shape of the international order, Francis spoke to the ambassadors about four "points of contact" he sees between the work of multilateral diplomacy and the Vatican's spiritual mission: the primacy of justice and law, defense of the vulnerable, working to build bridges, and "rethinking our common destiny."

Francis began his reflection on each point by citing from Pope Paul VI's 1965 address to the United Nations, which was the first such speech given by a pontiff.

On the first point -- primacy of justice and law -- Francis said it was "troubling" for him to see "the reemergence of tendencies to impose and pursue individual national interests without having recourse to the instruments provided by international law."

"Such an attitude is at times the result of a reaction on the part of government leaders to growing unease among the citizens of not a few countries, who perceive the procedures and rules governing the international community as slow, abstract and ultimately far removed from their own real needs," said the pontiff.

"It is fitting that political leaders listen to the voices of their constituencies and seek concrete solutions to promote their greater good," the pope said.

But he continued: "Yet this demands respect for law and justice both within their national communities and within the international community, since reactive, emotional and hasty solutions may well be able to garner short-term consensus, but they will certainly not help the solution of deeper problems."

On the second point -- defending the vulnerable -- Francis said it was part of the responsibility of the international community "to give a voice to those who have none."

The pope mentioned in particular the people of Syria, and appealed for "an end to violations of humanitarian law, which cause untold suffering to the civil population, especially women and children, and strike at essential structures such as hospitals, schools and refugee camps, as well as religious edifices."

Francis also noted the numbers of migrants fleeing situations of violence or poverty in their home countries.

"All human beings long for a better and more prosperous life, and the challenge of migration cannot be met with a mindset of violence and indifference, nor by offering merely partial solutions," said the pontiff.

"I do not believe that partial solutions can exist for so universal an issue," the pope continued. "Recent events have shown the need for a common, concerted response by all countries, without exception and with respect for every legitimate aspiration, whether of states or of migrants and refugees themselves."

On the third point -- building bridges between nations -- Francis noted a number of positive developments that occurred in 2018, including: Eritrea and Ethiopia signing a peace agreement after decades of conflict, a new peace deal among the leaders of South Sudan, and what the pope termed "positive signs" on the Korean peninsula.

The pontiff also reiterated the Vatican's desire for a restarting of negotiations between Israel and Palestine, and for humanitarian assistance for those experiencing violence in Iraq and Yemen.

On the fourth point -- "rethinking our common destiny" -- Francis cited Paul's warning to the U.N. about the need for nuclear disarmament at the height of the Cold War.

"It is painful to note that not only does the arms trade seem unstoppable, but that there is in fact a widespread and growing resort to arms, on the part both of individuals and states," said the pontiff.

"Of particular concern is the fact that nuclear disarmament, generally called for and partially pursued in recent decades is now yielding to the search for new and increasingly sophisticated and destructive weapons," Francis continued.

The pope also spoke about the need for nations to "rethink our relationship with our planet" and said climate change is "among the issues urgently calling for an agreement within the international community."

Mentioning that 2019 is the 30th anniversary of the signing of the U.N. Convention on the Rights of the Child, the pontiff said: "Here I cannot refrain from speaking of one of the plagues of our time, which sadly has also involved some members of the clergy."

"The abuse of minors is one of the vilest and most heinous crimes conceivable," said the pope, promising that the church is "working to combat and prevent these crimes and their concealment, in order to ascertain the truth … and to render justice to minors who have suffered sexual violence aggravated by the abuse of power and conscience."

The pontiff then noted that he has called all the presidents of the world's conferences of bishops to Rome for a Feb. 21-24 summit on child protection, which he said will be a "further step in the Church's efforts to shed full light on the facts."

That February meeting is part of what looks to be a busy 2019 for Francis, who has confirmed he will be visiting Panama, the United Arab Emirates, Morocco, Bulgaria and Macedonia throughout the year; and has also mentioned other possible visits to Romania, Uganda, Mozambique, Madagascar, and Japan.