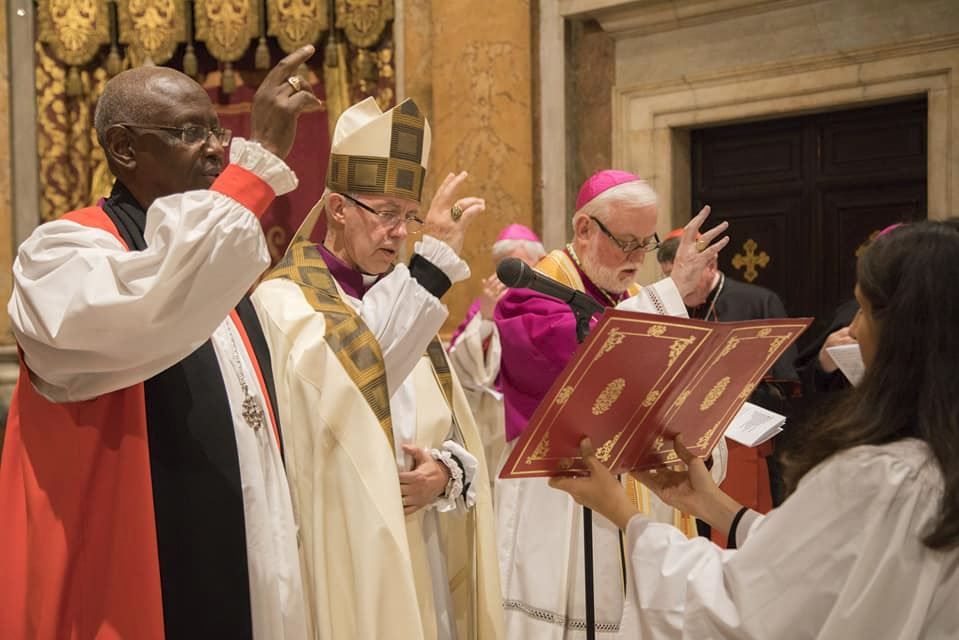 The Catholic archbishop who serves as the Vatican’s foreign minister has said the pursuit of ecumenical relations between different Christian churches should no longer be described as an “internal Christian affair” but has become a “moral imperative” due to the precariousness of the global political system.

Speaking in a ceremony Oct. 26 for the inauguration of the Anglican Communion’s new representative in Rome, Archbishop Paul Gallagher said “our world faces today an unprecedented number of challenges on every front.”

“Some have tended to see ecumenical endeavor as a question of church, or as an internal Christian affair in which our unity will be good for the growth or even survival of Christ’s church,” said Gallagher, the Secretary for Relations with States at the Vatican’s Secretariat of State.

“Given all we face today, given the urgency and precariousness of our situation I would argue rather that ecumenical engagement is a moral imperative for all of us who are baptized in the name of the Blessed Trinity,” Gallagher continued. “We must proceed together as the one Body of Christ, not because it will be nice or cozy to do so but because we have to in response to the pressing needs of humanity.”

The archbishop was speaking in a homily at an ecumenical evensong ceremony at Rome’s Oratory of San Francesco Saverio del Caravita for the inauguration of Archbishop Bernard Ntahoturi, the Archbishop of Canterbury’s new personal representative to the Holy See, who also serves as the director of Rome’s Anglican Centre.

Archbishop of Canterbury Justin Welby, head of the global Anglican Communion, was present for the event, during which he formally commissioned Ntahoturi, a Burundi native, into his role.

Gallagher spoke about ecumenical engagement in the context of the recent decades of relationship between the Roman Catholic Church and the Anglican Communion, following the first public meeting between a pope and an Archbishop of Canterbury in 1966.

The Catholic archbishop also pointed to a special connection he shares with Ntahoturi, having served as the Vatican’s apostolic nuncio, or ambassador, to Burundi from 2004-09. He said that while historic relations between Anglicans and Catholics in Africa “have too often been characterized by competition and rivalry” that “in recent these times we have strived to work together whenever possible.”

Gallagher referred to earlier plans for Pope Francis and Welby to visit war-torn South Sudan together. While those plans were postponed in May due to security concerns, the prelate said “the Holy Father and the Archbishop [of Canterbury] both nourish the hope of being able to act together for the benefit for the people of South Sudan.”

Ntahoturi, who is the first French speaker and African to serve in his Rome role, is a former Anglican Archbishop Primate of Burundi and a former chair of the Council of Anglican provinces in Africa. He is known as a prominent peace advocate and was vice chair of the Burundi Truth and Reconciliation Commission.

Rome’s Caravita church is home to an English-language Catholic community led by Jesuit Fr. Keith Pecklers. The community shares an ecumenical covenant with the Anglican Centre, which was founded in 1966 to welcome Anglican pilgrims and build ecumenical relationships in the eternal city.

[Joshua J. McElwee is NCR Vatican correspondent. His email address is jmcelwee@ncronline.org. Follow him on Twitter: @joshjmac. He serves on the pastoral council of Rome’s Caravita community.]