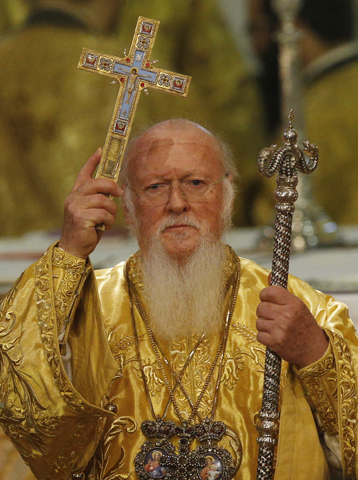 Ecumenical Patriarch Bartholomew of Constantinople delivers a blessing during a 2014 Divine Liturgy attended by Pope Francis in the patriarchal Church of St. George in Istanbul. (CNS/Paul Haring)

When Russia's Orthodox church announced it was pulling out of a major Pan-Orthodox Council earlier this week, it was widely feared the long-anticipated event would have to be called off.

But when the Council's honorary convenor, Ecumenical Patriarch Bartholomew I of Constantinople, arrived at the venue in Crete on June 15, he insisted it would go ahead. "Assisting in this formidable labor of love are countless men and women from around the world -- the Pan-Orthodox secretariat has worked feverishly, laying the groundwork," the Ecumenical Patriarchate confirmed in a statement. "His All-Holiness is sensitive to the particular needs of his brother-hierarchs in the sister-Orthodox churches assembling from far and wide, and ever-mindful of the expectations and aspirations of each faithful member of the Orthodox church. He has called all to unity -- may we respond with charity and generosity."

Plans for the Council, which will debate Orthodox doctrine from June 19-26, as well as ties with Catholics and other Christian churches, were first laid in 1901 by Ecumenical Patriarch Joachim III. Its venue was switched to Kolymbari in Crete this January by the Orthodox Synaxis, or assembly of church leaders, after Russian church leaders objected to its being held at the Ecumenical Patriarchate's see in Turkey.

However, in early June letters to Patriarch Bartholomew, Orthodox churches in Georgia and Bulgaria said they would not now be attending, citing disagreements over the Council's agenda, procedures and working documents.

Meanwhile, the Patriarchate of Antioch, one of nine in the Orthodox world, also pulled out, complaining that a solution had not been found to the Jerusalem Patriarchate's "invasion of its territory."

A fourth church, in Serbia, threatened to withdraw as well, after demanding the Council's postponement. On June 16, its leader, Patriarch Irinej, relented and said his church would now come to Crete. But it would promptly leave, Irinej warned, if "all issues, problems and difference" were not fully accounted for.

Russia's Moscow Patriarchate complained it had not been sufficiently involved in the Council preparations and had tabled "urgent proposals" for a pre-Council meeting to discuss the church withdrawals.

But this was rejected by the Patriarch Bartholomew, who insisted the agenda and documents had been "unanimously approved" by the Synaxis in January. Postponing the Council after so much preparation would compromise the Orthodox church internationally, Bartholomew told the Russians, and inflict "irreparable damage to her authority."

On June 13, miffed by the reprimand, the Russian Orthodox church accused Bartholomew of violating the "principle of pan-Orthodox consensus" and confirmed it too was pulling out.

"We were willing to turn a blind eye to the problems for the sake of peace and unity," the church's foreign relations director, Metropolitan Hilarion Alfeyev, explained in a statement. "We should draw a lesson from this and understand that the voices of churches should not be disregarded. If a church expresses her concern over something, this concern should be resolved."

Patriarch Bartholomew is traditionally recognized as "first among equals" by leaders of the world's 300 million Orthodox Christians, and has 11 autonomous churches, exarchates and archbishoprics under his jurisdiction around the world.

His own patriarchate in Istanbul (the modern name for Constantinople) wields direct authority, however, over just 3.5 million Orthodox Christians in Turkey, Crete, the Aegean Islands and Mount Athos; and while no one disputes his nominal primacy, some Orthodox hierarchs object to how he uses it -- especially in Russia, whose Orthodox church claims the spiritual loyalty of most of the country's 144 million citizens and is by far the largest in the Orthodox world.

The 14 churches expected to participate in the Council, each bringing 24 representatives to Crete, are recognized as full members of the Orthodox communion with equal status, whatever their size and resources.

However, the ancient patriarchates of Constantinople, Alexandria, Antioch and Jerusalem are traditionally seen as first in the canonical order; and all 14 churches are intensely jealous of their authority and independence.

This helps explain the complexity of staging a Pan-Orthodox Council.

Despite the walkouts, public support for the agreed Crete agenda has come from Orthodox leaders in Cyprus, Romania and Albania, as well as from Patriarch Theodore II of Alexandria, who said he hoped dissenting church leaders would not stay away because of "personal sulks," at a time when much of the world faced hunger and conflict.

Numerous doubts have been voiced, however, about the Council's five draft documents, prepared by a special commission in 2014 and 2015. These cover Orthodoxy's mission in the world, the Orthodox diaspora, church autonomy, fasting, marriage and relations with "the rest of the Christian World."

The last, in particular, records how Orthodox churches have "led the way" in "efforts to restore unity between those who believe in Christ."

It also implicitly criticizes the Russian church, which walked out of an International Commission on Theological Dialogue with Catholics at Ravenna in 2007 after disagreements over papal primacy.

Far from contradicting Orthodoxy's "nature and history," the document goes on, ecumenical engagement "represents a consistent expression of the apostolic faith and tradition in a new historical context." Its aim is to "reclaim the lost unity of Christians on the basis of the faith and tradition of the ancient church."

"The Orthodox church acknowledges the historical existence of other Christian churches and confessions that are not in communion with her and believes her affiliation with them should be based on a speedy and objective elucidation of all ecclesiological topics, most especially their general teachings on sacraments, grace, priesthood and apostolic succession," the document stipulates.

"Accordingly, for theological and pastoral reasons, Orthodoxy has viewed in a favorable manner dialogue with various Christian churches and confessions, as well as her participation, in general, in the present-day ecumenical movement."

Yet this has also sparked tense reactions, particularly from the Orthodox church of Greece, which has traditionally resisted all contacts with Catholics and other churches. In late May, Athens newspapers said at least half the bishops nominated to represent the Greek church had refused to participate at the Council.

They said a leading conservative metropolitan, Seraphim Mentzelopoulos of Piraeus, had withdrawn over the ecumenism issue, while Metropolitan Hierotheos Vlachos of Nafpaktos, another delegate, had objected to the description of Catholics and Protestants as "churches."

Although the Vatican has enjoyed friendly ties with the Istanbul-based Ecumenical Patriarch, as well as with several other Orthodox churches, ties with the Russian church have long been tense over accusations of Catholic expansionism in post-communist Russia and Ukraine.

Relations have looked to set to improve since Pope Francis' historic meeting with Patriarch Kirill in Cuba last February.

But anti-Catholic and anti-ecumenical feeling remains strong in Russia.

"This document does not clearly specify that the fullness of the truth exists only in Orthodoxy -- so people start worrying: does that mean we accept fullness and truth can also exist somewhere else, somewhere outside of Orthodoxy?" Fr. Philipp Iliashenko, assistant history faculty dean at Moscow's St. Tikhon Orthodox University, commented on June 15. "Thankfully, owing to the Russian Orthodox church, the Council documents received a wide exposure -- feedback was received, some suggestions made. And what do we hear in return? No comment, no changes."

Most observers concur that tensions over the Council also reflect personal and institutional rivalries between the rich and powerful Russian Orthodox church and much smaller Ecumenical Patriarchate, which enjoys a precarious existence in predominantly Muslim Turkey.

Russian church officials have long objected to Patriarch Bartholomew's use of the title "Ecumenical," and have complained that their church should have extra votes at the Council because of its size and predominance.

Other bilateral disputes could also flare up during the Council, such as over the Romanian church's claim to spiritual jurisdiction over areas claimed by the Serbian and Russian churches, rival claims involving the Orthodox church in Estonia, and recent calls by Ukrainian parliamentarians for an independent Ukrainian Orthodox church.

In an international appeal last week, however, more than a thousand Orthodox theologians and academics urged such disputes to be set aside, and called on disaffected church leaders to stop "jeopardizing" the Council's work. "Legitimate questions" had been raised about the documents, they conceded, while "many issues" facing contemporary Orthodoxy would have to await future discussions.

However, the Council had been "much anticipated and long prepared," the signatories noted, and there should be "no insurmountable difficulties" to convening it, as planned, on June 18.

"Nobody can expect this Council to settle every important question or settle every jurisdictional dispute in 10 days -- but we hope it will begin a healing process and usher in a new era of global conciliarity and unity," the appeal said. "This Holy and Great Council offers the opportunity to begin a new phase of Orthodox witness. The eyes of the whole world are upon the Orthodox church, so we beseech our leaders to hear the Spirit's call to conciliar unity."