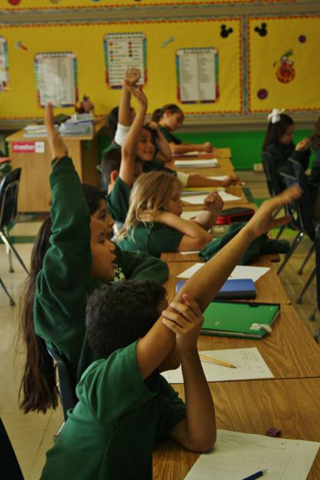 All Saints Catholic School in Richmond, Virginia, nearly closed after the economy crashed. It lost more than half of its enrollment in a two-year period and went on to operate with a deficit for three years in a row while its student population hovered at about 105, at less than half its capacity.

Bishop Francis DiLorenzo, seeing how many school-aged Latinos lived within the borders of the Richmond diocese and how many empty seats schools like All Saints had, spearheaded the launch of the Segura Initiative in 2010. The program removes much of the financial barrier to Catholic school enrollment for Latino students from very low-income Catholic families and has expanded their numbers in 27 of 29 diocesan schools.

Ken Soistman, president of All Saints school, was one of the first principals in the diocese to accept Segura students. And since then he has watched school enrollment steadily creep upward. During the 2013-14, All Saints had 114 students. Last year enrollment jumped to 167, this year it is 188, and next year, Soistman expects 205 students, about 25 percent of whom will be Latino.

"We're back operating in the black -- with a bare-bones budget, but we're also paying back some of our deficit," Soistman said.