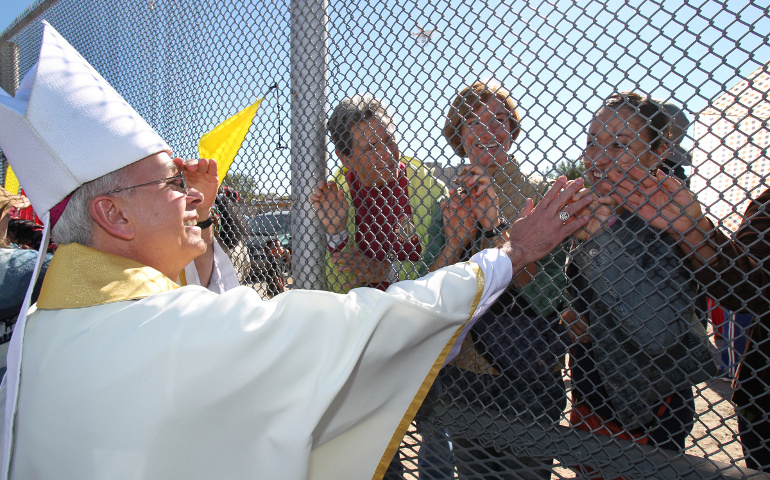 Bishop Mark Seitz of El Paso, Texas, touches the hands of people in Mexico through a border fence following Mass in Sunland Park, N.M., in this 2014 file photo. (CNS/Bob Roller)

Denouncing the "demonization of migrants," hateful rhetoric, the militarization of the border and a system that divides families, Bishop Mark Seitz of El Paso, Texas, called on Catholics to heed the church's teachings to welcome the migrant.

In a July 18 pastoral letter "Sorrow and Mourning Flee Away," on migration and addressed to the "People of God in the Diocese of El Paso," Seitz, who serves a border community near Mexico, said the country's security cannot be used as a "pretext to build walls and shut the door to migrants and refugees."

"God did not create a world lacking room for all at the banquet of life," he wrote.

He said that while some might question his reflections, "I am not substituting politics for the teaching of the church," but as a pastor, his "duty is to the Gospel of Jesus Christ," he wrote. And the Gospel in the Old Testament is clear, he said: "You shall treat the alien who resides with you no differently than the natives born among you."

Seitz also criticized a system that "permits some to detain human beings for profit," while eroding the country's "historic commitment to the refugee and asylum seeker."

In the letter, he shared personal anecdotes. One involves a teenager named Aura he met at a sister parish in Honduras who later decided to make the trip north to escape extreme poverty and violence. She was caught by immigration authorities and ended up in a detention center in El Paso but not before experiencing "serious physical and psychological wounds."

She left Honduras for the U.S. because she had been enslaved by a gang and then ended up being treated like a criminal as she sought refuge in the U.S., the bishop wrote. He also wrote about a devoted Texas parishioner named Rosa, who in addition to long hours volunteering, works long hours caring for people with disabilities as well as cleaning houses to raise her family alone after her husband was deported.

"Aura is your neighbor! Aura is your sister!" Seitz wrote, and when it comes to Rosa, he asked: "Who can deny that our community would be diminished without the faith, hard work and contributions of Rosa and her family?"

He said moments of encounter with such migrant brothers and sisters can provide opportunities for conversion but he lamented that instead, people keep going about their old ways of seeing the world, with indifference, including an indifference toward God.

"This growing indifference toward God seems to exist side by side with a growing coldness toward the poor and suffering, as if they did not exist," he wrote.

Seitz said that even though the immigration system is broken and has not been fixed in large part because "elected leaders have not yet mustered the moral courage to enact permanent, comprehensive immigration reform," migrants should not be the ones paying the price.

"Still, migrants are treated, as Pope Francis says, as 'pawns on the chessboard of humanity.' Their labor and talents are exploited but they are denied the protections of the law and are scapegoated for our social and economic ills," he wrote.

He praised the work of border communities in welcoming the stranger, and says places such as his diocese, are filled with "heroic individuals, families, pastors, religious, parishes and institutions that spend themselves in service to migrants and refugees" feeling conflict, hunger and persecution. They also advocate for "just laws and against the militarization of our border," he wrote.

As the pastor of a border community, he said, he asks God to help him console, denounce injustice and announce redemption.

"I am pastor of a diocese divided by walls and checkpoints that separate individuals from loved ones. I am bishop of a flock frightened by the flashing lights of police cars in the rearview mirror, who wonder if this family outing or that drive home from work will be the last," he wrote. "I am (a) spiritual father to thousands of Border Patrol and ICE agents, who put their lives on the line to stem the flow of weapons and drugs and those who carry them.

"Many agents are troubled in conscience by divisive political rhetoric and new edicts coming from Washington, D.C.," Seitz added. "I am a citizen of a community where children worry whether mom or dad will be there when they return from school."

Migrants, he wrote, are not just seeking a better life, "but life itself."

He asked for compassion and solidarity with migrants and says the church "must not remain on the sidelines in the fight for justice."

To migrant brothers and sisters, he said: "We stand with you!"

"As your bishop, I pledge my commitment to stand with you in this time of anxiety and fear. I promise to hear you, celebrate with you, break bread with you, pray with you and weep with you," he wrote. "You possess a dignity that no earthly law or court can take away. Your families enrich our community and strengthen our parishes. Your perseverance, dedication and enthusiasm for a better future renew our hope."

Seitz announced he is establishing the Sonador Fund to offer financial assistance to children of migrant families so they can attend Catholic schools in the El Paso Diocese.

The Catholic Church, he wrote, considers itself a mother to all and therefore no human being can be illegal in her eyes, he wrote.  He encouraged parishes to become places of prayer, study and dialogue on the issue, "where Catholics can get involved in the work of building a more humane border through education and advocacy."

"We must continue to denounce the evil of family separation, the militarization of our border communities, for-profit immigrant detention, the mistreatment of asylum seekers and the disparagement of our Muslim brothers and sisters," he said.

He encouraged others to learn from the work and culture of border communities.

"Our border is beautiful, rich in history and culture, faith and natural wonder. This is a place where people of many cultures, languages and nationalities coexist and thrive," Seitz said.

"I invite young people, volunteers, attorneys and other professionals to spend time with us in service opportunities available through our many church and community organizations," he concluded. "The voice of border communities must be taken into consideration in the shaping of border enforcement policies and in debates on immigration reform. Let us reject a mindset of hostility and work together in generous cooperation for the common good."