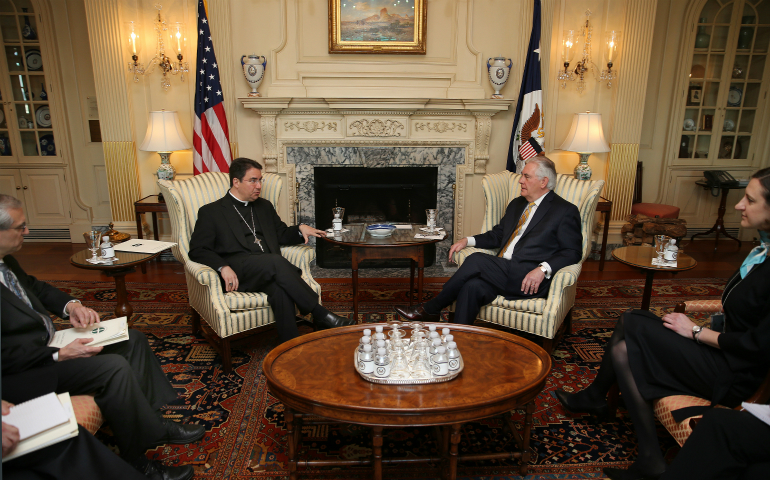 Bishop Oscar Cantu of Las Cruces, N.M., gestures during a March 23 meeting with U.S. Secretary of State Rex Tillerson at the State Department in Washington. Partially obscured at left is Stephen Colecchi, director of the Office of International Justice and Peace at the U.S. Conference of Catholic Bishops. (CNS photo/Bob Roller)

The chairman of the U.S. bishops' Committee on International Justice and Peace called on Secretary of State Rex Tillerson to undertake diplomatic efforts to ensure that democratic elections are carried out by the end of the year to avoid continued strife and the possible outbreak of civil war.

In a May 1 letter to Tillerson, Bishop Oscar Cantu of Las Cruces, the committee chairman, shared the concern of the Congolese Catholic bishops' conference that an agreement between the country's government and opposition parties governing a presidential election in 2017 was not being followed.

The Congolese bishops voiced their concern over rising tension in Congo in an April 20 statement after President Joseph Kabila unilaterally nominated Bruno Tshibala as prime minister over the objection of opposition parties.

Tshibala, a former member of the largest opposition party, was named prime minister of a new transitional government established to organize a presidential election by the end of the year after Kabila refused to step down when his second term in office expired in December.

Kabila has said, however, that the government needs more time to overcome the massive logistic and financial challenges to holding an election. The opposition maintains that Kabila is trying to cling to power beyond his constitutional mandate.

Demonstrations in December resulted in at least 40 deaths at the hands of government forces.

The Catholic bishops' conference helped negotiate Dec. 31 what has been called the St. Sylvester Accord. The agreement called for elections in 2017, after which Kabila would step down. Kabila's appointment of Tshibala violates that agreement, the bishops said.

Cantu said Congo could resolve its electoral crisis this year by holding free and fair elections that would lead to the first peaceful transfer of power in the country's 57-year history or it could descend into autocracy, riots or perhaps civil war.

U.S. diplomacy could head off violence and instability, the committee chairman said.

The Congolese bishops "used their moral authority" to become involved in the talks to create conditions of "peaceful, constructive dialogue to resolve the crisis," Cantu explained in his letter.

"It's not the church's place to take on a political role by applying pressure on the political parties to resolve the crisis and protect democracy and the common good. The Congolese people need the international community, the United Nations and the regional countries to work together to convince the Congolese government to prepare inclusive, free and fair elections, as called for by the constitution to allow civil society and the common good for the country to flourish," Cantu said.

Cantu urged Tillerson to "deploy the diplomatic and development resources at your discretion to ensure that the government honors its constitution and the democratic principles on which it is built."

"An investment in diplomacy and promotion of good governance will save many millions of dollars in humanitarian assistance and peacekeeping expenditures in the long run," Cantu wrote. "It will also rescue millions of people from needless suffering."