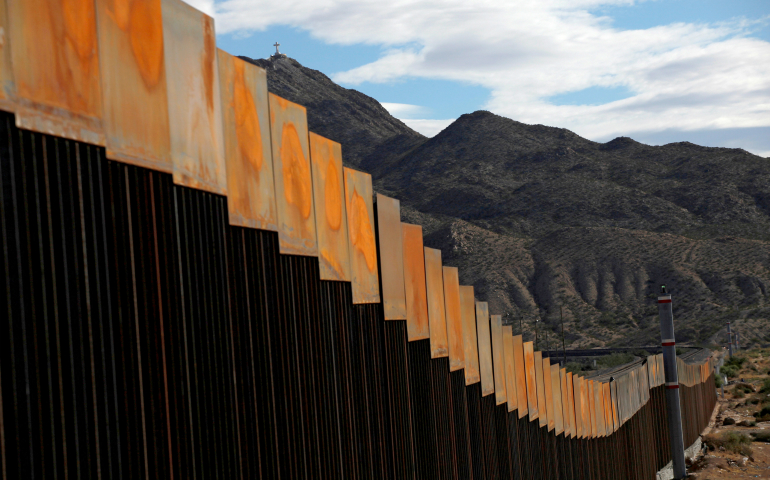 A photo taken in 2016 shows a newly built section of the U.S.-Mexico border wall at Sunland Park, N.M., opposite the Mexican border city of Ciudad Juarez, Mexico. President Donald Trump enacted two executive memorandums to deal with security, including one that calls for construction of a wall along the U.S.-Mexico border. (CNS photo/Jose Luis Gonzalez, Reuters)

The chairman of the U.S. bishops' Committee on Migration criticized President Donald Trump's executive memorandum to construct a wall along the U.S.-Mexico border, saying it would "put immigrant lives needlessly in harm's way."

Bishop Joe S. Vasquez of Austin, Texas, chairman of the U.S. bishops' Committee on Migration, also criticized Trump's memorandum on a surge in immigrant detention and deportation forces, saying it would "tear families apart and spark fear and panic in communities."

Trump signed the two executive memorandums on national security Jan. 25 during a visit to the Department of Homeland Security.

Earlier, White House press secretary Sean Spicer said the wall, a cornerstone of Trump's election campaign, would "stem the flow of drugs, crime and illegal immigration" along the southern border. He also said Trump's top priority was the nation's security.

But hours later, Vasquez issued a statement saying that construction of the wall would "make migrants, especially vulnerable women and children, more susceptible to traffickers and smugglers. Additionally, the construction of such a wall destabilizes the many vibrant and beautifully interconnected communities that live peacefully along the border.

"Instead of building walls, at this time, my brother bishops and I will continue to follow the example of Pope Francis. We will 'look to build bridges between people, bridges that allow us to break down the walls of exclusion and exploitation.'"

During a February 2016 visit to Mexico, Pope Francis traveled to the U.S. border at Ciudad Juarez and pleaded for the plight of immigrants. He said those who refuse to offer safe shelter and passage were bringing about dishonor and self-destruction as their hearts hardened and they "lost their sensitivity to pain."

Vasquez said the bishops respected the government's right to control its borders and to ensure the safety of all Americans, but said, "We do not believe that a large-scale escalation of immigrant detention and intensive increased use of enforcement in immigrant communities is the way to achieve those goals. Instead, we remain firm in our commitment to comprehensive, compassionate, and common-sense reform."

He said the new policies would "make it much more difficult for the vulnerable to access protection in our country. Every day my brother bishops and I witness the harmful effects of immigrant detention in our ministries. We experience the pain of severed families that struggle to maintain a semblance of normal family life. We see traumatized children in our schools and in our churches. The policies announced today will only further upend immigrant families."

"We will continue to support and stand in solidarity with immigrant families. We remind our communities and our nation that these families have intrinsic value as children of God. And to all those impacted by today's decision, we are here to walk with you and accompany you on this journey," Vasquez said.

At the Jan. 25 White House briefing, Spicer reiterated that Mexico would end up paying for construction of the wall. He said Trump would work with Congress on finding money to pay for the construction, noting, "there are a lot of funding mechanisms that can be used."

"You have American people out there working" and their tax funds are sent to places that do not enforce the law, he said.

The executive memorandums did not address the issue of DACA, the Deferred Action for Childhood Arrivals program, nor did they discuss emigration from the Middle East, which Spicer said would be addressed later in the week.

In 2006, President George W. Bush signed the Secure Fence Act, which authorized several hundred miles of fencing along the 2,000-mile U.S. frontier with Mexico. The Associated Press reported that legislation led to the construction of about 700 miles of various kinds of fencing designed to block both vehicles and pedestrians, primarily in Texas, New Mexico, Arizona and California. It said the final sections were completed after President Barack Obama took office in 2009.

AP reported that a 1970 treaty with Mexico requires that structures along the border cannot disrupt the flow of rivers that define the U.S.-Mexican border along Texas and 24 miles in Arizona.

The PICO National Network, the largest network of congregations and faith-based groups in the country, including Catholics, challenged the executive memorandum on sanctuary cities.

"Retaliating against local communities because they refuse to follow immoral policies is part of an emerging pattern of President Trump of not only bullying people who dare to disagree with him, but isolating and further marginalizing people who are different than him," said Eddie Carmona, campaign director for PICO National Network's LA RED campaign. "Such behavior is inconsistent with the long-held notion that America was a place of opportunity for all."

"When Nuns on the Bus visited the U.S.-Mexico border in 2014, we walked along the wall and listened to the stories of communities that have been torn apart for decades. That is the reality experienced by border communities: The wall is there and it affects the daily life and commerce of the people.

"Federal appropriations for border security have grown to $3.8 billion in FY2015, from $263 million in FY1990, and fencing exists for hundreds of miles along our southern border," she said in a statement.