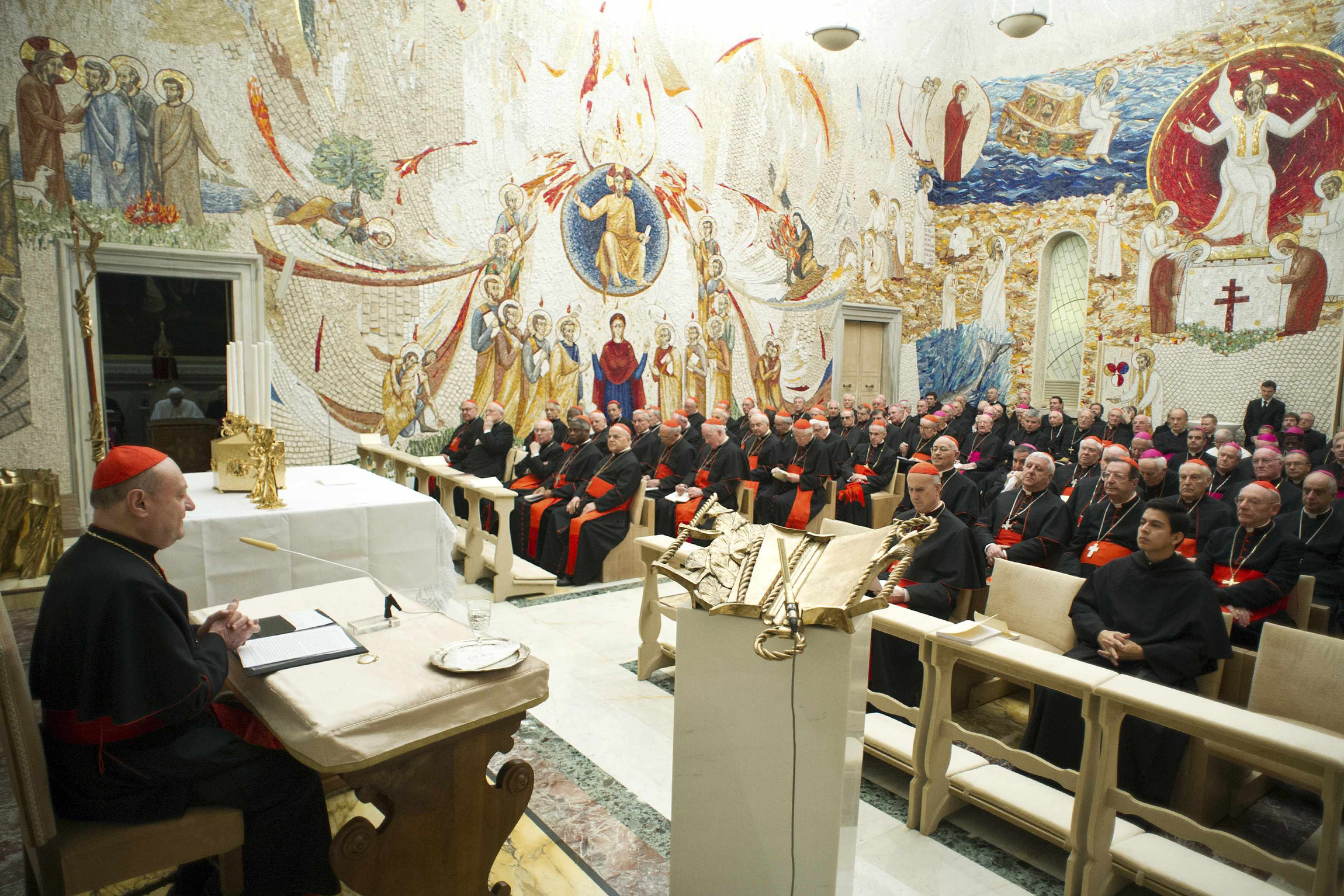 Cardinal Gianfranco Ravasi, president of the Pontifical Council for Culture, addresses members of the Roman Curia during the closing day of a spiritual retreat with Pope Benedict XVI at the Vatican Feb. 23. (CNS photo/L'Osservatore Romano via Reuters)

While pundits and ecclesiastical junkies continue to speculate when and how Pope Francis will -- or even if he can -- reform the Roman Curia, he has already done it.

It has not been reported because the busy chroniclers of Vatican life are listening for the shuffling sounds that bureaucrats make as, like thoroughbreds pawing at the starting gate, they plan how to jockey into position, bumping other contenders if necessary, to finish in the money. Or at least to bet on the winner of the Kentucky Derby of Vatican preferment that is run whenever a new pope assumes office.

Careful observers can also hear the sounds of Vatican officials noisily aligning themselves, they hope, with the new pope’s theology. You can also hear them cleaning out their files, and practicing the look of innocent by-standers -- unaware, as they stand through the long chill night ready to abandon their cardinal-protector should he not survive the first cut, that they are the closest they will ever be to St. Peter, with each prepared to re-enact the latter’s denial that he even knew his master.

Francis, however, aside from making the curial heads nervous by only reappointing them temporarily to their positions, has accomplished the reform of the bureaucracy of the church that is based, according to the American Heritage Dictionary, on “the ten primitive subdivisions of a tribe in early Rome,” later refined into “the ensemble of central administrative and governmental services in imperial Rome.”

The origin of the word “curia” describes the career clerics who have peopled the ecclesiastical offices: It comes from “co-vir” that means “men together,” and reveals the masculine dynamic that has infused the bureaucracy that is defined as “any administration in which the need to follow complex procedures impedes effective action.”

Wherever you find “men together” -- writing the rules, as at exclusive golf or other men’s clubs, businesses, and lodges where they wear elaborate robes and funny hats -- women are kept completely outside if possible and when grudgingly admitted, to highly restricted areas or token status.

Does the howl you can hear from men, afraid that women will want to enter the locker room and see them as God does, resemble the last anguished cries from Pope Emeritus Benedict XVI’s Curia, who apparently fearing that real women would see them, or through them, free of their finery in their locker room, initiated investigations to force American women into submission again?

Men together in the Curia have bet everything on the centripetal forces of clericalism that forever seek the center and cluster around it as their hub of power. Playing their game at the center, where the doors to the locker room are sealed off like the Sistine Chapel during a conclave, means, as pundits speculate, that a reforming pope would have to take the cardinals and their congregations on one by one. That, however, resembles slaying a starfish by cutting it into pieces; you only end up with ten regenerating starfish.

So Francis has reformed the Curia and incidentally completed the Copernican Revolution in the church not by changing the cardinals, but by changing the center. He reveals himself as a Space/Information Age pope by choosing not to live as a monarch in a palace in the very center of what the Curia identifies as the still point in their universe of power. He had told the cardinals at their pre-conclave gatherings that the church had to move away from “theological
narcissism” and focus its energies on the “peripheries.”

As Wall Street Journal columnist Peggy Noonan recently noted, “He speaks of the centrality of Christ to the Church’s efforts. But he often spoke [in his first week] of ‘the edges’ of things: The power of a good priest ‘overflows down to the edges.’

“He even spoke of the edge of Christ’s cloak,” she wrote, before quoting a papal tweet: “Being with Jesus means that we go out from ourselves, and from living a tired and habitual faith.”

Francis has reformed the Curia by taking away the center, by taking a step (noted by few observers) whose centrifugal effects on the church have already opened fissures in the earth beneath the feet of careerist clerics who worked all their lives to get to the center only to find out it isn’t there anymore.

The reform will come as professional clerics seek places of service and survival in a church that, under the new pope, finds that its Catholicism is waxing while its Romanism is waning. You may suddenly find cardinals, bishops and flocks of monsignors from the old center moving into hotels, taking the bus or washing the feet of prisoners and passersby.

Anything that may help them regain their balance in a church that has literally been sent into orbit by a pope who responds to the world of the powerless beyond Rome, rather than to the worldliness of the powerful inside Rome.