Kevin Doyle, 56, is the only person I can think of who was glad to lose his job. This was not because he didn't value what he was doing or because he wasn't respected for his expert handling of an important profession. When New York state abolished the death penalty, Doyle, the capital defender, closed his office and moved on. 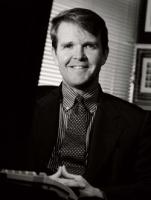 Sr. Camille: Please tell us what you were saying goodbye to.

Doyle: The Capital Defender Office worked because very talented people with very varied backgrounds and temperaments, some lawyers and some not, were willing to put aside differences and collaborate to save lives. We loved our clients -- loved them unconditionally, without pretending they had not, in most instances, caused some awful harm, suffering and grief.

Was there any particular case that satisfied your desire for justice?

I think mercy is the better part of justice, so every case where we saved a life -- which was ultimately each case we handled -- was very satisfying. Of course, total satisfaction could only come with going back in time and preventing the killing that gave rise to the capital prosecution or the childhood that had left our client so damaged as a human being. But that is not how the world works.

What in your upbringing (family, education, faith and influences) brought you to that position?

My parents were people of great faith who believed one's faith entailed more than Mass on Sunday. They were prayerful Catholics you would want to clone. They were part of The Christian Family Movement, something that nurtured their pre-existing sympathies in the area of social and racial justice. (That my middle name is Martin after Martin de Porres says something, I guess.) These values played out in the lives of all their children, four sons and two daughters.

My dad was a police officer. Some folks therefore think it is odd that I went into capital defense. But his experiences left me with a deep sense of both how important and how imperfect our criminal justice system is. And he, as well as my mom, really embraced the 'seamless garment' before the term was used to describe a consistent pro-life ethic.

What work did you embrace after your office closed?

I prosecute lawyers who violate their ethical obligations. I have always thought it important to police our own. I'm now very lucky to be a part of that process.

Where did you grow up and what schools did you attend?

The Bronx and Rockland County. The Dominican Sisters endured me for eight years and the Irish Christian Brothers for four. The Jesuits at Fordham, where I majored in philosophy, put up with me for another four.

I am grateful to all of these religious orders, but above all to the Jesuits. They were demanding but patient and imparted a healthy skepticism while guarding against cynicism. One of my closest friends to this day is a Jesuit whose courses were among the best I took.

Please tell us about your siblings.

Some siblings have lived out my parents' values more on the societal plane and some more on the family plane. Each is a gem -- and pretty funny.

We are close and all learn from each other. My sisters both have MS. I am in awe of the grace with which each handles it.

How did you meet your wife?

The former and present Mary Sullivan was in the University of Virginia's graduate nursing program when I was in the law school. Her housemate was my section mate. The first year we knew each other, we mixed like oil and water -- or gasoline and fire. The next year, we started dating. We were married within 12 months after that. Go figure.

What is your favorite scripture passage?

The one about fussing over the splinter in your neighbor's eye while ignoring the timber in your own.

Does it have an impact on the way you live your life?

It makes me less judgmental. Every time I do think I spot a fault in someone else, an accusatory mirror drops into place and lets me know how some variation of the fault exists in me. Ouch!

We began by recalling how, as capital defender, you worked to save the lives on people accused of heinous crimes. Over the past several years, you've been working to save your own life from the dangers of cancer. Would you say something about that effort and what you've learned from it?

The most important thing I have learned is how blessed the Sullivan-Doyles are as a family. My bride and my three children have been through some harrowing stuff. But none of us ever felt lost or hopeless.

The other thing I have learned is just how heroic my wife's eight-year stint as a pediatric nurse practitioner at Memorial Sloan-Kettering Cancer Center in New York was. I was always proud of her. But once I became a patient, I would shamelessly refer to her history in order to curry favor. Invariably, my caregivers, who themselves did oncology 24/7, would practically genuflect when they heard Mary had worked with kids.

How do you pray?

Frequently. Sometimes free-form and sometimes the prayers I was taught over 50 years ago.

I pray a great deal with saints. Damien or Martin de Porres, for instance. Damien was a great help when I was dealing with graft-vs-host nonsense after my cord stem cell transplant.

Some of my saints do not have official status (yet). Some I have learned about from Robert Ellsberg's All Saints. (What a book!) Others I have learned about on my own. Christoph Probst was a young husband and father executed by the Nazis for publicizing Hitler's atrocities. He converted to Catholicism right before his death. (Something worth pondering by those who buy into the Hitler's pope nonsense.)

Pretty Jesus-centered. I have given short shrift to the Holy Spirit, I fear.

Obviously, scripture and reason call us to an appreciation of God as Mother, but I am slow on this. I guess because Mary, to whom I pray, takes up a lot of territory in my spiritual imagination.t

What about your faith is most meaningful to you?

That God suffers with us. A Jesuit friend who was a prison chaplain once told me that an inmate had asked him where Jesus was when the inmate was being raped. My friend told him Jesus was right beside him being raped. That pretty much says it all. I have great respect for the faith of those who do not believe in the Incarnation. My faith would not survive without the knowledge that God became human and chose to suffer for us and with us.

Do you see it in action?

Yes. Once God is a co-sufferer, you cannot put God in the dock (to borrow from C.S. Lewis). You have to accept your job as alleviating suffering.

Who most influenced your belief system? Please explain.

My folks, my siblings, my wife, my children, my friends, every sister, brother and priest who taught me. The community of our current parish St. Ann's in Nyack, N.Y.

What does Christianity demand of you?

More than I give. Fortunately, God is merciful.

The spiritual, moral and intellectual home it has always provided me. A sacrament-centered community of faith.

Among the laity, those who think life is sacred only from conception to birth and their counterparts who think hundreds of thousands of abortions a year represent an unfortunate inevitability.

Among church leaders, the pitting of reason against faith. I recall a Chesterton story in which Fr. Brown spotted an imposter priest through the imposter's derision of reason. That derision inheres in much of the rhetoric you hear from bishops and their intellectual allies today. For instance, the stance against even exploring the ordination of women is a joke.

Only very recently have our leaders acknowledged injustices against women over time in the church. With this realization, we should be asking whether the exclusion of women over the centuries has reflected Christ's will or a twisting of that will born of deep, (objectively) sinful prejudices. Instead, Rome has rendered the question beyond discussion. You don't know to laugh or to cry.

Is there anything you would change?

Yes, I would figure out a way to ensure that my contributions as a parishioner in the New York Archdiocese do not go to pay for George Weigel's partisan, polarizing, specious columns run by Catholic New York.

What causes you sorrow?

The degree to which various camps in our church have hunkered down in their bunkers, determined to lock out whatever does not reinforce their pre-existing beliefs.

What causes you joy?

I happened into my old Westside parish Blessed Sacrament a few weeks ago. Our children were all baptized there. We used to serve in its soup kitchen.

I was moved to find that the great pastor there -- Msgr. Robert O'Connor -- had kept his gorgeous church a place where the destitute could find rest.

Catholic friends, reform-minded and tradition-minded, who put aside their own theological and political prejudices and work toward finding Christ's truth.

What do you want from our faith for your children?

A church that strikes the right balance between continuity and change. A church that understands herself as the best expression of Christ's truth but appreciates she can learn from elsewhere.

How often people mistake my wife for the Elizabeth McGovern character on "Downton Abbey."

Since his conversation with Sr. Camille, Doyle was re-admitted to Sloan-Kettering with a recurrence of his lymphoma. He remains optimistic about his future treatment.

For Catholic Worker, life-giving work is a form of prayer

Jean Kelly learned the simplicity of unconditional love from her parents