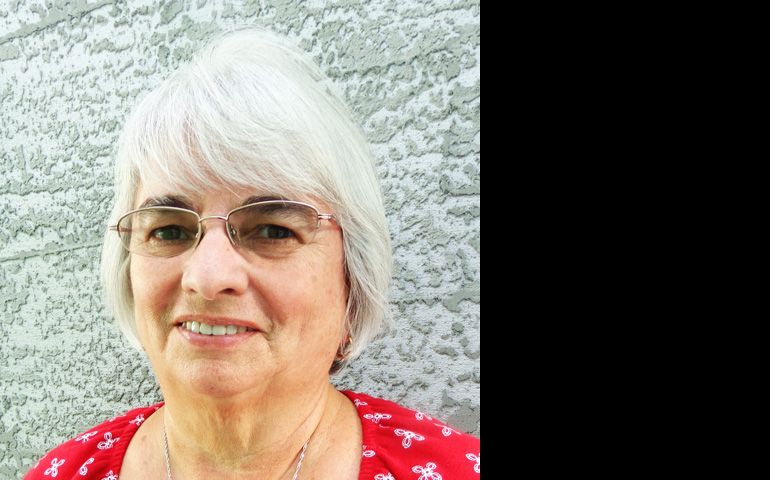 Alicia Zapata
Age: 63
Who is she: Religious Sister of Mercy involved in migrant farmworker ministry
Lives in: Auburndale, Fla.

Sister Camille: Alicia, many New Yorkers relocate to Florida to enjoy retirement, or the warmth, or the slower pace of living.  What drew you from the home in which you grew up and our community in Brooklyn to the Sunshine State?

Zapata: As a novice I spent the last six months of my novitiate and the first six months in first profession in Panama, Central America. On my trip home for first vows I stopped in Florida to visit a friend, Sr. Pearl McGivney. I went with her to visit the farmworker families in the area. At one home there were two little boys playing outside. They had the base of a car jack and were playing with a live mouse. When it came time for me to decide on a ministry, I knew that the farmworkers in Florida were as impoverished as the people I met in Panama.

In my youth I was not thinking about a slower pace of life nor sunshine but instead how I could be present to the most marginalized population in this country. My intent has been to walk side by side with those in most need.

What year did that happen?

I arrived in Florida in September 1984, 10 years after having entered the community.

Did you go there alone?

What ministry were you engaged in before you moved south?

My last ministry in New York was in St. Gerard Magella in a program run by the public school system. The public school system had a grant for children in kindergarten, first and second grades where they spoke a language other than English at home. There were a number of children in St. Gerard whose parents only spoke Spanish. I was in the school in the morning, and I had special class with the children then in the afternoon. I went to the homes of the children and taught the mothers what the children were learning. This was so that the mothers could help the children at home in Spanish. What the children needed to learn was the skill that would be interpreted in the child's mind to English as the child became more proficient in English. This was a two-year grant, and once my commitment to that program was over I came to Florida.

My first ministry in New York after returning from a year in Panama, Central America, was in St. Barbara parish in Bushwick, Brooklyn. That was the summer of the riots in Brooklyn, and when I boarded the plane in Miami to New York someone had left a Daily News paper on the seat. I picked it up and opened to the center fold and there was St. Barbara church big and bold in the middle of the paper with the caption 'our dying neighborhood'. I did not know what I was getting myself into, but when I arrived at St. Barbara I met a vibrant people who lived their resilience in the midst of overwhelming destruction. I had a wonderful four years there in charge of religious education.

For the past year I've live with a Sister of Mercy from the Northeast community, May (Mary) Cronin. It so happens that we were both in Latin America at the same time and so I knew her name but did not meet her until she came to visit me five years ago. May was looking for her next step. She was reelected in New Hampshire and came in 2014 when her term was over. We live in a small house that is attached to the office. May and I have been able to create a community where we pray together, have meaningful conversations and are a support for each other. I am very grateful for her presence here not just for myself but for the community at large.

We have an open house that when necessary is used by office staff.  We are limited in space in the office and often need a place where the person in need of service welcomes a place of privacy.

How do you stay connected to the Mercy community?

In my first years in Florida when the migrants traveled on the migrant stream I would return to New York and volunteer at Watermill. I would stay to celebrate jubilee and the feast day of Our Lady of Mercy. I have always been available to serve the community both on the local level and the institute level. I started interpreting for our sisters in Panama when we had general meetings and continue to be available to the Institute for interpreting. I also keep up with friends within the community. When I go north I make it a point to get together with my friends. It is important for me to maintain the relationships in community.

Please say something about the Florida-Ohio journeys.

During the late 1980's we traveled with the farm workers from Florida to Ohio during the summer harvest. The purpose was to organize the workers to create a union where the workers would have living wages and sanitary living and work conditions.

What are the needs you face?

The needs are many and basic. Local churches collect food for our food bank, which always needs to be replenished. There are many single-mother families who can't make ends meet. Housing is often sub-standard with little to no furniture. The children are greatly challenged in the school system and are often not successful due to not being in the same school for the entire year.

How are migrants treated?

The migrant people continue to be the marginalized population in the country. The work is seasonal, poorly paid and moving from farm to farm is disruptive of family life. The migrants are often ignored and abused by the more dominate community.

How do the children of migrant workers fare?

It is an extremely hard life for the children. They are often in at least three different schools in a year. Since schools begin at different times in different states, they miss continuity in learning. We know children need to be read to in the early years, and when there are no books in the home the children miss out on that basic help of hearing how sentences are read. It makes learning to read more challenging.

There are those who want to say that the migrant worker who come from other countries take away American jobs, but if the migrant workers were not here the fruit and vegetables would not be harvested. The anti-immigrant sentiment that is perpetrated by those who are very vocal but poorly informed creates an environment of fear. The 'Trumps' of this nation who think they can say any untrue stupid statement without justification or proof increase the physical danger for people who are here to work and raise their families. Mexicans (which in 'the Trumps' head is the name for all Hispanics) are not rapists and murderers -- and to make such an outlandish statement is hurtful to our community as a whole.

What have you learned from the people you serve?

There is an incredible resilience in the people. They work from dawn to dusk in the worse conditions. They continually remind me that the goal is what matters. To feed, house, cloth and educate the family is what is important and the grueling work is the means to that end.

Please describe your own childhood.

I am the youngest of eight children and the only one born on the main land. I went to St. Patrick School on Kent Avenue, Brooklyn; Bishop McDonnell High School and Brooklyn College.

What are the family values that affected your life choices?

Strong faith, generosity, and family unity were part of our life.

Did you have role models?

There are still sisters who are my role models.

My image of the Holy One/the Devine is one beyond anything our minds can conjure and bigger than we can ever hope to comprehend. I believe that the Holy One lives within and among all of us without any human properties.

What do you think God is asking of you?

I believe that I'm being urged by the Holy One from within to become my full self following my gifts where ever they may lead.

Every morning I do contemplative sitting for 30 minutes. May and I share time together both in contemplation and in sharing.

What can you say about the faith of the worker families?

Since the majority of the workers are from Mexico, they have a great devotion to Our Lady of Guadalupe. The people have a profound faith that is expressed in popular devotions. It is that faith that has sustained them through all the difficulties they left in their homeland and the difficulty they encounter in this country. I believe that a less faithful people would not be able to sustain all the hardships.

Are they treated justly?

The farmworkers are mostly not treated justly. There is always the exception to the rule but I find when an employer shows the smallest amount of concern for the worker it is highly appreciated by the worker.

What would you like to see done about what is hurtful to them?

The chemicals that are used by the industry cause great harm to the worker's health. I would like to see that those chemicals are not used while the people are in the grove and that they have the medical attention they need.

People | Sr. Alicia Zapata is continually reminded by the farmworkers she serves that the goal is what matters