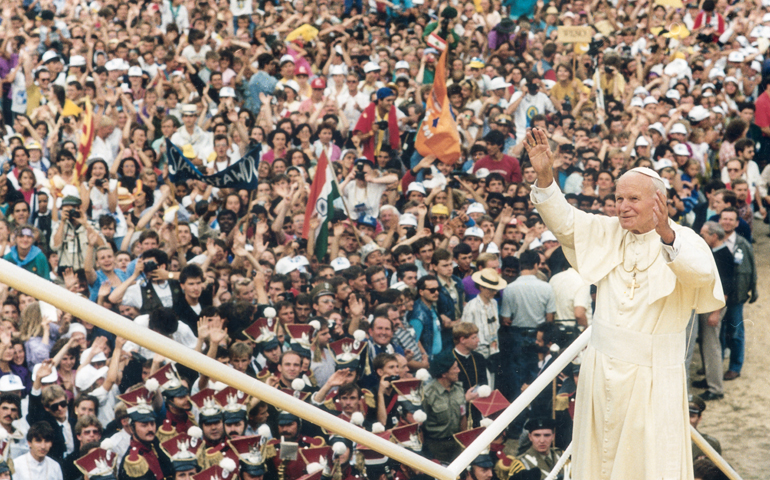 George Weigel, in his latest column, expresses his disappointment in the preparatory document for the upcoming Synod of Bishops on Young People, Faith and Vocational Discernment, slated to be held next year. But, his disappointment points to a deeper area of concern, the degree to which the cult of St. Pope John Paul II has become a kind of cover for opposition to Pope Francis.

Weigel regrets that the document traffics in "sociologese" rather than sticking with the rich, biblical imagery at the text's start. The document wanders "aimlessly through prolix discussions of 'A Rapidly Changing World,' 'New Generations,' 'Young People and Choices,' etc. etc," he complains. I read those sections of the document and I found them more or less concise surveys of the sociological literature, but Catholic neo-cons like Weigel have never much appreciated sociology. For starters, sociology revealed that while Pope John Paul II was reigning, the pews were emptying and the number of "nones" was steadily increasing in these United States, a fact that Weigel has continually ignored.

And it is the absence of any citation to John Paul II that has Weigel irked. "It's also noteworthy, if strange, that the preparatory document comprehensively ignores the contemporary saint who was a powerful magnet for young people during his twenty-six-year pontificate, John Paul II," he writes. "But surely there is something for the world Church of the twenty-first century to learn from that experience."

Let me stipulate that St. Pope John Paul II did many wonderful things, especially his visits to poor countries in the developing world that most of us would never dream of going to. Some of his encyclicals were masterful. I am a big fan of the encyclical on Catholic education, Ex Corde Ecclesiae, although those who usually cite that document tend to distort it, highlighting only those parts that confirm their prejudices and ignoring the nuances and balance of the whole. As I wrote in December in the first of my three-part series on the opposition to Francis, it is not simply that some of John Paul II's biggest fans inflated the significance of his pontificate, it is that they continually interpreted him in ways that reduced his complexity, trying to make him appear like an American subscriber to First Things.

And, in this latest essay, Weigel is at it again. In response to the question why young people liked John Paul II so much, Weigel writes: "The first [reason] is that John Paul II transparently believed and lived what he proposed." I did not know Bl. Pope Paul VI and I have never spent time with Pope Emeritus Benedict XVI. But, could this not be said of them too? Does not Pope Francis transparently believe and live what he proposes?

His second response to the question of John Paul II's popularity with the young is equally strange. "Then there was his refusal to play the Pander Bear with a generation long accustomed to being told how amazing it was," Weigel writes. "He held up a higher standard, summoning the young to risk the lifelong adventure of heroic virtue." To be clear: Anyone who survived the Nazi occupation of Poland is a hero. John Paul's story was indeed compelling. And he, as I suppose all recent popes, was virtuous, heroically so. But, I also suspect he would never adopt the kind of condescending tone Weigel does. I suspect John Paul II really did find young people amazing. I share Weigel's apparent distaste for the cult of self-esteem, but I suspect John Paul II, like me, understood that problem with the cult of self-esteem to be a small concern for a sliver of the population, namely, middle and upper-middle class Westerners.

Weigel then sets forth the questions he thinks should concern the synod. "The first involves All-In Catholicism vs. Catholic Lite," repeating a judgmental meme of his that is especially obnoxious and equally revealing. "Why are the growing youth movements in the Church those that have embraced the symphony of Catholic truth in full? How do those movements create vibrant microcultures in which young people grow in their relationship to Jesus Christ and are formed as missionary disciples, offering healing to the battlefield casualties of the post-modern world? How does the Church summon young people to be countercultural Catholics, precisely for the sake of converting the cultures in which they find themselves?"

Weigel is not specific about which youth movements he means. I would be thrilled if the kids at FOCUS, the university fellowship for Catholic college students, really embraced "the symphony of Catholic truth in full" and were as suspicious of capitalism as they are enthusiastic about the "Theology of the Body." I am all for building "microcultures," although Weigel should admit that the emphasis is on the "micro," but we have an obligation to engage the wider culture too, do we not? As for being countercultural Catholics, in this highly commercialized, materialistic, sexualized culture, the fixation on pelvic theology so common in some of these groups only meets part of the need. The Catholic Worker Movement is countercultural. Joining a labor union would be countercultural.

As the keeper of the John Paul II flame, Weigel is permitted to look back to his hero for inspiration. The whole country of Poland is allowed to think that Papa Wojtyla was the only pope who mattered for a hundred years. Every saint has a cult of some sort. But, to bring up John Paul II in the context of criticizing a forthcoming synod organized by Pope Francis is ludicrous: Whatever his strengths, John Paul II turned the synods of bishops into rote, stale affairs. In the context of a synod about young people, it seems to me, from the young people whom I encounter, Francis is the most compelling figure on the public stage precisely because of his insistent highlighting of Catholic social teaching, teaching that John Paul II also celebrated but which Weigel has spent a career distorting.

Citing John Paul II to criticize Francis is also potentially pernicious. To be clear, Weigel is not Cardinal Raymond Burke, and he keeps his distance from the LifeSiteNews crowd. But, Weigel knows as well as anyone that there is one pope at a time, that the church moves with and under Peter, and that if Francis is not Peter, than John Paul II was not Peter either. Whenever I hear a priest describe himself as "a John Paul II priest" I find it doesn't take long for the criticisms of Francis to start. Mind you, it would be foolish to think people with different personalities and intellectual habits would not gravitate towards different religious leaders, including popes. I prefer chocolate to vanilla ice cream. But, I worry that a healthy cult of St. John Paul II is being prevented from blossoming because an unhealthy cult is taking root, a way of masking opposition to Francis under the guise of devotion to John Paul II. Bishops are well advised to be on guard.