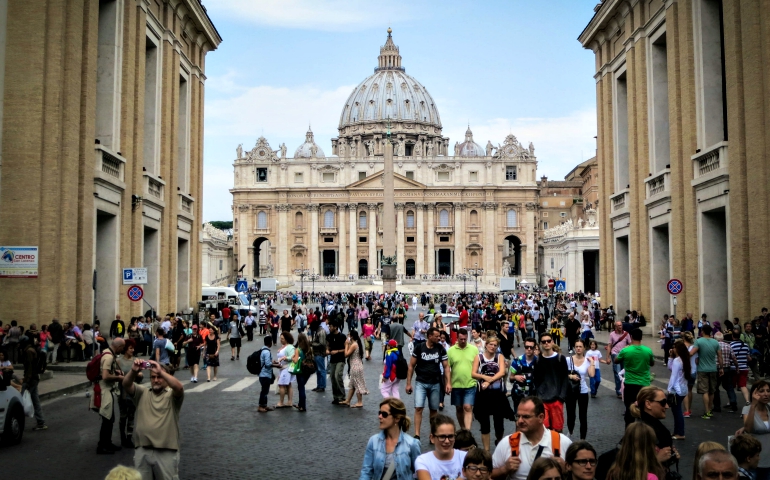 In my colleague Joshua McElwee's interview with Cardinal Oswald Gracias of Mumbai, India, the cardinal reported that the Council of Cardinals that advises Pope Francis had discussed requiring nuncios to consult the laity in the selection of candidates for the episcopacy.

In April, my colleague Bill Tammeus published a column about ordination and election to holy orders within the church. Tammeus, a Presbyterian, comes at the issue differently from a Catholic, as he acknowledges. But denominational differences do not permit getting history wrong: Quoting from a book about Dominicans in Southern Africa, he writes, "In 1788, John Carroll, the first Catholic bishop in the United States of America, had been elected by his clergy. ... Having seen the priests elect their first bishop, in some places the laity wished to elect their own priests." It is odd to turn to a book about a religious order on another continent for information about an event involving secular clergy in the U.S. If he had consulted a book about the history of the Catholic Church in the U.S., Tammeus would have learned that this episode of lay democracy, known as the trusteeism controversy, was a disaster for the early Catholic community, inviting ethnic rivalries, empowering wealthy contributors, and creating venues for mercurial clergy.

In theory, introducing greater democracy into the Catholic Church sounds like a fine idea. But when we first read The Communist Manifesto or Capital, Marxism seemed like a great idea, too. In reality, of course, communism turned out to be a nightmare, providing neither equality nor freedom to its people. Similarly, if the Catholic Church were to introduce more lay involvement in decision-making tomorrow, the immediate consequence would be a rightward lurch in the consequent decisions.

As my colleague Tom Roberts recently demonstrated, even without official or mandatory consultation of the laity, a lay group like the Knights of Columbus has been able to exert enormous influence within the church because of its ability to contribute cash. The Knights give money to the bishops' conference for their religious liberty campaign, which permitted the proposal to make the Ad Hoc Committee on Religious Liberty a permanent standing committee appear revenue-neutral. I wonder how much the Knights give to support the bishops' effort to combat climate change?

I talk to a lot of people who work in chanceries around the country. And when diocesan officials were figuring out how they were going to deal with employee benefits for same-sex partners of church employees, or when hiring and firing practices were being discussed, or admitting children of same-sex couples to Catholic schools, or whenever a culture-war issue came before the different diocesan boards, invariably it was the clergy who counseled patience and tolerance and the lay advisers who said, "We don't want our kids around those kinds of people!"

Before becoming a priest, a candidate must undergo a minimum of four years of graduate-level theology studies. This is after he has received a grounding in philosophy, either in a regular undergraduate program or in a pre-theology program at a seminary.

Some seminaries are better than others, to be sure, but at least the people of God know that the person mounting the pulpit on Sunday has had some courses in biblical studies and theology, some exposure to the incisive, nuanced thinking of Thomas Aquinas and Augustine and John Henry Newman. We all have had to sit through some bad sermons, but our Catholic parishes do not usually entertain the kind of fundamentalist harangue you would get at some evangelical churches. What is more, a layperson in the church may be brilliant but, in my experience, they are more likely to give evidence of the dictum "A little learning is a dangerous thing."

What is worse, as happened in the case of the trusteeism controversy, the lay faithful would always be tempted to use their temporal power to try to corral spiritual power into ways they found conducive. Who is so naive to think that such a temptation to corruption was unique to the early 19th century?

Or consider how the temporal concerns of the popes affected their exercise of spiritual authority in deleterious ways while the Papal States were still standing. The spiritual independence of the papacy is one of the great achievements of modernity. The role of governments and other wealthy people has diminished from what it was when the church's leaders were all enmeshed in secular society.

Yes, the leaders of the church thought that the Papal States were a guarantor of papal independence and, on paper, that argument made sense. In reality, the collapse of the Papal States has freed the papacy as never before.

I am not saying that introducing laypeople into the decision-making of the church would lead to a re-creation of the Papal States. I am simply pointing out that laypeople are more likely to bring secular considerations to bear on their decisions and, just so, introduce concerns and considerations not proper to a spiritual decision.

I am all for lots of consultation in the selection of new bishops. But increased lay consultation or a hint of democracy in the church will not be any kind of a panacea. And such consultation can't be permitted to encourage ideas about church polity that are wrongheaded. The church is structured hierarchically. Those who walked alongside Jesus of Nazareth clearly saw that "the Twelve" had a distinct role and responsibility within the early Christian community. Congregationalists adopted a democratic polity for their churches: How did that work out? Many of them became Unitarian!

Of course, if the nuncio wants to call me, I would be happy to take his call. Of course, without the laity, the hierarchy would look mighty foolish, as Newman once observed. And, of course, there will always be a danger of clericalism in a church structured as ours is.

But our hierarchic structures produced Pope Francis a couple of years before the American people elected Donald Trump. I will take my chances with the hierarchy.