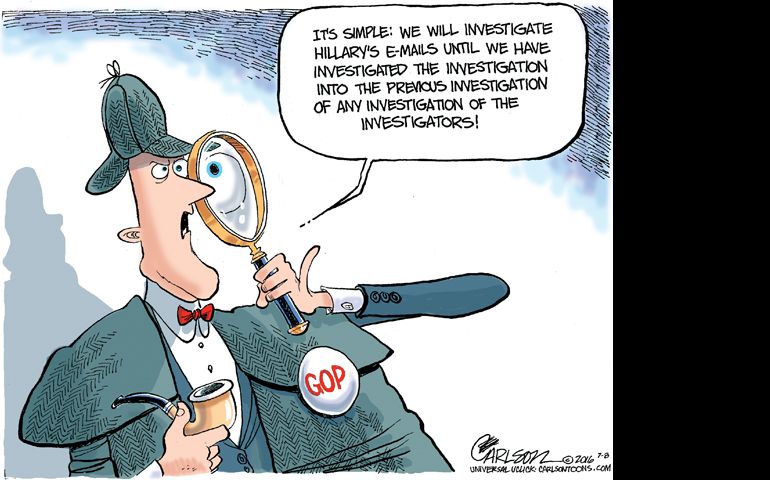 "The American people are sick and tired of hearing about your damn emails!" said Sen. Bernie Sanders in his first televised debate with former Secretary of State Hillary Clinton, way back in October of last year.

Yet, here we are ten months later, Clinton has defeated Sanders for the nomination, and the nation is still talking about those damn emails!

It is hard to believe that the longevity of this story has to do with the content of the emails. The latest batch details efforts by an official at the Clinton Foundation to get special access for a donor to officials at the U.S. State Department, after Clinton had pledged to erect a firewall between the two organizations. It was probably not illegal and it may or may not have been unethical: The donor reportedly wanted to convey information, not ask for a favor. But, the value of the tale to those who despise Clinton, and the danger it poses to her, is that the exchange shows her to be a creature of the establishment where the normal rules need not apply, where your people call my people (and they probably went to school together anyway), and where shortcuts, though risky if exposed to daylight, are taken nonetheless, in no small part because they convey a sense of privilege on all who participate.

Clinton did not make any pledge upon leaving the State Department that she would not give paid speeches. Surely, in 2013, she knew she was likely to seek the presidency. Surely she did not need the money. Surely she knew the behavior of Wall Street investment titans was likely to be a subject of concern in any conceivable Democratic Party. Yet, she gave paid speeches for obscene fees, and gave some of those speeches to Goldman Sachs. The large fees could only make it harder to identify with the struggles of people whose votes she would need. The fact that the checks came from Goldman Sachs could only make it harder to appear like a genuine crusader against Wall Street excesses. Clinton had to know that people would notice. Why did she do it?

"No Drama" Obama doesn't do stuff like give paid speech at Goldman Sachs or chat up the head of the Justice Department when his wife is being investigated or keep around personally loyal aides who nonetheless provoke unnecessary dust-ups (like Philippe Reines or Sidney Blumenthal). He doesn't do it not because he thinks it's wrong but because it's imprudent; it gets in the way and makes it harder to get stuff done.

There is much here that rings true, but Matthews goes even further. He notes that even if you accept the theory of the Clinton loyalists -- that the Clintons get attacked because they are the Clintons, that they are always held to a higher standard, that it almost doesn't matter what they do or don't do, that there really is a "vast right wing conspiracy" -- you still end up with a problem. He writes, "The trouble with the Clinton loyalists' theory is that it encourages a fatalism about the war on the Clintons that causes complacency, and spurs the Clintons to do stuff that really does bring more criticism and scrutiny upon them than they'd endure if they were as careful as Obama has been." He goes on later in the piece to note that this attitude also issues in a cloying self-pity that makes one want to squirm when you see it. Remember this first interview Hillary Clinton did with Tim Kaine on "60 Minutes"?

There is one final problem with the email mess, a problem that is difficult to pinpoint but you can smell it. There is an air of self-righteousness about the Clintons, an attitude that says "We're good people, and good people don't do bad things, therefore, what we did wasn't bad." This is the kind of self-regarding tautology to which powerful people are often painfully prone. I suspect the Clintons did start out with the best of intentions. I suspect that they are still largely motivated by good intentions. But, politics is an ugly business and no one stays pure in it for long. Yet, they cling to the idea this idea of purity the way they clung to the idea that they can somehow encompass all points of view and facts that are directly in contradiction with one another. Way back in 1993, Leon Wieseltier wrote of Bill Clinton:

The most disturbing quality about Clinton, however, is his indifference to contradiction. Not excluding the political middle by not excluding the logical middle: that appears to be the Clinton strategy. And so be can hold in his mind, simultaneously and sincerely, notions that cannot really be held together. The deficit must be reduced, but there must he growth; economic policy will come first, but foreign policy will not come second; the rules about lobbyists will be a light unto the nations, but Ron Brown will be the secretary of commerce; the capital does not understand the country, but (as he told his first meeting with Democratic congressmen) "Washington works better than the country understands"; the persecution of gays in the military must end immediately, but it must end incrementally; the daughter will go to Sidwell Friends, but (in the words of Jean-Paul Belmondo, I mean George Stephanopoulos) "they didn't reject public schools"; and so on. I do not doubt that some of these contradictions denote an admirable attempt to transcend intellectual and political convention. But I suspect that many of them denote a personal inclination toward the deferral of decision. The fear of excluding can then represent itself as a love of including, and make indecision seem like the spirit of inquiry.

In Hillary's case, she can't bring herself to say that there are times when a politician is well advised to lie, so she claims to be open and honest even when it is obvious she has not been. This indifference to contradiction is in the service of the acquisition and retention of power to be sure, but it also serves to increase the deposit of self-regard. Do-gooders have their own demons, and this is one of them.

I do not believe anything we have learned about Clinton's emails indicates that she had any nefarious purpose. It is not even clear that what FBI Director James Comey deemed her “reckless” behavior regarding confidential information on her private email server was any more reckless than using a government server, as those have been hacked too.  It is not even clear to me that, as has been alleged, her hyper-sensitivity to privacy was the key issue. I take her at her word that she wanted a communications method that was easy for her, and I say this as a technological Luddite with a similar desire. It is her reaction to the whole email business that disturbs. Nothing in the emails themselves nor in the reactions comes close in offensiveness or worry to a single day on the campaign trail with Donald Trump. But, in choosing her over him, let's not be blind to her limits or her faults either. "Put not your trust in princes," warns the psalmist, even and perhaps especially the ones for whom you vote.

Removing the Confederate flag is a big deal, or maybe not such a big deal

Thumbs up/down for the press

Clinton on the Trans-Pacific Partnership: Is she committed to a new trade paradigm?