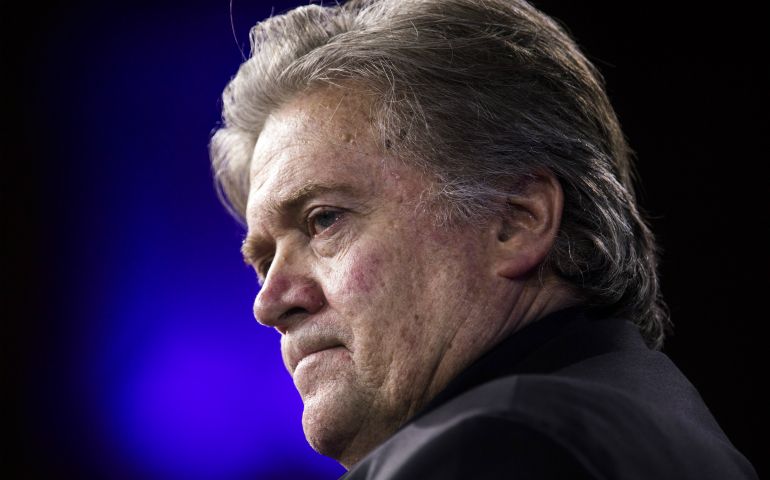 Steve Bannon, White House chief strategist is fond of a book entitled The Fourth Turning: What Cycles of History Tell Us About America's Next Rendezvous with Destiny. And not just fond — Bannon believes this book contains the key to understanding the situation of America and the West at this moment in history. Insofar as the chaotic White House seems bereft of coherence or plan, the fact that Bannon apparently has a clear-eyed belief about understanding the country and the world is even more alarming than it would be otherwise.

In an essay published at The Washington Post on Tuesday morning, Michael Gerson writes:

As the ideologist in Trump's inner circle, Bannon is a practitioner of Newt Gingrich's mystic arts. Take some partially valid insight at the crossroads of pop economics, pop history and pop psychology; declare it an inexorable world-historic force; and, by implication, take credit for being the only one who sees the inner workings of reality.

He goes on to write, viciously but truthfully, that Bannon's philosophy is, like some others, "derived entirely from an airport bookstore." Ouch.

I have not read The Fourth Turning, nor shall I. But the author, Neil Howe, offered a summation of his theory in last Sunday's Washington Post "Outlook" section, and you can read enough there to recognize that Gerson may be on to something about the airport bookstore reading list.

The essential argument is that history moves in cycles, or turnings, each lasting about the length of a generation. In the first turning, cultural and social institutions are on a "high" and "institutions are strong and individualism is weak." Then, in the second turning, those same institutions get attacked and "people suddenly tire of all the social discipline and want to recapture a sense of personal authenticity." In the third turning, it all starts to unravel, and institutions "are weak and distrusted, while individualism is strong and flourishing." Howe believes the 1990s, 1920s and 1850s were all examples of this third turn "notorious for their cynicism, bad manners and weak civic authority." I do not know what Howe did in the 1990s, but I recall attending lots of protests for aid to Bosnia, and I don't recall much in the way of cynicism there.

Howe believes we are at the beginning of a fourth turning in which "our institutional life is reconstructed from the ground up, always in response to a perceived threat to the nation's survival." It is not hard to see how this is reflected in Bannon's talk to CPAC (Conservative Political Action Conference) last week.

There is a word for these kinds of theories: Rubbish. There is no room for moral agency, just the inexorable turns of cyclical fate. Vastly different times and cultures are squished to fit inside the boxes the author creates, yielding remarkable sentences like these:

Anglo-American history over the past several centuries has experienced civic crises in a fairly regular cycle, about every 80 or 90 years, or roughly the length of a long human life. This pattern reveals itself in the intervals separating the colonial Glorious Revolution, the American Revolution, the Civil War, and the Great Depression and World War II. Fast-forward the length of a long human life from the 1930s, and we end up where we are today.

Breathless, no? And so tidy and neat. But I will bet Howe a fancy dinner at the restaurant of his choice that Donald Trump does not know precisely, if at all, what the "colonial Glorious Revolution" was or what it has to do with his beating Hillary Clinton by a few thousand votes in three key swing states.

I wonder, too, why Howe thinks the colonial Glorious Revolution was a more traumatic affair than, say, King Philip's War. True, the war happened a decade earlier, so it doesn't fit the neat temporal template Howe erects, but surely a war in which one in every 16 New England males was killed was a more traumatic affair than the deposition of Lord Andros in the colonial Glorious Revolution. Growing up in Connecticut, I learned about both events, and I have a piece of the Charter Oak, the tree in which the Connecticut patriots hid their charter from Andros, in my living room. Andros' deposition was not the stuff of world historical shifts.

Kevin Phillips, who is a genuine historian, linked the Glorious Revolution with the American Revolution and the U.S. Civil War in his book The Cousins' Wars. He saw in those conflicts an ever expanding determination to place human freedom at the center of political life at the expense of religiously grounded societies in which social hierarchies held sway. I think Phillips had to stretch to make his thesis, although he at least allowed for moral agency, springing from a common, aspirational and unfulfilled moral vision. Howe is playing Twister.

Howe's thesis is, for all their obvious dissimilarities, akin to Francis Fukuyama's. His book, The End of History, saw in the rise of the neo-liberalism a final state of affairs, a culmination not to be replaced. That was silly, too, and it was silly at the time, not only today when Mr. Trump's election victory buried that neo-liberal order.

History did not end. Nor does it run in cycles. It is true that history does not progress as neatly as many self-identified progressives think it does. There is always a downside as well as an upside to social change. But, history is populated not by mere theories, progressive or reactionary. It is populated by living, breathing people, people who make choices, cultures that shift and grow and change, sometimes in ways no one could have predicted even a few years prior. Did anyone think the advent of the nuclear age at Hiroshima and Nagasaki would usher in a relatively stable world order? Did anyone think that Mahatma Gandhi's and Dr. Martin Luther King's embrace of non-violence would slay the repressions they confronted as quickly as they did? Did anyone think same-sex marriage would go, in a decade, from dream to reality, and from an issue that worked for Republicans to one that worked for Democrats?

It is frightening that our president is so unschooled in history. It is even scarier that his chief strategist has bought into this pseudo-history peddled by Howe.