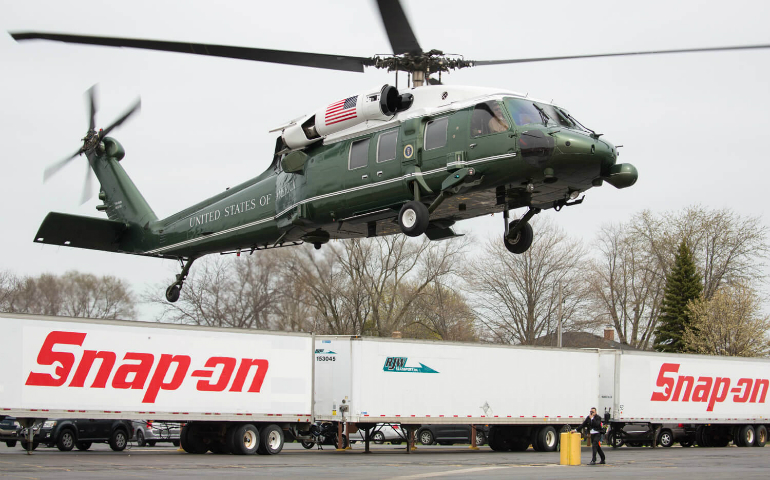 President Donald Trump hit the road on Tuesday, venturing to Wisconsin, one of the "blue wall" states the Hillary Clinton campaign thought would fall into the Democratic column as it had in every presidential election since the Reagan landslide of 1984. Trump went to the Snap-on toolmaker factory in Kenosha to sign an executive order that aims to fulfill his "Buy American, Hire American" campaign pledge.

The order "declares that the policy of our government is to aggressively promote and use American-made goods and to ensure that American labor is hired to do the job," the president said. "We're going to do everything in our power to make sure more products are stamped with those wonderful words 'Made in the USA.' "

One of the order's directives tightens regulations that allow U.S. companies to hire foreign workers under the H-1B visa program. Another directs federal agencies to give priority to domestic-made products and services in their contracting.

There is little reason to object to either directive on its face, but the speech contained a triple scoop of irony.

First, the man who now champions buying American products and hiring American workers has a long history of outsourcing his own extensive line of goods. Trump suits and shirts are made in Mexico. Trump ties are made in China. Trump vodka was distilled in the Netherlands. The executive orders may be the first products with Trump's name on them that were actually "Made in the USA."

The second irony is that the still-young administration has not exactly been friendly to American workers. Trump's first nominee for secretary of labor, Andrew Puzder, famously voiced his preference for robots over human employees: "They're always polite, they always upsell, they never take a vacation, they never show up late, there's never a slip-and-fall, or an age, sex, or race discrimination case." Trump has put on hold an Obama rule that would have extended overtime pay to thousands of workers. And he revoked a rule aimed at leveling the playing field for women workers.

The third irony is that the man who campaigned as the champion of those left behind by the neoliberal economic order has installed as his principal advisers people who were, until yesterday, titans of that neoliberal economic order. Despite calling out first Sen. Ted Cruz and then Hillary Clinton for their ties to Goldman Sachs during the campaign, Trump has filled five key positions with alums of the storied Wall Street firm. The concern here is not potential conflicts of interest: Appointees are subject to laws the president is not in this regard. The concern is that they have drunk deeply at the well of libertarian economic thought and could scarcely bring to the table much in the way of policy ideas that would help the people who elected Trump.

Irony is unhelpful as a basis for conducting politics, still less for legislating. Kenosha is in Speaker Paul Ryan's district, and Trump was there to sign an executive order, not a piece of legislation. The fault lines within the Republican Party, led by a president elected on the strength of disenfranchised white, working-class voters, but a party still largely populated by libertarian and conservative ideologues, will make it hard for Trump to achieve much that will actually help America's workers.

The president said he was planning to unveil an overhaul of the tax code. Will he again turn to Ryan, who had a previous plan in place, and try to turn that plan into law? If so, it is difficult to see how that would do much for workers. A study by the nonpartisan Tax Policy Center showed that 99.6 percent of the benefits of the Ryan tax plan would go to the top 1 percent of wealthiest households over 10 years.

So much for disrupting the dominant economic elites and the laws that make them so dominant. And Trump has to ask himself: How did things turn out in the health care debate when he left the legislative details to Ryan?

Trump continues to promise a big infrastructure proposal, but we are still waiting. The administration is reaching out actively to organized labor, but congressional Republicans, and major GOP donors, see labor as the enemy, not an ally. Those same congressional Republicans will also be as much at pains to avoid working with the Democrats on infrastructure as they were on health care, a strategy that only empowers the hard right in the Freedom Caucus, the group that killed the repeal-and-replace-Obamacare bill.

The president has spoken frequently about making the federal government a friend, rather than an obstacle, to school choice. To be sure, school choice may help struggling school districts in urban areas, but will rural areas, the areas that delivered the White House to Trump, be able to offer real choice? Are there enough students on large swaths of rural America to sustain two or more schools? I don't think so.

Whatever the issue, Trump's pledges to help working Americans seem to run up against two major hurdles. First, the president's skill set for making real estate deals has not transferred well to political deal-making. The administration often speaks with many and conflicting voices. Second, the divisions within the Republican Party are real and they are not going away anytime soon.

As in the case with his newfound empathy for the victims of the Assad regime in Syria, we can all be glad that the president wants to help American workers left behind by the forces of globalization and automation. But desire is one thing and successful deeds are another.