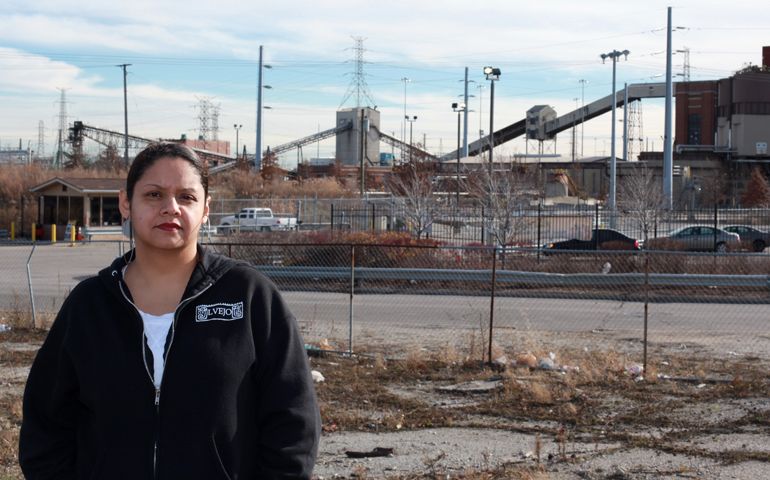 For dedicated environmental activists, hanging on for the long haul is often difficult. It means cultivating limitless patience. It involves growing tough, stubborn hides to withstand the barrage of name-calling, shaming, political resistance and anger opponents dish out.

Kimberly Wasserman has been collecting battle scars in the above categories for 15 years, but her ordeal has transformed into a glorious, major victory. Last month, Wasserman, 36, was named the North American recipient of the 2013 Goldman Environmental Prize.

The Goldman is one of the most prestigious honors given for grassroots green activism. Each April, the San Francisco foundation celebrates the efforts of six activists from around the world by bringing them to the Bay Area and to Washington, D.C., for award ceremonies, press conferences and networking. Each awardee receives $150,000 to further his or her work.

Wasserman earned her prize for garnering enough public and political support to close down Fisk and Crawford, two of the nation's oldest and dirtiest coal-fired plants in southwest Chicago, in the fall. The plants, owned by Midwest Generation, had been nicknamed "cloud factories" by neighborhood kids. For years, the smokestacks had been spewing toxic emissions and coal dust, causing asthma, bronchitis and other respiratory illnesses.

Wasserman, a Chicana, had grown up within a mile of the Crawford plant. She lived in Little Village, a neighborhood of 100,000 residents, most of them Latino families and children.

But Crawford's poisonous clouds did not directly affect her until 1998, shortly after the birth of her first child, Anthony. One morning, when he was just 2 months old, the tyke began gasping for air. His frantic mother rushed him to the emergency room.

"He's had an asthma attack," the doctor said. Wasserman left the hospital with an ailing baby and fiercely angry questions. (As it would later turn out, two of her three children would suffer from asthma.)

What was going on? Why Anthony? Wasserman was in a good position to find out. She had recently gone to work as a community organizer for the Little Village Environmental Justice Organization (LVEJO).

"This was before the Internet, so I had to go to the library to do research the old-fashioned way," she said. Wasserman discovered environmental pollution from the Crawford plant triggered Anthony's asthma.

The news prompted a significant turn in the life of the 21-year-old single mother. Wasserman is the daughter of two dedicated Chicago social activists, Howard Ehrman and Lydia Nieto-Ehrman. She had accompanied them to Washington on many occasions to rally for minimum wage and women's rights and to protest the Iraq war, but Wasserman hadn't seen herself walking in their footsteps for the rest of her life. She dreamed of a career in the liberal arts field after graduating from college.

But something powerful happened as she watched her baby struggle to breathe. Wasserman's progressive DNA genes had been there all along, and they kicked in. The personal became a "close to home" political reality, she told Eco Catholic. "I didn't want to see another mother have to go through what I was going through."

The young mom put college plans on hold and plunged into community activism. Part of her work with LVEJO involved doing door-to-door surveys regarding neighbors' environmental concerns. So as she made her rounds, Wasserman included questions about asthma and respiratory issues. She learned that they were common problems in the community, according to an April 15 article on Grist.

"But so far, all we had was anecdotal evidence," Wasserman told NCR. "We needed scientific backup." It showed up in the form of a 2000 Harvard School of Public health study that confirmed that the coal plants might have something to do with the high rates of asthma and bronchitis in the neighborhood.

It linked more than 40 premature deaths, 550 emergency room visits and 2,800 asthma attacks every year to toxic emissions from the two plants. It cited children as being the most vulnerable to the plants' pollution. Residents had to depend upon nebulizers and oxygen tanks to help them breathe, reports a press release from the Goldman Environmental Fund.

There was even more bitter icing atop this scientific cake. "We found out that the coal power plants didn't supply electricity to the city of Chicago or the state of Illinois," Wasserman said. They learned the administration of former Mayor Richard Daley was unwilling to do anything about the environmental problems.

"Why is it that our community is being sacrificed for the sake of making money for this industry?" Wasserman wondered in the Grist article. "It was on us to make sure that we funneled that anger and resentment in a positive way."

Wasserman began organizing with vigor. She enlisted assistance from faith, health, labor and environmental groups, including the local Sierra Club and Greenpeace office. Together, they created a coalition of clean air activists that went door to door, trying to tell people they deserved to live in a pollution-free neighborhood. Some of them joined LVEJO. Some did not because they were undocumented and were afraid to speak out.

City Hall, however, was unresponsive. After a letter to the administration went unanswered, young people from LVEJO staged an action on the fifth floor of city hall in front of Daley's office. Grist reports that 41 young people laid on the floor and zipped themselves up in body bags and put inhalers in their mouths.

City Hall's response: an angry phone call complaining Wasserman and company had "embarrassed the mayor" by their inappropriate actions.

But time started working in their favor. Daley decided to retire, and in 2011, a new group of politicians came aboard, including Chicagoan Rahm Emanuel, fresh from Washington, D.C., where he had worked in the Obama administration. One of Emanuel's promises if he became mayor was to deal with the power plants.

His announcement re-energized community efforts, and local groups organized themselves into the Chicago Clean Power Coalition. Emanuel was elected mayor. In 2012, a year after his election, he ordered the two plants to upgrade their pollution controls and reduce greenhouse gas emissions. Do it in 90 days or shut down, he ordered. The companies shut down.

Last week, Wasserman, fresh from the grand celebratory jaunt to San Francisco and Washington, D.C., with her husband and three children -- Anthony, Peter and Gabriele -- spoke with Eco Catholic.

What will she do with her prize money? Some of it will go into LVEJO's projects and to training young people in community activism. The rest she will use for college tuition. Wasserman still wants that liberal arts degree.

Meanwhile, does she have any regrets, anything she wished she had been able to change or do differently during her lengthy campaign?

The main issue, she said, would have been able to engage positively with employees from Crawford and Fisk. "We wanted to help them negotiate for decent severance packages, but the workers wouldn't talk with us." Wasserman said she thinks the workers feared their employers would retaliate.

Wasserman said their reaction was disappointing because she believes with all her heart that "we have a responsibility to both sides, not just to those we agree with."

Wasserman said Catholicism has strengthened her resolve to work for environmental and social justice. She converted to Catholicism after her marriage to Harvey Wasserman, a Catholic, in 2004.

"Our faith in God makes us responsible for doing what is right for people and the planet," she said.

Wasserman is continuing to do just that. She and her volunteers are developing the design for a park, which LVEJO helped bring about last year. It is the first park to be built in the Little Village neighborhood in more than 75 years.

And then there is the group's public transit campaign. LVEJO was able to get a new bus line installed in the neighborhood, "but they gave us only a third of the full route, so we are going to advocate for the rest of the route until we get it," she told Grist.

It's a pretty safe bet that they will get their bus line. As Emanuel noted with a smile during a brief Grist video about the coal plant closings, "Kimberly Wasserman is a force to be reckoned with."

Learn more about all the Goldman winners.