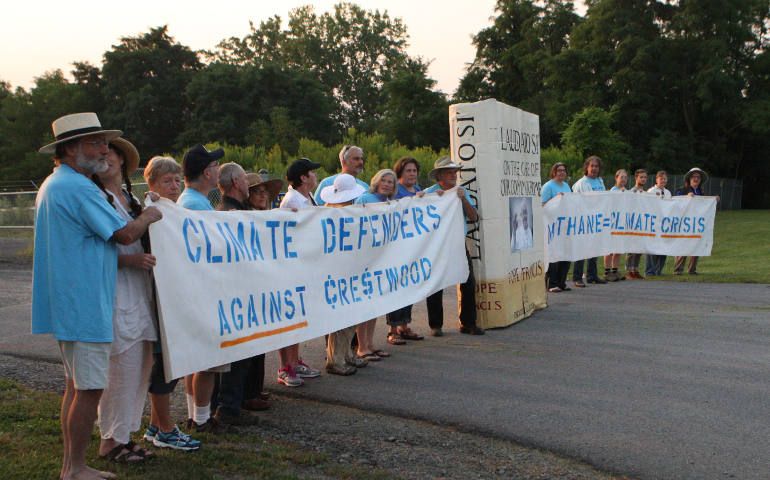 Reading, N.Y. — Accompanied by oversized replica of Pope Francis' encyclical "Laudato Si', on Care for Our Common Home," former Catholic seminarian Paul Flansburg took his place on the line with 18 others in a human blockade.

Their goal Aug. 18 was to stop business as usual at a natural gas and liquefied petroleum gas storage facility operated by Houston-based Crestwood Midstream Partners along the southwest shore of Seneca Lake in New York's picturesque Finger Lakes region.

And they did for 25 minutes.

As the sun rose behind them over the hills to the east in a light early morning fog, participants in the civil disobedience action took turns reading from the pope's historic document. Flansburg was fourth.

Within minutes two tanker trucks approached, their drivers intending to enter the facility. Seeing the people, their banners and the cardboard model of the encyclical, they kept going, turned around and parked alongside New York Route 14, several hundred feet from the gate. It was only a matter of time before deputies from the Schuyler County Sheriff's Department would arrive.

Flansburg and the others, most wearing light blue T-shirts with "We Are Seneca Lake" printed in black on the front, soon were arrested, taken to nearby Watkins Glen to be cited for trespassing and released. It has been a ritual that has been going on every few weeks since October.

Since June 30, the protesters have brought the words of the pope to the site.

A Catholic, Flansburg of Henrietta, N.Y., outside of Rochester, told Catholic News Service he decided it was time to take a stance on behalf of the environment after quietly supporting the blockades for months. Francis' encyclical inspired his action, he said.

"A lot of the ills that were brought up in the pope's encyclical, about how business interests have trumped human interests in such a way that environmental degradation, among other things, is a symptom of capitalism gone amok," Flansburg told CNS.

"I want to preserve the drinking water and the environment. More importantly, I'm concerned about the land around Seneca Lake. It seems to me Crestwood is not. It seems to be the federal government is not either," he said.

Two other similar actions have occurred at the plant since Aug. 18. The most recent, Sept. 10, resulted in the arrest of 29 people including Martha Hennessey, granddaughter of Dorothy Day, co-founder of the Catholic Worker Movement. Overall, 400 arrests have been made.

Participants in the blockades have found that the pope's words on the need to protect the environment as a way to promote human dignity has provided additional support for their campaign to stop Crestwood's plans.

Bishop Salvatore R. Matano of Rochester declined to comment on the issue through a spokesman.

A second grass-roots organization, Gas Free Seneca, also has led the effort to stop the plan to store tens of millions of gallons of liquefied petroleum gas -- propane and butane -- and up to 2 billion cubic feet of natural gas under high pressure in hollowed out salt caverns under the lake, which is the source of drinking water for 100,000 people.

The two groups along with winemaker associations argue that the pressurized storage will force salt through cracks in the cavern formations and into the lake, increasing its salinity. If that happens, they have said, the burgeoning tourism industry and the growing worldwide reputation of the region's winemakers will be threatened.

Sandra Steingraber, distinguished scholar in residence in environmental studies and science at nearby Ithaca College and a We Are Seneca Lake leader, told CNS that the pope's encyclical has spurred more people to risk arrest.

"As always, it's very moving because suddenly people's words and their actions are all one and the same. You're speaking about the need to defend creation and doing it," said Steingraber, who helped persuade Gov. Andrew Cuomo to ban hydraulic fracturing, or fracking, for natural gas in New York in December.

"We feel we're building a thriving economy in this area built on the principles of sustainability," she told CNS. "We're on a ruinous path of a heavy industry that wrecks things and then closes up shop and leaves. Whereas what's already here is a highly populated area with another vision working for renewable energy, sustainable agriculture and safeguarding the natural beauty of this place."

Gas Free Seneca co-founder Yvonne Taylor pointed to near unanimous opposition to Crestwood's plan from local governments bordering Seneca Lake and as far away as Rochester and Syracuse. Only the Reading Town Council and the Schuyler County Legislature have supported the plan. The organization has pushed Cuomo step up and stop the propane and butane segments of the project, which remains under review by the state Department of Environmental Conservation.

Expansion of the natural gas storage segment has won approval from the Federal Energy Regulatory Commission.

Dennis Fagan, chairman of the Schuyler County Legislature and a retired engineer whose company serviced the energy industry, said he had toured the facility and was satisfied that safety concerns are being adequately addressed.

"The opponents have misstated the facts from the beginning of this project," Fagan said. "I was a professional engineer for over 40 years before I retired and I realized much of what the opponents were initially stating was not factual. And Crestwood is our largest manufacturing employer and largest taxpayer, so those are some of the reason I support it."

For its part, a Crestwood official said in an email sent to CNS by M Public Affairs in New York that concerns raised by opponents have not been proved through scientific study.

The company has maintained that no other site "makes sense" for such a storage facility and that it will bring additional jobs and millions of dollars of investment to the region. The facility will assure that New York residents and businesses will have an adequate supply of propane for winter usage, the company has said.

"It's no secret that misinformation incites fear about the project even though regulators have gone out of their way to explain why Gas Free Seneca's and We Are Seneca Lake's claims are unsupported by science and history," Bill Gautreaux, Crestwood's chief marketing officer and president of its supply and logistics group, said in the email in response to questions.

"We're working hard to educate stakeholders about the facility's real benefits, highlight the 60-plus year track record of safe storage operations in the Finger Lakes and explain why claims being made by project opponents are false, including claims that our project will ruin the views from across the lake and that our caverns caused Seneca Lake's saltiness," he said.

The email said that numerous businesses, farmers and labor unions support the plan.

As for the words of Francis, Gautreaux said the company takes "all concerns into account, noting that our project's use of existing infrastructure is an environmentally friendlier option to constructing a new storage facility elsewhere."

Such assurances have not pleased project opponents.

Will Ouweleen, president of O-Neh-Da Vineyard and Eagle Crest Vineyards along the shore of nearby Hemlock Lake, organized the Finger Lakes Wine Business Coalition, which has opposed Crestwood's expansion. He has supported the protests along the Seneca Lake shore.

"This is a full 180 degrees out of phase with what the Holy Father is saying," said Ouweleen, who produces sacramental wine for churches across the country and whose product was used by Francis during Mass Sept. 25 at Madison Square Garden. "I don't know how I feel about climate change, but I do know how I feel about liquid hydrocarbons stored in salt caverns."

All parties are patiently awaiting a decision from the Department of Environmental Conservation, which has been reviewing the project since 2010.

"But I feel ethically obligated to stand up to say 'no' in some kind of peaceful way, to say 'this is wrong on every level.'"