Rural families have strong ties to their farms and their faith 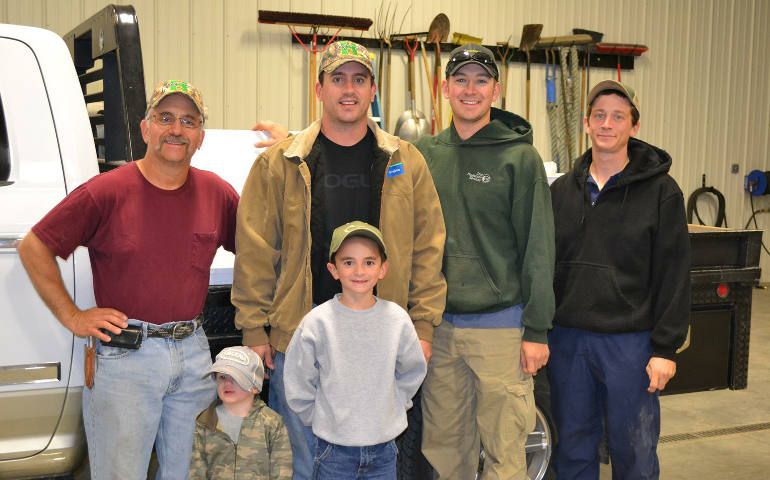 Tony Horinek poses in 2014 at his farm in Colby, Kan., with his sons, Clint and Aaron, and full-time employee Martin Lager, right. In front are Aaron's sons Simeon and Edward. (CNS photo/Photos courtesy of the Horinek family)

He and his wife, Anita, have farmed west of Colby since 1981. Now son Aaron, his wife, Elisa, and three sons are part of the farming operation. A second son, Clint, and his wife, Sarah, and their six children return to help with harvest, although they now live about 170 miles to the east in Beloit.

"It's just been wonderful," Tony said. "When I started college, I didn't know if I'd be a farmer because I didn't have a farm to go to. The Lord directed us. We're so blessed to have grown to the size we are. I didn't figure the boys would come back, and I didn't need them, but then the farm grew. It worked out so beautifully in God's plan."

The farm of Horineks, members of Sacred Heart Parish in Colby, is roughly midway between Salina and Denver.

"I've always been interested in stewardship: taking care of the soil and water. With no-till, you're protecting the land from erosion," Tony told The Register, newspaper of the diocese of Salina.

Their Catholic faith is an important part of their lives, the Horineks said. As farmers, after all, there is only so much they can do themselves.

"With all this technology, you think you can control more," Tony said. "We have all this information and knowledge, and I can do the best I can do, but the weather is out of my control. It's what God provides for rain or temperatures. The real key is up to him."

They also strive not to work the farm on Sundays.

"Thirty years ago, we decided we would limit our labors on Sunday," Anita Horinek said. "We only work when it's absolutely necessary. The majority of the time we do not work on Sunday. But it is challenging."

"It's very difficult sometimes," Tony Horinek admitted. "Wheat harvest is about the only exception. But we still go to church in the morning and then out to dinner and then go to the field. We're still honoring the Lord that day."

Aaron has three young sons -- Jude, Simeon and Eli -- and even though the older ones show an interest in farming, he thinks of a different vocation for them.

"We're actually hoping Jude will be our priest," Aaron said. "In fact, I'd rather have three priests than three farmers."

The Horinek sons and Lager, and all three of their spouses, are graduates of Benedictine College, a four-year Catholic school in Atchison.

Tony said they encouraged both sons to consider the priesthood, "but they did the next best thing and brought back holy wives," he said.

For Marvin and Arlene Riedel of rural Ellis, Kansas, farming and a rural lifestyle are all they've known.

Both were raised on farms during a time when the labor required consumed nearly all of the family's time. The only reason to go into town was to buy supplies, sell commodities or attend Mass.

Marvin, one of 10 children, was already helping on the farm alongside his parents and siblings at an early age. By seventh grade he was driving a tractor, much like every other boy his age. They worked the land and lived off of it as well.

"We ate chicken all the time and sometimes turkey or fish," Melvin said, adding that they never butchered beef because it had to age and they simply did not have the facilities for that particular process.

During the summer, he recalled, they only went to town for Mass. All summer long, they worked on the farm. No sports, no swimming lessons, no social activities.

Arlene also grew up near Ellis, which is about 110 miles west of Salina. One of five children, her life was much the same as Marvin's. She lived and worked on the farm, attended St. Mary Grade School in town and went to Mass every weekend.

She also learned to drive a tractor at an early age.

When she married Marvin in 1982, she understood they would be farming.

Long active members of St. Mary Parish in Ellis, they passed on the values they learned on the farm to their son and daughter and now to their grandchildren.

Son Brian, a diesel mechanic, has become more involved with the farm and often trades his work on the equipment for livestock.

And then there is encouraging the next generation.

"My grandson," Marvin said, "loves to ride on the 'buddy seat' in the tractor with me."