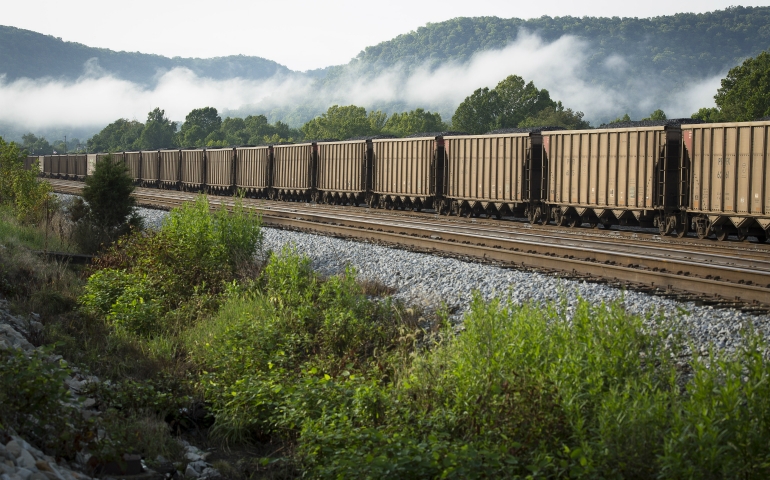 A train carries coal near Ravenna, Ky., in this 2014 file photo. Bishop Frank J. Dewane of Venice, Fla., chairman of the bishop's Committee on Domestic Justice and Human Development, said in a statement March 29 that President Donald Trump's executive order calling for a review of the Clean Power Plan jeopardizes environmental protections and moves the country away from a national carbon standard. (CNS photo/Tyler Orsburn)

President Donald Trump's executive order calling for a review of the Clean Power Plan jeopardizes environmental protections and moves the country away from a national carbon standard to help meet domestic and international goals to ease greenhouse gas emissions, said the chairman of a U.S. bishops' committee.

The executive order, signed March 28 at the U.S. Environmental Protection Agency, fails to offer a "sufficient plan for ensuring proper care for people and creation," Bishop Frank Dewane of Venice, Fla., chairman of the U.S. Conference of Catholic Bishops' Committee on Domestic Justice and Human Development, said in a statement March 29.

Trump, flanked by coal miners, said during the signing ceremony that his goal was to drive energy independence, bring back coal-mining and manufacturing jobs, and reduce the cost of electricity.

Explaining that the U.S. bishops have joined Pope Francis in supporting environmental stewardship and has long called for the U.S. to curtail carbon emissions, Dewane said the order "means that, sadly, the United States is unlikely to meet its domestic and international mitigation goals."

The cardinal said that the president's actions in both areas present "a challenge to us," adding, "Fortunately, in the United States, there are dissenting voices, people who are against Trump's positions." He expressed hope those voices would emerge and lead Trump to reconsider his decisions. Another potential force in swaying the U.S. president, Turkson said, could come from China.

"While Trump is moving in the opposite direction, there is another great power in the world, China, which is showing different signs, as if America is creating a vacuum that China is filling," the cardinal said, according to Reuters.

The U.S. bishops have called for a national climate standard in recent years without supporting any particular economic, technical or political approach.

Archbishop Thomas Wenski of Miami, who preceded Dewane as committee chairman, welcomed the Clean Power Plan when it was introduced in August 2015. He called it "an important step forward to protect the health of all people, especially children, the elderly and poor and vulnerable communities, from harmful pollution and the impacts of climate change."

The international accord to address climate change seeks to hold average global temperature rise "well below" 2 degrees Celsius (3.6 degrees Fahrenheit) and to pursue limiting warming to 1.5 degrees C — a more stringent threshold advocated by many developing and island nations.

"Many states have already made great progress toward carbon mitigation goals under the CPP, and this momentum ought to be encouraged and not hindered," he said.

In his statement, the bishop cited Francis' encyclical "Laudato Si', on Care for Our Common Home," which focuses attention on "the cry of the earth and the cry of the poor."

"With this recent order," Dewane continued, "the administration risks damage to our air, our waters and, most importantly, our people, particularly the poor and vulnerable, without proposing a concrete and adequate approach to meet our stewardship obligations as a nation."

On March 30, a coalition of environmental groups brought two federal lawsuits against the Trump administration in Montana, one opposing a piece of the executive order that lifted a moratorium on new coal leases on federal land, and another challenging the issuance of a permit to TransCanada for construction of the Keystone XL transnational pipeline. Both suits say that the federal government failed to conduct necessary environmental impact statements before approving the moves.

In the three days since Trump signed the executive order, a number of Catholic leaders and organizations joined Dewane in opposing the actions.

The Jesuit Conference of Canada and the United States have urged people to call on their elected officials in Congress "to oppose the recent Executive Order, and instead to work together in a constructive way to enact policies that reduce our country’s contribution to climate change, protect poor and vulnerable people, and care for our common home."

The Jesuits said that in Laudato Si' Francis "makes clear that climate change is one of the principal challenges facing society and the global community," and that the social and environmental problems facing the world are not separate but intimately connected and require an integrated response.

In a statement, Catholic Relief Services, the international humanitarian arm of the U.S. Catholic Church, said it was "profoundly disappointed" by Trump's executive order rolling back climate policies and by proposed cuts to international funding, such as financing for the Green Climate Fund, for those most at risk of the impacts of climate change.

"As Pope Francis made clear in his encyclical on the environment, climate change is real, it is driven by carbon emissions, and we have a moral obligation to stop damaging the environment and help those who have been harmed by it," Bill O’Keefe, CRS vice president for government relations and advocacy, said in a statement. "Investments in climate resiliency are investments that help small farmers deal with drought, and poor villages strengthen their defenses to typhoons and floods — these are the people Pope Francis called on us to help."

O'Keefe added that the impacts of climate change are already being seen in various parts of the world, including in hurting agriculture, spreading disease and worsening natural disasters.

"Refusing to help now will only lead to more conflict, migration and instability, and that is not in the U.S. interest," he said.