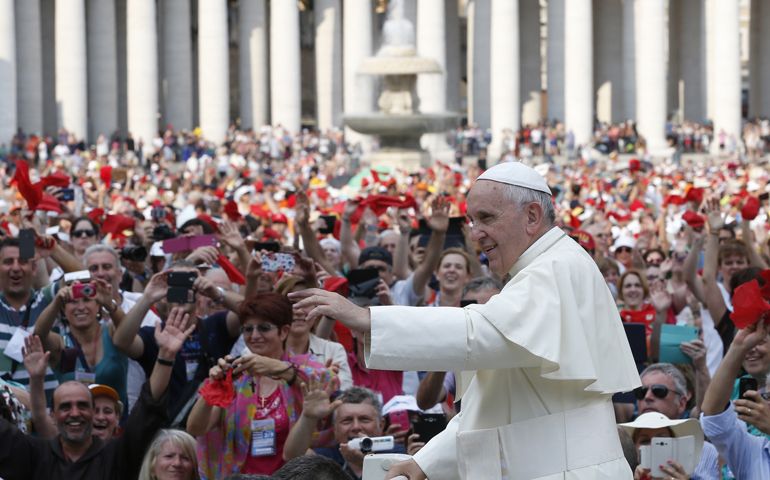 Pope Francis arrives to greet participants in the Renewal of the Spirit meeting Friday in St. Peter's Square at the Vatican. (CNS/Paul Haring)

Vatican City — Catholics, Protestants and Orthodox must pray together and work hand-in-hand helping the poor, Pope Francis told thousands of Catholic charismatics and members of other Christian communities.

If the devil "unites us in death, who are we to divide ourselves in life?" he said, adding that all Christians can and must pray together, as they have all received the same baptism and are striving to follow Christ.

More than 30,000 people gathered in St. Peter's Square on Friday to take part in an ecumenical gathering of reflection, prayer and song dedicated to praying for unity and for those killed for their Christian faith around the world. Italian tenor Andrea Bocelli and Israeli singer Noa were part of the lineup of performers.

The pope invited members of the Renewal in the Spirit to St. Peter's Square as the Italian branch met for its national meeting July 3-4. Leaders from the Lutheran, Anglican and Orthodox faiths as well as Louie Giglio, founder and leader of the Passion Movement in the United States, also attended the audience.

The pope said Christian unity was the work of the Holy Spirit, which meant Christians need to pray together in a "spiritual ecumenism, an ecumenism of prayer."

He said some people may not realize they can pray with Christians of other denominations, adding that people must do so because "all of us have received the same baptism, all of us are following the path of Jesus, we want Jesus."

"All of us have caused these divisions in history, for many -- but not good -- reasons. But now is the time that the Spirit is making us think how these divisions will no longer do, that these divisions are a counter-witness and we must do everything to go together" in prayer, charity, work and reading the Bible because "then the Spirit will do the rest."

The "blood of martyrs" is already uniting divided Christian communities, he said, as the indiscriminate persecution and murder of Christians worldwide has shown.

Those who hate and target Christians are not interested in finding out whether they are Lutheran or Methodist, he said; it is enough that they are committed to Jesus Christ. The killers "aren't confused, they know there is a common root there" and they have no problem recognizing it as the devil guides them, he said.

The pope asked that Christians work together to help people have a personal encounter with Jesus Christ, encouraging the formation of small groups based on one-on-one relationships since "huge gatherings often just end there" with little follow-up.

He also reminded leaders not to forget they are really servants.

The devil tempts founders and leaders to believe they are indispensible and that they, not Jesus, are the ones in charge, he said.

"Forgive me for saying so, how many leaders become peacocks? Power leads us to vanity" and pride, which can also lead to corruption, he said.

Soon a religious movement or association can become tainted by authoritarian or selfish rule and the community can no longer be "renewed by the Spirit," he said.

Positions of leadership in the church should come with term limits, the pope said. "There are no leaders for life in the church."

There is no other Lord than Jesus and there is no one in the church who is indispensable except the Holy Spirit, he said.

Fifteen months in, Pope Francis can still surprise us