Even complaining to God is a form of prayer, pope says 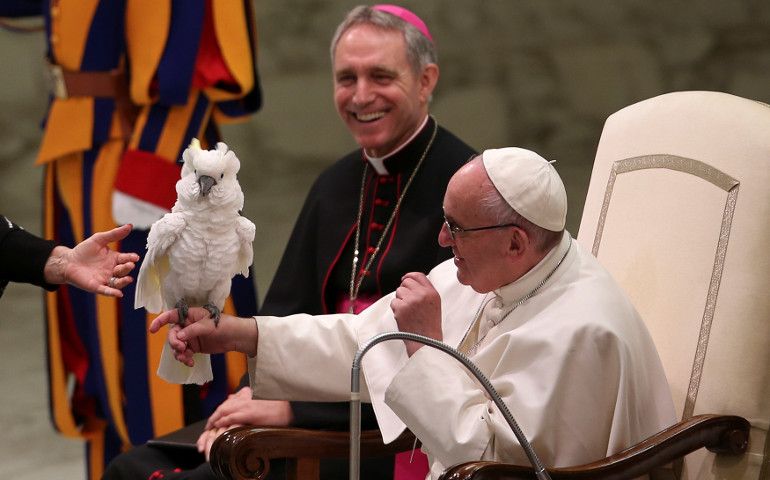 Pope Francis receives a parrot from a performer with the Golden Circus during his Dec. 28 weekly audience in Paul VI hall at the Vatican. (CNS / Reuters / Alessandro Bianchi)

Vatican City — To complain to God in moments of doubt and fear like Abraham did is not something bad but rather is a form of prayer that requires the courage to hope beyond all hope, Pope Francis said.

While in life there may be times of frustration and darkness, "hope is still there and it moves us forward," the pope said Dec. 28 during his weekly general audience.

Entering the Paul VI audience hall, the pope greeted thousands of pilgrims from all over the world. Among those present was a group of performers from Italy's Golden Circus, who performed several acrobatic feats and entertaining performances at the end of the general audience.

The pope even participated in one of the performances. As he and an illusionist grabbed the ends of a tablecloth, they seemingly made a small nightstand levitate to the amazement and applause of the pilgrims.

During the audience, the pope continued his series of talks on Christian hope and reflected on the life of Abraham who, along with his wife, Sarah, left his homeland with hope in God's promise of a son.

This hope, he said, gave Abraham the ability to "go beyond human reason, and worldly wisdom and prudence" to believe in the impossible.

"Hope opens new horizons; it makes us able to dream that which isn't imaginable. Hope makes us enter into the darkness of an uncertain future to walk in the light," the pope said.

However, this path is not without its difficulties, even for Abraham, who, after months of travel, began to doubt God's promise of a son borne by his wife, Sarah.

It is in this moment, the pope said, that Abraham prays to God in the dark of night, a darkness that mirrored his "disappointment, discouragement and the difficulty of continuing to hope in something impossible."

Faith is not just silent acceptance or a "certainty that secures us from doubt and perplexity," but it also means "to argue with God and show him our bitterness without 'pious pretenses.'"

"'I became angry with God, I told him this, this, and that.' But he is a father and he understands you; go in peace. You must have this courage. This is hope," the pope said.

"To believe, it is necessary to know how to see with the eyes of faith; we all may (look up and) only see stars, but for Abraham, they become a sign of God's faithfulness," the pope said. "Hope never disappoints."

Even complaining to God is a form of prayer, pope says

Pope Francis to head to Latin America for 'homecoming' trip

Benedict rejects rumors on why he resigned as “simply absurd”