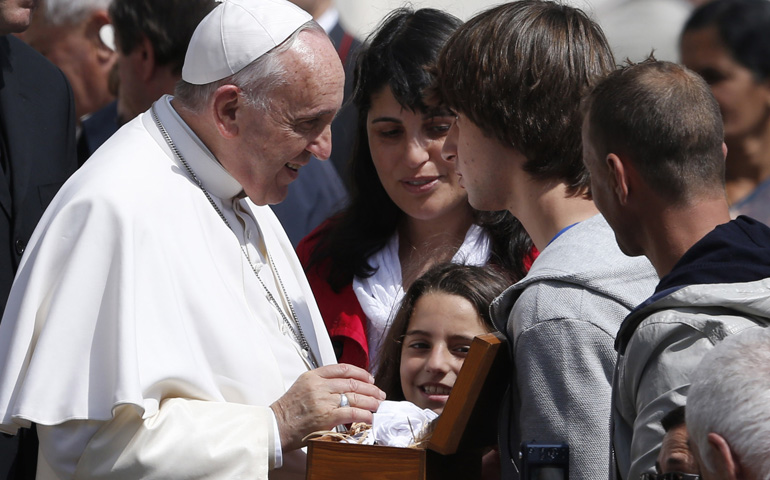 Pope Francis talks to young people during his general audience Wednesday in St. Peter's Square at the Vatican. (CNS/Paul Haring)

Pope Francis on Wednesday backed efforts for equal pay for men and women who perform the same work, saying that continuing disparities in pay for women are a "pure scandal."

Reflecting during his weekly general audience on the "radical equality" he said Christianity proposes between husbands and wives, Francis said Christians around the world "must become more demanding" in emphasizing that equality.

"For example: supporting with conviction the right of equal compensation for equal work," he said.

"Why is it expected that women must earn less than men?" he asked. "No! They have the same rights. The disparity is a pure scandal."

Francis spoke Wednesday to crowds in St. Peter's Square as part of a wider reflection on the role of marriage in society. The pope addressed particularly lower rates of marriage among young people, saying that people around the world "must reflect with great seriousness" on the reasons for that decline.

Addressing several possible reasons for lower numbers of those who choose to marry, the pope also made clear that he does not think the decline is due to recent movements for women's rights or women's emancipation.

"Many consider that the change occurring in these last decades may have been set in motion by women's emancipation," Francis said, calling that "an insult! No, it is not true!"

Continuing, the pope said blaming the problem on efforts for women's rights "is a form of chauvinism that always wants to control the woman."

Francis also reflected Wednesday on the Gospel account of Jesus' first miracle, at which Jesus is said to have multiplied the available wine at a wedding feast.

Saying that men and women are God's "masterwork," the pope said Jesus "begins his miracles with this masterwork, in a marriage, in a wedding feast: a man and a woman."

"Like this, Jesus teaches us that the masterwork of society is the family: the man and woman that love each other," he said. "This is the masterwork!"

Continuing by mentioning the lower numbers of marriages globally, Francis said those who suffer the most when spouses separate are the children.

"If you experience as a child that marriage is a bond 'for a fixed time,' unconsciously for you, it will be so," the pope said. "In effect, many young people are led to renounce the ... irrevocable bond of a lasting family."

"I believe that we must reflect with great seriousness on why many young people 'do not feel like' getting married," the pope continued. "There is this culture of the provisional -- all is provisional, it looks like there is nothing definitive."

Francis then said that Christian marriage, from the earliest times of the faith, helped defeat an inequality between men and women, where it was "the right of husbands to repudiate wives, even for false and humiliating reasons."

"The Gospel of the family, the Gospel that truly announces this sacrament, beat this culture of habitual repudiation," he said.

"The Christian seed of radical equality between the spouses must today bring new fruit," he continued. "The witness of the social dignity of marriage will become truly persuasive for this way, the way of witness that attracts."

Francis added that part of the attraction for nonmarried couples to the witness of married Christian men and women is "the way of reciprocity between them, of complementarity between them."

"Christians do not marry only for themselves. They marry in the Lord in favor of the whole community, of the whole society," the pope concluded his audience, saying he would return to the subject of marriage next week.