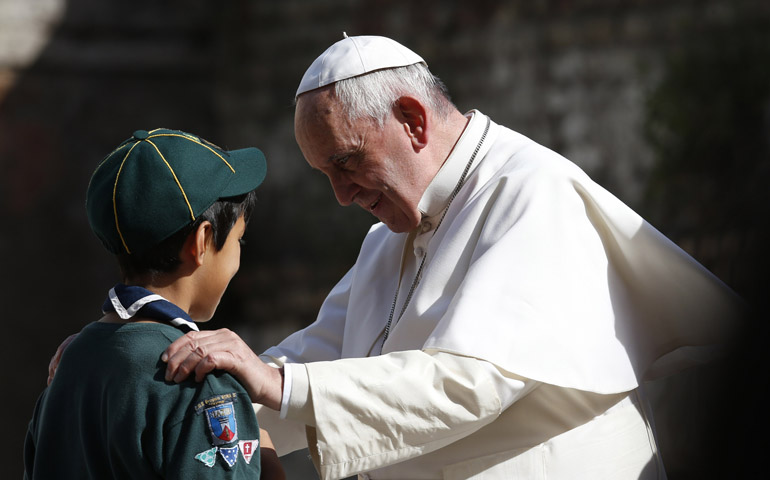 Pope Francis greets a Scout on Sunday while visiting Queen of Peace Parish in Ostia on the outskirts of Rome. (CNS/Paul Haring)

One of the key hallmarks of the Christian life is not whether you can always stop yourself from making errors or committing sins, Pope Francis has said. The hallmark, the pope said, is if, after having made an error, you are able to get back on your feet and go forward.

Speaking Sunday to a group of young people during a visit to a parish outside Rome, the pontiff told the youth to make good choices in life. But he also told them that if they make mistakes they can always put themselves back on the right path.

Giving the example of a young person who is supposed to do homework but instead plays on the street, the pope quoted from a song lyric he said he remembered: "'The most important thing is not not to fall but not to remain fallen.'"

"We all fall, we all make errors, true sins, all of us," Francis told the young people.

"But what is the witness?" he asked. "To get up with the grace of God; this is the witness. And that restless heart gets up and says: 'Yes, I am a sinner, I did wrong, but I go ahead because the Lord is with me.'"

"This is that which the world has need from you ... young people," the pontiff told them. "A witness of going always farther, going ahead; although we are weak, but we must go ahead."

Francis was speaking Sunday during a visit to the parish of Holy Mary Queen of Peace, about 20 miles southwest of Rome in the historic port city of Ostia.

The pope also celebrated Mass during the visit, after which he met with a group of older people and sick people, and had a brief meeting with families with children being baptized this year.

Addressing the young people, Francis focused especially on encouraging them to find joy in their lives -- saying that joy is not something you can buy, but is a gift from God.

"Joy is not bought at the market; you cannot buy it," the pope told the youth. "Joy is a gift, joy is a gift of the Holy Spirit and we have to ask for it: 'Lord, give me joy.'"

"If I am sad, if I am down, if I am lazy and do not know what to do, I have to ask to the Holy Spirit for joy and he will give it to me, because it is a gift that comes from him," said the pontiff.

Francis then imitated someone who questions his advice by saying, 'Father, in the ugly moments joy hides itself, joy does not come.'

Then, the pontiff told the young people that sadness is "truly selfishness," a mark of "selfish persons that want everything." Such people, Francis said, are "like children that do not share candy."

"If a child does not share the candy with his friends, it is an ugly sign," said the pope. "If I have two candies, I give one to my companion and one for me."

"When we cheat others with these dirty deals that are available to everyone, we are dead branches, we do not remain in Jesus," he continued. "To remain in Jesus is to do the same things he did: To do good, to help others, to pray to the father, heal the sick, help the poor, have the joy of the Holy Spirit."

"A beautiful question for us Christians is this: Do I remain in Jesus or am I far from Jesus?" said the pontiff. "Am I united to the vine that gives me life or am I a dead branch that is incapable of giving fruit, [of] giving witness?"

Francis also said that Jesus talks about those who "look like disciples of Jesus but do the opposite of a disciple of Jesus," calling them "hypocritical branches."

"Maybe they go every Sunday to Mass, maybe they make the false face, all pious, but then live like they were pagans," said the pope of those people. "And [of] these, Jesus, in the Gospel, calls them hypocrites."

"Jesus is good, he invites us to remain in him," said the pontiff. "He gives us the strength and if we slip into sin -- we are all sinners -- he pardons us, because he is merciful."

During his visit with the group of older people and sick people at the parish, the pope asked for their prayers in a special way.