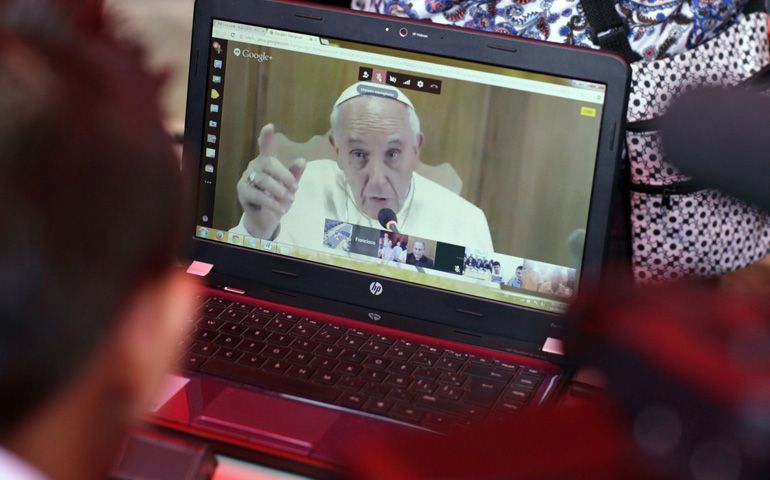 Vatican City — The wisdom of "It takes a village to raise a child" has been lost as kids are either overprotected by permissive parents or neglected, Pope Francis said.

"The educational partnership has been broken" as families, schools and society are "no longer united together for the child," he said Thursday after holding his first Google Hangout -- a live video conversation -- across five continents with teenagers who belong to the international network of "Scholas occurentes," uniting students of all faiths and cultures.

Parents and teachers used to stick together to teach kids important values, the pope said, recalling when he got into trouble in the fourth grade.

"I wasn't respectful toward the teacher, and the teacher called my mother. My mother came, I stayed in class and the teacher stepped out, then they called for me," he told a group of educators and experts involved with the worldwide Scholas network.

"My mom was really calm. I feared the worst," he said. After getting him to admit to his wrongdoing, his mother told him to apologize to the teacher.

The pope said he apologized and remembered "it was easy and I was happy. But there was an Act 2 when I got home," insinuating stiffer punishment had followed.

However, today, "at least in lots of schools in my country," if a teacher notes a problem with a student, "the next day, the mother and father denounce the teacher," he said.

The family, schools and culture have to work together for the well-being of the child, he said. People have to "rebuild this village in order to educate a child."

All of society also needs to help children and young people who are homeless, exploited, victims of violence or without any prospects, he said.

The pope pointed the blame on today's "culture of disposal" and "the cult of money" for creating and perpetuating adults' apathy to or complicity in the mistreatment of kids.

This is why "it's very important to strengthen bonds: social, family and personal ties" with kids and young adults, and create an environment that helps them approach the world with "trust and serenity."

Otherwise, kids will be "left only with the path of delinquency and addiction," he said.

The pope's comments came at the end of an afternoon encounter to launch scholas.social -- a new social network for students from all over the world to cooperate on environmental and social causes, sport and art initiatives, and charitable activities.

The Scholas initiative was begun in Buenos Aires, Argentina, and supported by its then-Archbishop Jorge Bergoglio, who also used to teach high school when he was a young Jesuit priest.

When he became pope, he asked fellow Argentine Bishop Marcelo Sanchez Sorondo, chancellor of the Pontifical Academy of Sciences, to expand the network's reach and impact.

With a small digital camera and studio lights aimed at him in the Vatican synod hall, the pope took questions from five Scholas members, who were linked in from Australia, Israel, Turkey, South Africa and El Salvador.

The pope urged the young people to build bridges through open and respectful communication, in which they listen carefully to others and exchange experiences, ideas and values.

Sina, a teenage boy in Istanbul, thanked the pope for letting more than schools and students come together, "but also our beliefs and hearts." He then asked the pope if he thought the future was going to get better or worse.

"I don't have a crystal ball like witches do to see the future," the pope answered, adding that what the future will be like is in the hands of today's young people.

The future "is in your heart, it's in your mind and your hands," and if people cultivate constructive thoughts and feeling and do good things, "the future will be better."

He said young people need two things: They need wings to fly and the courage to dream of big things, and they need strong roots and respect for their culture, their heritage and all the wisdom passed down from their elders.

He urged the teens to speak out against war and injustice, and to stick together like a team, defending each other against "gangs" and other negative influences that only seek to destroy and isolate people.

His last piece of advice, he said, came from Jesus, who often said, "Be not afraid!"

"Don't lose your nerve. Don't be afraid. Keep going. Build bridges of peace. Play as a team and build a better future because, remember, that the future is in your hands."