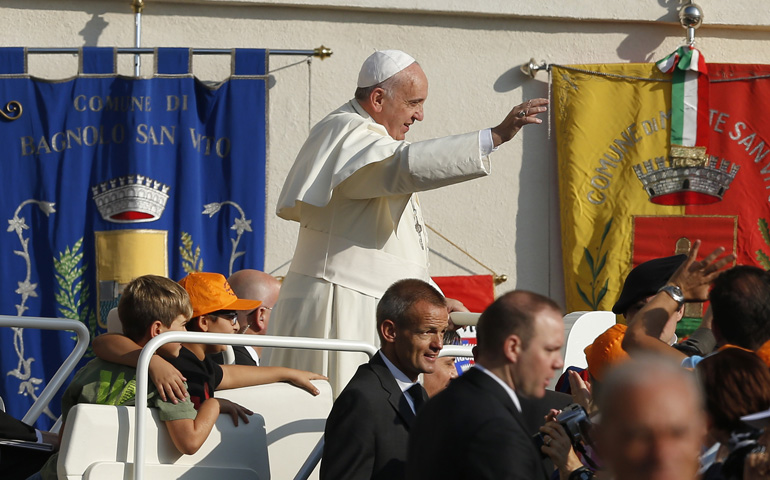 Boys ride in the popemobile as Pope Francis arrives to lead his general audience Wednesday in St. Peter's Square at the Vatican. (CNS/Paul Haring)

Unable to resist telling the world about a personal event that is dear to his heart, Pope Francis said that 70 years ago to the day, he celebrated his first Communion.

"They say that you shouldn't talk about personal things, but I can't resist the temptation," he said at his weekly general audience Wednesday in St. Peter's Square.

"Today I am so thankful to the Lord because 70 years ago, I made my first Communion," he said with a broad smile. "Let us all thank the Lord for our baptism, all of us thank him for our first Communion."

The 77-year-old pope revealed the personal tidbit to underline what it means to enter into communion with the Catholic church and to seek communion with Christians who belong to other confessions or traditions.

This theme of Christian unity was part of the series of audience talks the pope has been giving on the nature of the church. Leading the general audience meant Pope Francis skipped the morning session of the extraordinary Synod of Bishops, which is meeting Oct. 5-19 to discuss the pastoral care of families.

In his catechesis, the pope lamented the long history of divisions among Christians, saying such separations "wound the church and wound Christ," whose desire is "that they may all be one, so that the world may believe."

People's efforts to share the Gospel message will be "much more credible" when all Christians show they are "able to live in communion and love each other," the pope said.

Unity was already under threat while Jesus was still with his disciples, who would argue "among themselves who was better, who was more important," the pope said. In fact, history shows "the church is tempted by evil, which tries to divide her, and has been marked unfortunately by serious and painful divisions;" some breaks have lasted so long it's hard to recall all the reasons for the separation to begin with and to find possible solutions, he said.

The reasons Christian communities are divided, he said, include differences in "dogmatic and moral principles and theological concepts, pastoral differences, political motives and self-interest to the point of clashing due to resentments and personal ambition."

But one thing is certain, he said, "in one way or another, behind these lacerations there is always pride and selfishness, which are the cause of every disagreement and make us intolerant, incapable of listening and accepting those who have a view or a position that is different from ours."

What can Christians do today in light of so many divisions, he asked. Will people be resigned to the current state of affairs and give up, be indifferent, "or will we firmly believe that one can and must walk in the direction of reconciliation and full communion?"

Full communion, he said, is "everyone being able to participate together in the body and blood of Christ."

Catholics are called to pray for Christian unity, be open to "dialogue and encounter," welcome what is "valid and positive that is offered us even from those who think differently from us or who pose a different position."

The pope said, "It's painful" to see so many divisions among Christians when they all believe in Jesus Christ as Lord, God the Father and the Holy Spirit.

Focusing on what unites Christians and not what divides them involves "concretely adhering to the truth, together with the ability to forgive, feeling a part of the same Christian family" and working together in charity helping others, he said.

Let theologians debate and discuss the issues at hand and "seek the theological truth because it is a duty," he said. "But we, we will walk together, praying for one another, doing charitable work and that is how we will build communion by walking together."

Later in the audience, the pope expressed his support of organ donation, calling it "a distinctive witness of love for others."

Pointing to the Oct. 11 European day of awareness about organ donation, the pope emphasized the need to safeguard the rights of donors by ensuring "certainty of death," given the existence of some questions about methods of ascertaining brain death in an individual.

Pope Francis asked that "abuses, trafficking and the sale [of organs] be avoided."

While riding in his popemobile to greet pilgrims at the beginning of audience, Pope Francis pointed to an exuberant young boy, who was cheering along with his classmates, all sporting orange baseball caps.

The pope gestured as if to ask the boy if he wanted to go for a ride, and the boy enthusiastically agreed and tried to jump the high wooden barrier, succeeding only with the help of a Vatican guard. One of the boy's classmates didn't want to be left behind and the pope gestured for him to come along, too.

The two boys, about 8 or 10 years old, sat down behind the pope in the popemobile, hugged each other and pumped their fists in the air with excitement.

The pope let them ride several laps around the square, and when he brought them back to their group, a guard insisted the boys not get down without giving the pope a kiss on the cheek.